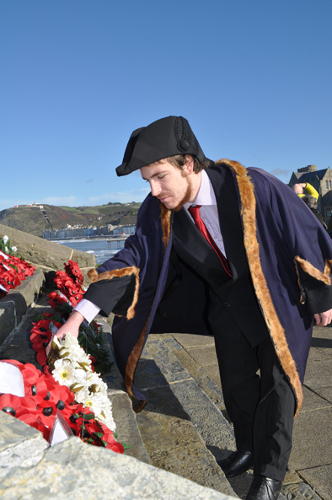 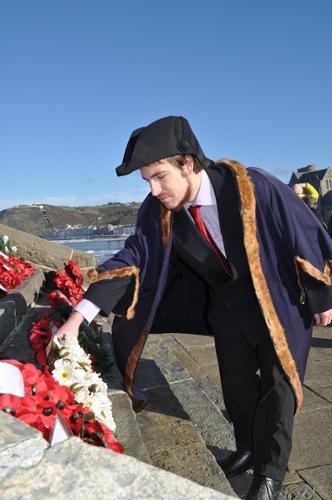 As you read, imagine the contrast between the sea of red poppies gushing from the Tower of London and four fragile white poppy wreaths laid on a storm-lashed memorial in a small seaside town. On Remembrance Sunday, Aberystwyth town council, Aberystwyth Peace and Justice Network (AP&JN), Women in Black and Côr Gobaith laid white poppy wreaths at the war memorial in a moving ceremony attended by around 60 people.

Once again this year, the ceremony was held separately from the British Legion commemoration. Although AP&JN had written to the Aberystwyth branch of the Legion to ask if the white poppy wreaths could be laid at the same time, as in previous years, the response was negative. The Legion insists that many organisations would withdraw. Michael Freeman of AP&JN said: ‘This suggests a great misunderstanding of what the white poppies represent.’

On the Tuesday after Remembrance Sunday, town councillor Alun Williams discovered the white poppy wreaths ripped from the war memorial and dumped in a bin.

On the Friday (14 November), in a shorter but even more moving ceremony, the white poppy wreaths were laid again. Participants also gathered up red poppy wreaths that had been scattered by high winds and cable-tied all the wreaths to the memorial.

This generosity of spirit illuminates a telling difference between those who, whether out of ignorance or prejudice, removed the white poppy wreaths and those who replaced them. Councillor Jeff Smith said: ‘I’m shocked and disappointed that the wreaths were torn down. This act was disrespectful to all those who’ve died, been injured or suffered in war. Like many other councillors, I’ve attended the white poppy ceremony for several years, as well as the red poppy ceremony, and it’s always been very poignant and respectful’.

‘Blood Swept Lands and Seas of Red’, the Tower of London installation, features 888,246 red poppies, one for each British and Commonwealth soldier killed during the First World War. The white poppy is a symbol of grief for all people of all nationalities, armed forces and civilians alike, who are victims of wars everywhere and always. Those who have marvelled at Blood Swept Lands and Seas of Red might spare a moment to picture the battered white poppy wreaths in Aberystwyth. This year more than ever, remembrance must not mean forgetting the full story of a past which defines the challenge for all our futures: Never Again.