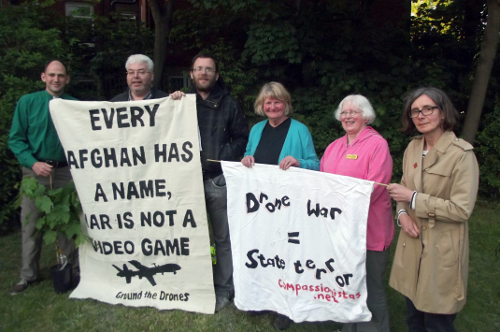 On 7 October, six peace activists were found guilty of criminal damage during a protest at a British drones base, RAF Waddington in Lincolnshire. They were given a conditional discharge for six months, were fined £10 and ordered to pay £75 in court costs.

Defendant Keith Hebden told PN: ‘The judge recognised the validity of our arguments, saying Waddington was a “legitimate target for protest”. The token order to pay £10 in compensation reads to me like an invitation to press home the campaign to ground the drones.’ 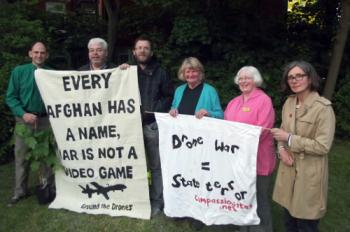 In an unusual move, district judge John Stobart said he would welcome an appeal, after giving this ruling: ‘I find, and not without some hesitation, that the lack of proximity or relationship between the defendants and those in Afghanistan who may be either targeted or hit accidentally by these drones is insufficient. I therefore, with a very heavy heart, find all the defendants guilty.’

Susan Clarkson told PN: ‘Although we were found guilty. I felt the day went well. We were able to put all our points across and the district judge listened carefully to all we had to say.

‘I hope that our words will strike a chord in him and that one day he, and others like him, will join us in resisting war and preparations for war. Then he will be light-hearted!’

By coincidence, the date of the conviction was also the 12th anniversary of the start of the Afghanistan war.

Preventing crime
Susan Clarkson, Christopher Cole, Henrietta Cullinan, Keith Hebden, Martin Newell and Penny Walker all denied criminal damage to a fence at the base. They justified their actions on 3 June — the UN’s International Day of Innocent Children Victims of Aggression — as war crime prevention. The protesters said they believed their actions were justified to prevent the UK from operating armed drones, which they claimed is a breach of international law.

‘During the action I tried to focus on the suffering of the victims of drone strikes in Afghanistan,’ Henrietta Cullinan explained to PN. ‘The whole experience was intensely personal. It was strange then talking about these experiences and deeply-held beliefs in a court, and then even more so being listened to by a sympathetic judge, even though we were eventually found guilty.’

'We were disappointed but not surprised to have been found guilty'

‘We were disappointed but not surprised to have been found guilty,’ Chris Cole told PN. ‘However our evidence that the UK’s use of armed drones was breaching international law clearly moved the judge and he urged us to appeal to a higher court, which we are considering. This is not the end of the road by any means and no doubt RAF Waddington will see many more protests over the coming months and years.’

During the trial, Keith Hebden told the court: ‘The decision to pilot armed drones from Waddington makes RAF Waddington a war zone. It brings the Afghanistan conflict into this country and it puts ourselves in grave danger.

‘If this country becomes part of a war zone, it makes all of our lives less safe. Our intention was to save lives.’

In June, Penny Walker wrote on Chris Cole’s Drone Wars UK blog: ‘With drones, the huge distance between the people making the decision to kill and the people being killed can protect the killers from the reality of their deed. While I was there, I wanted to communicate the reality of a drone strike on Afghan families, and what it is like for them to live in fear.’

Vine and fig tree
The six were detained on 3 June after civilian police were called to the base. By then the activists had planted a peace garden — consisting of a vine and a fig tree — inside the base, and had spent over half an hour taking photographs and leafleting staff.

‘Being part of a group of such fantastic experienced peace campaigners was a great privilege for me. I was extremely lucky to be able to test my thoughts and moral convictions in this way. As a journey it was very personal, heartfelt and spiritual as well as public, that involved interactions with police, security guards, the court, other peace campaigners.’

They placed posters on buildings, hangars and signposts inside the base, with information about the impact drone strikes have on Afghan civilians. The posters were clips and photos from various news sources, including the Guardian and CNN, about drone damage, and included images of children wounded and killed by strikes.

The station, which also houses a squadron of AWACS spy planes, was placed on lockdown until the activists were removed from the site.

While they were initially charged with aggravated trespass and conspiracy to commit criminal damage, those charges were later dropped and replaced with the sole charge of criminal damage to the perimeter fence.

Michel Treharne, prosecuting, said: ‘The damage to the fence was caused by bolt croppers. It was not seen to be done but the bolt croppers were found very close to where the fence had been cut.

‘As a result of the damage, the protesters were able to get through onto the base. They were walking around with cameras and leaflets.’

On the day of the trial, about 20 demonstrators staged an anti-drone protest outside the Lincoln magistrates court, including members of the Drone Campaign Network, the Campaign for Nuclear Disarmament, Stop the War Coalition, and War on Want.

Defendant Penny Walker told PN: ‘The amount of supporters we had, both inside the court and outside with banners and talking to passers-by, was fantastic. I feel part of a very committed and growing group of people determined to stop drone warfare.’

Richard Johnston, who was protesting outside the court, told The Lincolnite: ‘It’s interesting because now war is being waged from our soil, just down the road. We are very near a war zone. You think of all the messages that are actually going out from that base and killing people.’