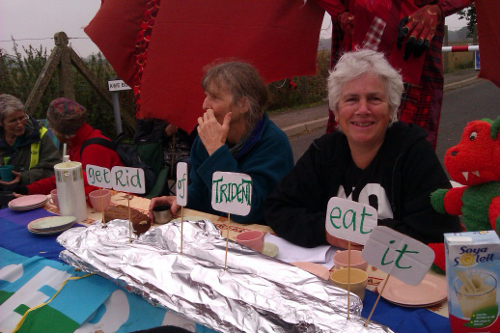 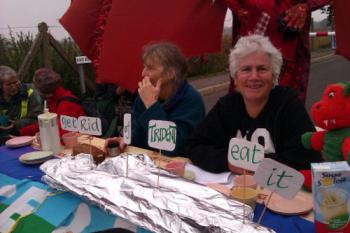 Early on 3 October, a small but committed contingent from Wales and Bristol, along with an intrepid lone Glaswegian, blockaded the ministry of defence (MoD) road to the Burghfield atomic weapons establishment (AWE).

A ‘Mad Trident Tea-Party’ was set up and attended by three large red dragons and numerous small ones. With members of Côr Cochion and Côr Gobaith present, the singing rarely stopped for the six hours of the blockade. We realised again the power of singing to articulate our compassion and idealism.

The police, despite having a significant presence, did not interfere with the blockade. So participants took the opportunity to engage in discussion while enthusiastically adhering to the theme of ‘Get rid of Trident – eat it!’ (Trident was represented by a missile-shaped, very tasty cake).

The overwhelming feeling of the blockade was of the importance of ‘bearing witness’, and we received great support from passing motorists and ‘inconvenienced’ workers, some of whom joined us for tea and Trident cake.

A continued protest presence at Burghfield, the ongoing bridge-building exercises with the local community, police liaison, and a general information campaign all need to be part of peace as a process rather than an abstract end in itself.

Côr Cochion’s Ray Davies said: ‘For me, and all of us, it was a wonderful example of what the power of song and nonviolent direct action can achieve. Yes, the protest was one big enjoyable picnic, which even the police finally half-heartedly joined in. But our objective was serious: to disrupt the manufacture of nuclear weapons and to give a powerful message to all the warmongers and arms dealers, that we will never, ever give up the struggle to free our world from the evil threat of nuclear weapons.’

In the words of Dafydd Iwan’s song, sung in a circle blocking the MoD road, we demonstrated that ‘Yma o Hyd’ – we are still here. Join us.