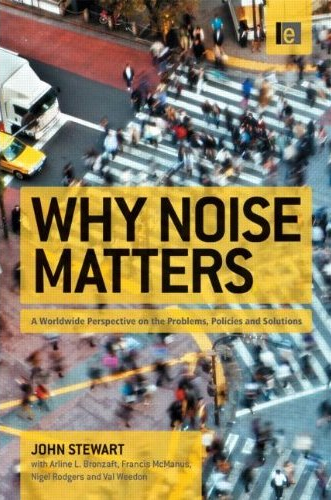 Noise is one of the most versatile of afflictions. Each of the three components of noise – pitch, volume and duration – might create only marginal discontent but together they form an unavoidable menace.
It might be said too that noise is highly subjective. Aircraft noise is one thing but there are people who are disturbed by church bells and ticking clocks. Often a vague humming noise is enough to drive many to distraction. Finally, there are people who cannot adjust to the silence of the countryside.

This well-researched book takes a unique perspective on considering noise in a global context, pointing out that increasing numbers of people (in Europe 65%) are exposed to noise levels considered by the World Health Organisation to be detrimental to health. Furthermore, a third of the planet's ecosystems have become aurally 'extinct'. Yet noise is the 'forgotten pollutant'.

John Stewart also points to worrying evidence of the role of noise in increasing aggression. This is not just at the neighbourhood level where inadequate sound proofing and powerful hi-fi can lead to serious conflict but also, more alarmingly, where loud music is used to destabilise people under interrogation.

One of the increasingly pervasive noises is piped music. On the face of it a relatively minor irritant, it is also – given that relatively few of us live under flight paths – one that inspires the widest discontent. In 'Pipedown', it has even inspired its own campaign group. On the other hand, it could be that society and especially its younger members can no longer tolerate silence. If so, all that can be done is to pursue technological and political solutions to the problem.

Stewart points to the connivance of politicians – particularly the Labour governments of 1997 to 2010 – with the consumer society and its negative externalities, noise being a prominent example. The Left, he argues, has taken its eye off the ball or even worse. Officials who might otherwise be gatekeepers against noise have themselves bought into, for revenue purposes, the late night economy, the so-called 'rights culture'.

The case made by Stewart and company is well argued and researched but it could be countered that a number of positive developments are on the horizon.

The concluding chapter offers evidence that it is quite feasible to reduce road traffic noise by up to 70% and rail by 50%. Wind farms can be better sited and local authorities are increasingly prepared to tackle neighbourhood disturbances by a blend of legal and behavioural sanctions.

However the real challenges will be to change travel habits, especially from aircraft, otherwise any wins through technology will be cancelled out by growth.