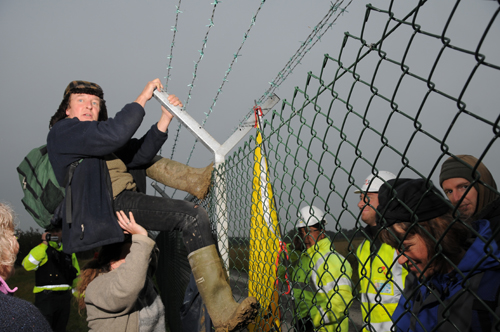 A variety of protests were seen during a weekend camp at the Hinkley nuclear power station.

Early on 8 October, 30 people entered the proposed construction site for a new nuclear reactor at Hinkley in Somerset. Inside they scattered 577 seed balls to mark the days since the Fukushima nuclear disaster in Japan.

Three people attached themselves to the fence with bicycle locks. After some hours the occupiers were forcibly removed. Just six were charged, some with going equipped to commit criminal damage.

The actions were part of a weekend anti-nuclear camp. There was a 100-strong anti-nuclear march in Bridgwater, the nearest town to Hinkley, on the Saturday, to alert the community to the dangers of a new power station. Yellow barrels labelled 'nuclear waste' were trundled along, representing the high-level waste from the new reactor which planners intend to store at Hinkley for over 100 years.

The march culminated in a rally in the busy town centre. Speakers included a scientist who had worked at the power station and someone who'd been living near Fukushima when it exploded. People then travelled to Hinkley to take part in a symbolic die-in outside the site. On the Sunday, workshops were held at the camp in preparation for Monday's occupation.