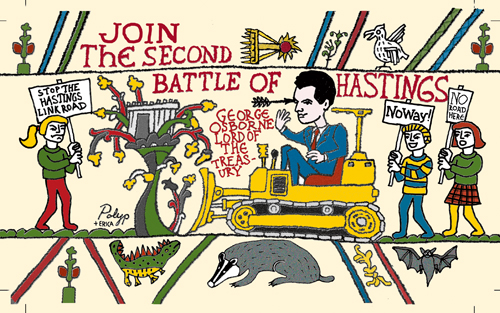 One of Britain's most effective environmentalists explains how the government's roads programme could be stopped in its tracks at the very beginning.

Road building is back on the national agenda. Courtesy of the chancellor, George Osborne. It had been assumed that major new roads were a thing of the past, killed off by the 'anti-roads' protests of the 1990s. But, in an attempt to pull the country out of recession, the treasury has been looking to invest in infrastructure projects, including new roads.

The first major scheme to come on-stream could be the £100 million, 5.6 km Bexhill to Hastings Link Road. It would cut straight through the astonishingly tranquil Combe Haven Valley, a site of special scientific interest. A practice protest camp and strategy session was set up by the Combe Haven Defenders (see p6).

It is all so very reminiscent of the 1990s when local communities and direct action protesters took on the Thatcher government’s £23 billion 1989 'Roads for Prosperity' programme. Despite high-profile defeats at places like Twyford Down and Newbury, the campaigners defeated the road plans.

Of the 600 roads proposed in 1989 only 150 remained by the time Labour came to power in 1997. Most had been dropped or put in abeyance. Moreover, it seemed that governments had conceded that road building should be the option of last resort.

Enter George Osborne. The situation is rather different to the 1990s in that many of the powers to authorise roads have been devolved to local authorities or regional bodies. But a lot of the 200-odd schemes in the pipeline will only go ahead with an injection of cash from national government.

Ironically, the push for the roads has come from the treasury, not from the department for transport which understands that new roads usually end up just generating more traffic and rarely in themselves lead to economic regeneration.

The Bexhill to Hastings road is a case in point. It has two stated purposes: to take through traffic out of the two towns; and to regenerate the area.

But 95% of the traffic is local traffic – much better dealt with by investing in public transport, walking and cycling – and any new business developments could be served by small link roads.

It is the 11th hour for the campaigners against the road. Work could start early next year. However there are precedents for roads being stopped at one minute to midnight.

The most famous example was the six-lane highway that would have ploughed through Oxleas Wood in south-east London. In the mid-1990s public pressure forced the government to cancel it after the local campaigners had lost two public inquiries over a 10-year period.

Combe Haven Valley is increasingly seen by campaigners across the country as the big opportunity to stop a new generation of road schemes in their tracks; to halt 'Osborne's folly'.

Scores of highly destructive roads – such as the Hereford Bypass or the widening of the A303 as it passes Stonehenge – are in the pipeline. Bad for the local environment; bad for climate change.

The roads protesters of the 1990s were successful by banding together and taking the fight to their opponents, supporting each other's battles, not just through direct action but by using innovative stunts and creative demonstrations. They changed the face of transport policy in the UK.

It can be done again. Osborne can be stopped. Combe Haven Valley is the place to start.

John Stewart is chair of the Campaign Against Climate Change, and was a leading activist in the successful campaign to prevent the expansion of Third Runway at Heathrow.

The Campaign for Better Transport is holding a national conference for local roads campaigners in Birmingham on 3 November.

The local group in Hastings is Combe Haven Defenders.