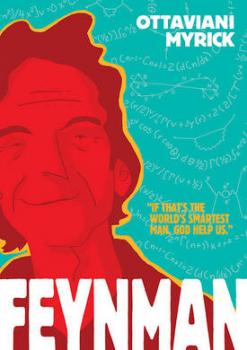 Bongo-player, brilliant raconteur and Nobel Prize-winning physicist, Richard Feynman was also one of the scientists who helped to build the first atomic bombs at Los Alamos.

After the first successful test Feynman was elated, playing an improvised drum on the hood of a jeep, but later sank into a deep depression, convinced that global nuclear war was inevitable. To his credit he later came to regret at least part of his role, and decided never to work on classified projects again.

If you haven’t already read Feynman’s marvellous QED: The Strange Theory of Light and Matter – one of the greatest works of popular science ever written – or his equally wonderful book of tall tales, Surely you’re joking, Mr Feynman, then I strongly recommend you do so at the earliest opportunity.

However, this fabulous – and not infrequently moving – graphic biography provides the perfect introduction. Incorporating not just Feynman’s best-known stories, but also unpublished material from Caltech’s archives, this is clearly a labour of love that allows Feynman’s humanity – and not a little of his physics – to shine through.