Andrew Feinstein, The Shadow World: Inside the Global Arms Trade 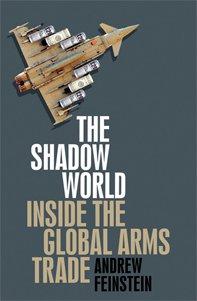 Andrew Feinstein’s The Shadow World: Inside the Global Arms Trade has been a long time coming. Anyone with more than a casual acquaintance with the arms industry will be well aware of its arsenal of libel lawyers, and the alacrity with which they descend upon all but the most cast iron of assertions against it. In this day and age it takes a brave publisher to put out such a book as Feinstein’s latest tome, and it is little surprise that there has not been a work of such scope and penetration since Anthony Sampson’s groundbreaking The Arms Bazaar, published in 1977.

The book’s researchers Paul Holden and Barnaby Pace are deservedly given the accolade of having their names printed prominently on the inside title page. One senses their contribution to the fruition of the book cannot be overstated, and indeed the fastidious attention to detail surrounding the ream of dates, figures and names results in a “notes and references” section that is over 100 pages long.

The Shadow World is a work of delicacy and often horrific insight. For a book that paints such a depressing picture of the breadth and depth of corruption in the arms trade – accounting for 40 percent of all corruption in global trade – it would be wrong to call it an “enjoyable” read. It is certainly “captivating”, however.

The reader is introduced to a number of key arms deals – such as the infamous “Al Yamamah” in Saudi Arabia – over the course of the book. These accounts are often populated by familiar names, particularly when there are government ministers involved. However it is the stories of characters less familiar that give The Shadow World its real edge over shorter, more polemical reportage. Feinstein’s book is something of a narrative web, the life-stories of its dramatis personae overlapping and giving a human face to the corruption he exposes. The lid is lifted on a world of backstabbing, ego and cavalier disregard for human life.
The Shadow World comes with a raft of high profile endorsements, and given the quality of the writing and the level of detail it is easy to see why. For peace activists around the world this is sure to become a cornerstone text, even if only for its statistics, rather than Feinstein’s somewhat gloomy prognosis. Highly recommended.