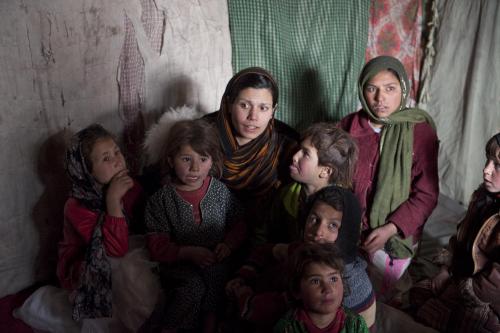 The sun was setting as my plane approached to land in Kabul. My first sights of Afghanistan were the snow-capped hills and gigantic mountain ranges which seemed to stretch forever.

As I got off the airport bus, I immediately headed for a queue with some other women in it. My pious Islamic outfit purchased from Whitechapel market only a week beforehand was probably too authentic as all the Afghani women wore western jeans and tops with scarves loosely tied round their heads. (It’s likely they were from middle class backgrounds.)

[After a worrying start, Maya was found by her hosts.]

There were enthusiastic “salaams” all round as I met four members of the Afghan Youth Peace Volunteers (AYPV): Momajan, Ali, Abduli and Roz Mohammed. I later found out their ethnic groups include Tajaki, Hazara and Pashtun. Due to the ethnic divisions in Afghanistan such a gathering of friends is unusual. I was to quickly discover that this is just one of the many unique aspects of the AYPV.

In the morning we were visited by one of the female members of the Afghan Youth Peace Volunteers, Lena, a young, intelligent, outspoken Afghan woman who has just qualified as a teacher and has already taught in various schools inside Kabul.

Lena was very much anti-NATO intervention and felt that foreign involvement in Afghanistan was only bringing further violence and unrest. She also emphasised the importance of free state education for all, explaining that she could earn a very good wage working for private schools, but she preferred to work in government schools, educating the people of Afghanistan. She felt that providing she had food for lunch and dinner that was good enough for her.

We were then visited by Feda Mohammed, a former official in the ministry of education and now an education consultant. Over lunch, Feda, a slim, tall, middle-aged family man, dressed in a neat suit and tie, put across the opposing view to Lena. He was very much in favour of NATO and foreign intervention, his analysis was very black-and-white: Afghanistan could have either foreign occupation or the Taliban (a horrible prospect to most in Afghanistan, especially those who had experienced their previous reign). He viewed the killing of civilians by NATO as “collateral damage”, a necessary part of eradicating the Taliban, even if those deaths included his three sons.

There was a stony silence in the room.

AYPV Abduli, a 16-year-old Hazara boy from Bamiyan, whose father had been killed by the Taliban, was asked for his opinion. One of the most moving moments of my life then took place.

Abduli was silent for a while and then he quietly said: “If a Talib was in this room now, I know there is only one way forward to resolve the situation… forgiveness”.

I looked down and wept quietly. I wept for his pain and I wept for his strength and wisdom. I was astounded that such a young person, who had experienced one of the worst things a child could endure, had chosen the hardest path to walk. Without a doubt that moment will stay with me forever and whenever I weaken in my conviction to walk the path of nonviolence and forgiveness I will think of Abduli.

As we approached a cluster of ramshackle mud huts on the side of a motorway, our driver (a friend of a friend) warned us to be careful as two foreign journalists had been kidnapped in a refugee camp in Kabul only last year.

The refugee camp, near the Crystal Hotel in Karte Parwan, Kabul, is home to around 300 families, each consisting on average of nine people. The camp is separated from the motorway by a large ditch which, judging from the strong smell of sulphur, contained raw sewage. As we arrived, we saw the last sack of aid from the Peace News Kabul Winter Appeal being carried away (see opposite page).
Apparently the camp rarely receives visitors, let alone foreigners. That, coupled with the fact that a load of food had just come, had created a euphoric mood especially among the children.

In hindsight the aid was perfectly timed as when I woke the next morning Kabul was covered with snow. I immediately thought about the people I’d met at the camp, the children without shoes walking over heaps of rubbish (which included used needles), the mud hut with little or no means of cooking, let alone heating. My heart was with them and the 350,000 internally displaced Afghans who didn’t receive help before the snow came.

Only two weeks ago, the chief of the UNHCR (the United Nations refugee agency), Peter Nicolaus, stated that policy towards refugees over the last 10 years has been the “biggest mistake UNHCR ever made”, largely because they encouraged the return of externally-displaced Afghan refugees. (UNHCR estimates that Afghanistan has the greatest number of refugees in the world, around 3 million.) Those who have returned are now mostly jobless, homeless and living in some of the poorest conditions currently experienced globally.

In the camp, I spoke with a widow, Medina, who pleaded with me to tell the people of Britain of their extreme poverty: no food, no blankets and no means to cook. As a widow, she is in an impossible position. It’s still a novelty for women in Afghanistan to work; it’s become acceptable among the professional middle classes but for the lower class sectors of society there’s still a long way to go.

Maya Evans went to Afghanistan on behalf of Justice Not Vengeance. She travelled with Kathy Kelly, Ken Hannaford-Ricardi and Farah Mokhtareizadeh of Voices for Creative Nonviolence (US).