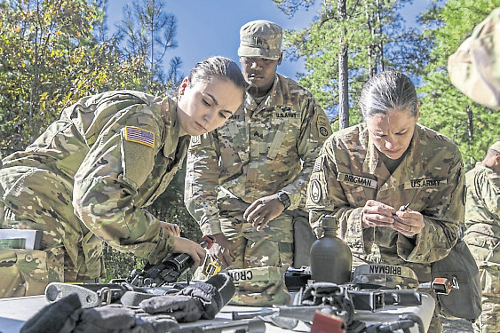 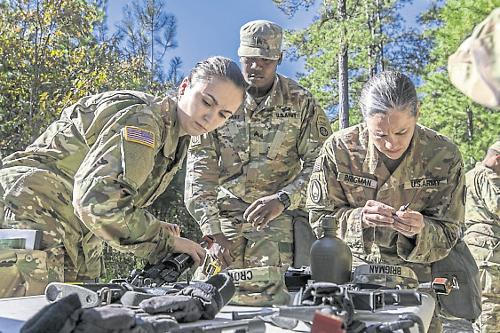 US soldiers being tested for the expert field medical badge disassemble and reassemble an M4 rifle as quickly as possible at Fort Bragg, North Carolina, USA, on 30 October 2018. Photo: Spc Liem Huynh (CC BY 2.0)

In a recent Reith Lecture, historian Margaret MacMillan and her audience struggled to get to grips with the concept of ‘the warrior’, a well-worn archetype, but one that fits uneasily into today’s society. This is hardly surprising as we live in an age in which the concept of war itself has become increasingly shapeless.

Educated in the belief that warfare is an extraordinary activity with a beginning and an end, bookending a clear set of goals, how do we now process the endlessly-expanding ‘war on terror’, or the futility of the ‘war on drugs’?

How do we make sense of cyber wars, proxy wars and the relentless assault on countries that can barely scrape enough food together to feed their populations, let alone support a military with which to defend themselves?

War is not what it used to be, and neither is the warrior. Even my own military experience in the 1960s and ’70s now looks like ancient history.

Recently, on one of the many online US journals dedicated to ‘defense’, I saw a photo of a group of proud US airforce officers being awarded medals of commendation for meritorious service. Their task? Guiding Reaper drones to successful strikes over ‘undisclosed areas of operations’ from their base in the US, thousands of miles away from the consequences of their actions.

To paraphrase one member of MacMillan’s audience, the term ‘warrior’ hardly seems applicable to describe what they do, yet to satisfy our desperate need for ‘heroes’ we ascribe to them the same qualities and offer the same rewards.

In many ancient traditions, the warrior was not an automaton controlled by a distant button-pusher but an individual who followed a sacred path. The true warrior conquers the world not through violence or aggression, but through patience, compassion, and self-knowledge, qualities (perhaps tritely) more often associated with the feminine aspect than the male.

As MacMillan rightly says, women warriors appear in every era throughout history, and an optimist might see the increased use of women at the sharp end of the military as a step towards a less one-dimensional mentality. It remains to be seen.

Whatever form he or she takes, the warrior is nothing without an enemy, and an enemy, once identified, has to be fought.

Traditionally, warriors embraced battle not only to give their lives meaning, but also in order to protect others – the family, the clan, the nation. Here, the warrior is considered an essential part of society, a protector and a source for good.

This is what author Lawrence LeShan calls the ‘mythic reality’ of war, imbued with meanings we may have devalued but which are still evoked in a corrupted and cynical fashion by those who see war as an opportunity for advancement.

With this in mind, the thought arises that it’s easier to describe what a warrior is not.

Soldiers who kick in the door of a house at 4am and drag a civilian off to the nearest torture centre are not warriors. They are nothing more than the final links in the chain of command, and the collar is around their necks. One yank from their masters and the whole nasty business can stop – or endlessly repeat itself. This is the invocation and control of violence as a tool that is at the absolute heart of military life.

Amazingly, with all the knowledge of history at their disposal, those who perversely believe that waging war can somehow bring about peace have little or no idea of what they unleash when they create the conditions for division and violence.

They may, as MacMillan states, have many complex motives and justifications for engaging in hostilities with the ‘other,’ but complexity itself is the first casualty of combat.

Nothing is less complex than the primeval urge for self-preservation during violent conflict. The absence of complexity awakens us totally into the present moment, away from the reminiscences and future projections in which we otherwise spend our waking hours.

The experience of being thrust into the ‘Now’ is fundamentally exhilarating, even addictive. In this state of heightened sensibility, we are dealing with the basics of our existence. And, truly, we never feel as alive as when we are in the intimate presence of death.

As a young soldier, I experienced the powerful effects that both random and organised violence can have on individuals and societies. There is an intoxicating sense of liberation when our flimsy social structures fall away and life becomes a matter of striking first and hardest. All questions are answered in such moments.

Caught up in that delirium, consequences are for others to worry about, a dangerous illusion so insidious that otherwise sane and grounded people can quickly be swept away by it. It’s here that the warrior confronts his or her true enemy.

There is only one enemy, according to Hindu philosophy, but that enemy expresses himself or herself in ways we may easily mistake for the actions of an ally.

It could be a vested interest that works to keep us at a level of consciousness that facilitates hatred and violence as a means of dealing with our fears and uncertainties. It may be a government policy that attempts to bring about peace by the use of more and more weaponry, a lunatic philosophy worthy of the cancer cell.

Or could it be that something in our deep collective subconscious manufactures, in some deviant fashion, enemies, conflicts, and wars in order for us to experience life fully? Is this what we have to do in order to give our lives meaning? The path of the warrior has something to teach us in this desensitised world, but we must look further than our own carefully contrived and sanitised version of history to find the lessons. If you understand and accept that, it’s time to awaken and evolve.

Steve Metcalfe is a member of Veterans for Peace UK.

‘Fearing and Loving’, the second Reith Lecture of 2018, was recorded at the University of York on 7 June and broadcast on 3 July 2018. A transcript and audio are available at: www.tinyurl.com/peacenews3195