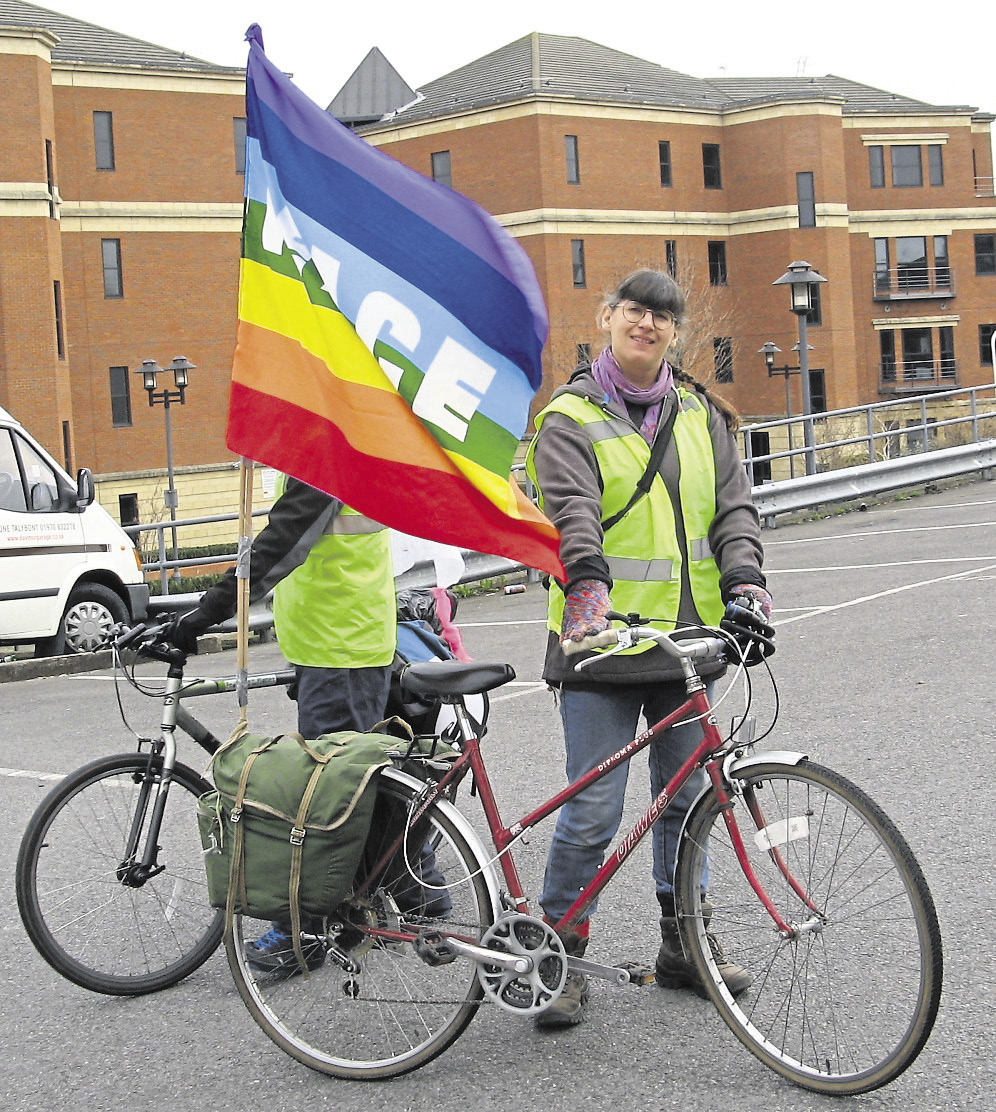 A familiar sight: Genny on her campaign bike. ‘Cyclists say no to war’ cycled from Reading to Aldermaston to join CND’s surround-the-base blockade, ‘The Bomb Stops Here’, on 24 March 2008 to mark the 50th anniversary of the first march to Aldermaston. Pho

Genny Bove was born in London. Her father was of Italian heritage, her mother from Hull. She was 16 when she met Alan, forming a relationship that was to be an enduring one of 40 years. They moved to Wrexham where their daughter Libby was born in 1991. Libby shared with me her memories of being home-educated by Genny and of a fabulous travelling trip through Europe.

It is apt to let Jill Gough of CND Cymru sum up Genny’s enormous contribution to peace and justice:

‘Genny has been one of the greatest and most passionate peace and justice campaigners I have worked alongside. Whether in her art, making her magnificent banners, fighting for workers’ disability rights, cycling across Wales to draw attention to a campaign, or writing beautifully-crafted pieces for me in Heddwch and in Peace News’.

One of Genny’s amazing achievements in recent years was to support Chelsea Manning’s family members in Wales and Ireland.

One afternoon, a couple of years ago, Genny and I were walking through Loggerhead woods. By this time, Genny was aware of her cancer diagnosis and dealing with it in her in her own indomitable manner. I recall asking her how she had established such a positive relationship with Chelsea Manning’s family in Wales. She explained how she did it, as if it was the most normal thing in the world. She had just taken her bike, a banner and leaflets and set up in the middle of Haverfordwest. Genny started sharing her leaflets, going back home to Wrexham and returning again a few weeks later. Eventually a member of Chelsea’s family approached her to ‘suss her out’ and the campaign began.

Wales, indeed the UK, have lost a passionate peace and justice campaigner at a time when we need people like her more than ever.

I feel that I have lost an essential fulcrum in my life. Not only because of the loss of shared experiences of peace campaigning but because of what we shared in our own personal lives. The acute loneliness of being a whistleblower. The exhaustion of representing ourselves in horrendous employment tribunals. The joy and despair of caring for elderly parents and battling broken systems for adequate care.

Genny totally understood the truth about our corrupt, broken society but she carried on exposing it with fantastic good humour and grace. More than anything, I miss her wonderful ability to laugh out loud at the absurdity of it all.

Of all she leaves behind, I believe the greatest tribute to Genny is the principled manner in which her daughter Libby is living her life. The way Genny managed her illness with positivity and grace was a tremendous gift she gave to Alan and Libby, her family and friends.

May you rest in peace, Genny, as you campaigned for it so bravely in your life.

A familiar sight: Genny on her campaign bike. ‘Cyclists say no to war’ cycled from Reading to Aldermaston to join CND’s surround-the-base blockade, ‘The Bomb Stops Here’, on 24 March 2008 to mark the 50th anniversary of the first march to Aldermaston. Pho

There will be a celebration of Genny’s life at Llanfillin workhouse on 30 March. More info: celebrationforgenny [at] gmail.com