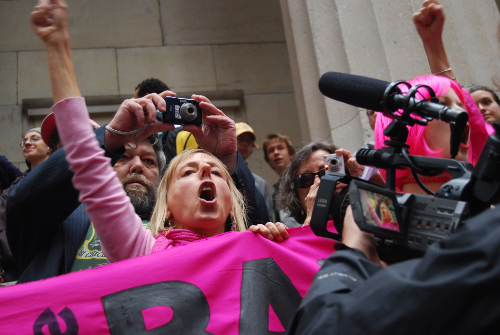 An interview with the co-founder of the women-led US peace group CODEPINK. 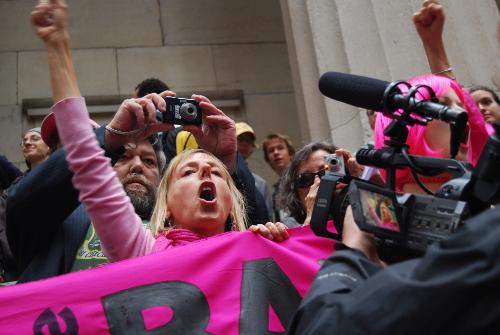 Having become one of the most prominent US anti-war activists protesting against the US-led ‘war on terror’, Medea Benjamin, co-founder of the group CODEPINK, has now turned her attention to her nation’s close relationship with Saudi Arabia.

‘I’ve been doing a lot of work around the Middle East conflicts since the 9/11 attacks’, Benjamin, 64, tells me when we met in London during her recent speaking tour of Europe. ‘I realised as the years went by that there was this elephant in the room and it was kind of crazy that the anti-war movement, at least in the United States, was not doing anything on Saudi Arabia’, she says. ‘I just thought how ironic it is that the US is spending at this point trillions of dollars fighting a “war on terrorism”, and yet is arming the country that is the most responsible for the spread of terrorism.’

'Look at the places that receive Saudi money, like universities, and ask them to renounce it

The outcome is Benjamin’s new book Kingdom of The Unjust: Behind the US-Saudi Connection, which charts the history of US ties to the absolute monarchy. A key moment was the 1945 meeting between US president Franklin D Roosevelt and Saudi king Abdul Aziz ibn Saud to agree US access to the kingdom’s vast oil supplies in return for military support. Since then, ‘one by one, US presidents promised to keep Saudi Islamist theocracy in power’, Benjamin notes in the book.

‘Oil is the foundation of the relationship, but it’s become much more complicated today’, she says, highlighting the ‘mindboggling’ $110bn of US arms sales to Saudi Arabia during the Obama administration. In addition, she notes, the Saudis ‘have invested in the US economy buying hundreds of billions of dollars’ worth of US treasury bonds, and investing in Wall Street, investing in real estate’ and have ‘bought silence or complicity by giving millions of dollars to US universities and think-tanks and paid lobbyists’.

‘There is so much intertwining of this relationship that to start peeling away the layers is very important to do’, she believes.

Fearful of growing Iranian influence following the 1979 Iranian Revolution, and buoyed by high oil prices, Saudi Arabia has spent huge sums of money exporting Wahhabism, their extremist version of Islam, across the Middle East. Madrassas (religious schools) and mosques were built and imams and teachers brought to the kingdom to be indoctrinated. ‘It has become such a potent mix and has corrupted the minds of a lot of young people who live in poor countries, who don’t have job opportunities, who are looking for some kind of outlet, something to believe in.’

As part of this mission, the Saudis – collaborating with the US central intelligence agency (CIA) – funnelled weapons to the armed resistance to the Soviet occupation of Afghanistan, strengthening the most extreme jihadis, out of which came the Taliban and al-Qa’eda.

Benjamin personally experienced the consequences of this policy after the October 2001 US-led invasion of Afghanistan. ‘I was at the border between Afghanistan and Pakistan and I was told there was a rally against the Western invasion of Afghanistan’, she notes. ‘We were two Western women and when we got there we were attacked by the guys there and we had to get out for our lives because they were after us. I had never been in such a situation. I had always been able to talk to people and say: “Hey, I’m an anti-war activist in the US, I don’t like the invasion either.” And people said: “No, you can’t do that here because these are the Saudi-funded madrassas and they are really taught to hate people from the West.”’

The CIA’s role in arming the jihadis in Afghanistan in the 1980s was a covert operation – a cornerstone of the US-Saudi relationship, Benjamin says. ‘When the CIA has wanted to do illegal activities around the world and doesn’t want to go to the US congress, because they want these to be unseen and unheard by the American people, they go to the Saudis to get the funding.’

According to a January 2016 New York Times article, the CIA and Saudi Arabia continue to work closely together, arming the insurgency in Syria since 2013. ‘The US is selling all these weapons to Saudi Arabia; where do these weapons end up?’, she asks. ‘They are being channelled into groups that the Saudis are supporting in Syria, including the al-Qa’eda affiliate in Syria’.

Turning to Saudi Arabia’s military intervention in Yemen, Benjamin quotes the Yemen Data Project, noting that one-third of Saudi airstrikes have struck civilian sites, including hospitals, schools, markets and weddings. ‘They are getting munitions from the West, they are getting the logistical support. The US is even refuelling their planes in the air’, she explains. With the Saudis unable to continue their air campaign without US and UK support, Benjamin believes the peace movements in the US and UK have a great opportunity to exert pressure on the kingdom. How? ‘The number one thing is weapons. Look and see who is providing the weapons, what weapons are they providing, starting to do protests at the headquarters and the production facilities. We are even looking to see where the shipments are going out of and seeing if we could block the shipments.’

“It has become such a potent mix and has corrupted the minds of a lot of young people who live in poor countries, who are looking for some kind of outlet, something to believe in.”

She also suggests ‘shaming the political figures who are supporting the weapons sales… doing a divestment campaign to get universities and pension funds to take their money out of the weapons industries that are profiting from Saudi sales’ and ‘looking at the places that received Saudi money, like universities, and asking them to renounce taking Saudi money.’

During our interview in September, Benjamin mistakenly predicted a Hillary Clinton victory in the US presidential election. However, though she says Donald Trump in the White House would be ‘a wild card’, she expects ‘there will be a continuity of the present relationship’ between the US and Saudi Arabia. ‘There is a certain momentum that the military-industrial complex keeps in motion no matter who is in the White House… it’s bigger than one individual.’ She is also hopeful there will ‘be much more of a possibility of building up an anti-war movement like we had under the Bush years’. Presuming a president Clinton, she argued that nobody had any illusions about her ‘being a peace candidate or a peace president, so I don’t think it is going to be so hard to get people to protest her policies.’ This, of course, applies even more so to Trump.