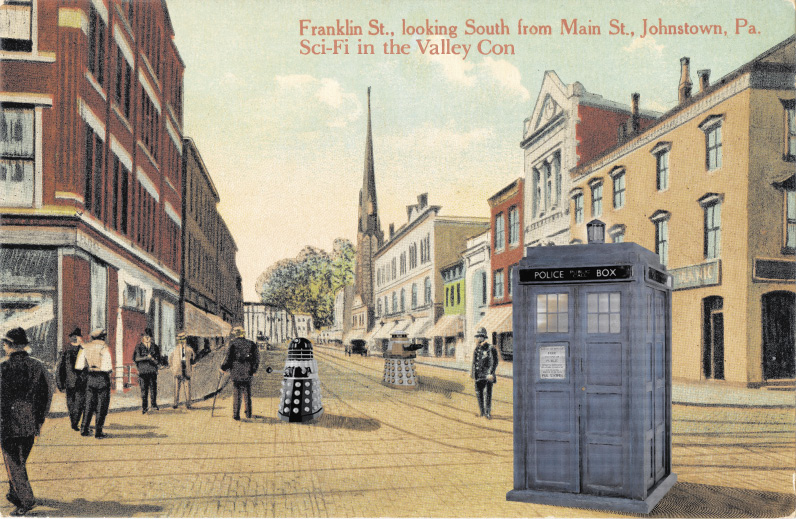 Family television wrestles with the concept of redemptive violence 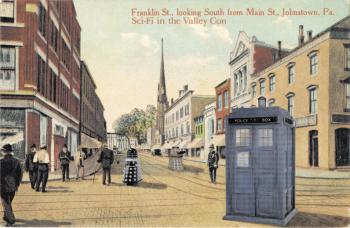 As the longest running sci-fi show in the world, the 50th anniversary episode of Doctor Who was always going to be a big event. It could have easily fallen flat on its face, but luckily ‘The Day of the Doctor’ did not disappoint. Steven Moffat’s excellent story was brilliantly acted, had real heart and the right balance of comedy and seriousness, nods to the past and a marvellous set-up for the future. It also served up an unexpected treat, providing a resolution as close to being nonviolent as we are likely to get on mainstream TV.

The episode had been set up at the end of the previous series by the introduction of a hitherto unknown Doctor (John Hurt), one the 11th Doctor (Matt Smith) seemed keen to forget. An online minisode added further detail, as it dealt with the regeneration of the 8th Doctor (Paul McGann). This was both a nod to fans (McGann’s popular Doctor appeared in one film in 1996, and his fate had not been revealed before) and an important back story for Hurt’s Doctor. Modern Who has been based on the premise that the Doctor is the sole survivor of his race, the Time Lords, who fought and lost their Time War with the Daleks. The Doctor was the only one in a position to end the war, and did so by killing everyone, Daleks and Time Lords alike — an act of redemptive violence that has haunted him ever since. Here we are given an indication of what leads him to that point.

The 8th Doctor hates the Time War and has done his best to avoid involvement, helping whatever victims he can. But when a crashing pilot chooses to die rather than be saved by him, because his race is now as bad as the Daleks, he realises he must take part. Putting aside the name of ‘Doctor’, he chooses to become a warrior, regenerating into ‘the War Doctor’, no longer the man he once was. It is this decision, and its consequences that ‘The Day of the Doctor’ explores, asking the age-old question: is violence justified if it prevents a worse atrocity?

The story takes place in three time zones: our present, the Elizabethan era, and the day the Doctor committed genocide on Gallifrey. Here the War Doctor steals the Moment, a weapon so powerful, it has never been used — not only because of what it will do, but because it has evolved a conscience. ‘And who,’ asks one of the Time Lords, ‘would dare use something that would sit in judgement on you?’ The War Doctor, of course, but when he meets the machine’s interface (beautifully played by Billie Piper), it will not let him act until he fully understands the repercussions of his actions. ‘I don’t want to survive this,’ he says. ‘Well then,’ she replies: ‘That will be your punishment’, before introducing him to the 10th and 11th Doctors (David Tennant and Matt Smith).

At first they recoil at the sight of the man they wish they’d never been, while he is appalled at their apparent youthful silliness. Soon, they are forced to collaborate to prevent the shape-changing Zygons storing themselves in paintings in Elizabethan times to invade the future. As the Doctors work together, the War Doctor comes to understand how his actions will impact on his successors. The 10th Doctor counts the millions of children he killed in one ‘terrible night’. Something the 11th Doctor cannot bear to remember, much to the fury of his predecessor.

When the War Doctor sees them using that experience to beg their human friend not to push the nuclear button to avoid a Zygon victory, and then forcing both sides to negotiate, he decides his actions have been worth it. He returns to Gallifrey to finish the job. However, the 11th Doctor’s companion, Clara (Jenna Coleman) realises that he is yet to commit genocide, and persuades the others to follow him. The 10th and 11th Doctors join him, ready to act by his side.

This is an impossible choice, they agree, on the day no-one could get it right. It seems the whole story has been building to the point where they will regretfully support and be part of the action that has haunted them for so many years. As an audience, we are invited to agree for a moment that there is no other choice: redemptive violence wins.

And then Clara cries, appalled that her Doctor is taking part; as the Moment mournfully reminds them, of course they will kill all the Daleks, but they’ll kill all those children too. ‘Anyone can be a hero or a warrior,’ says Clara: ‘Be a doctor’. It is enough to stop the 11th Doctor, who decides that together they can change their future. Having lived with this for 400 years, he can’t bear to do it again, and he’s had time to come up with a solution.

It’s not quite nonviolent, but it’s close. Using the collective power of their Tardises and those of their past selves, they generate enough energy to remove Gallifrey from the universe and protect it in a pocket universe frozen in time. As a result, the Daleks are left firing at each other, destroying themselves (the JK Rowling resolution — evil dying by its own hand). It ends the war, and, although the Doctor will forget he didn’t kill his people, it allows him to be himself again.

At the beginning of the episode, Clara quotes Marcus Aurelius: ‘Waste no more time arguing about what a good man should be. Be one.’ In this exploration of the Doctor’s motivations and actions on the most important day of his life, Steven Moffat gave us an excellent account of what makes a good man.

As with the best Who adventures, it was a wild, exciting, moving and funny; I loved every minute. But for me, the fact Dr Who chose this special occasion to challenge its own myth of redemptive violence, is the biggest reason to celebrate of all.

Virginia Moffat is a regular PN contributor; her blog is ‘A Room of My Own’.