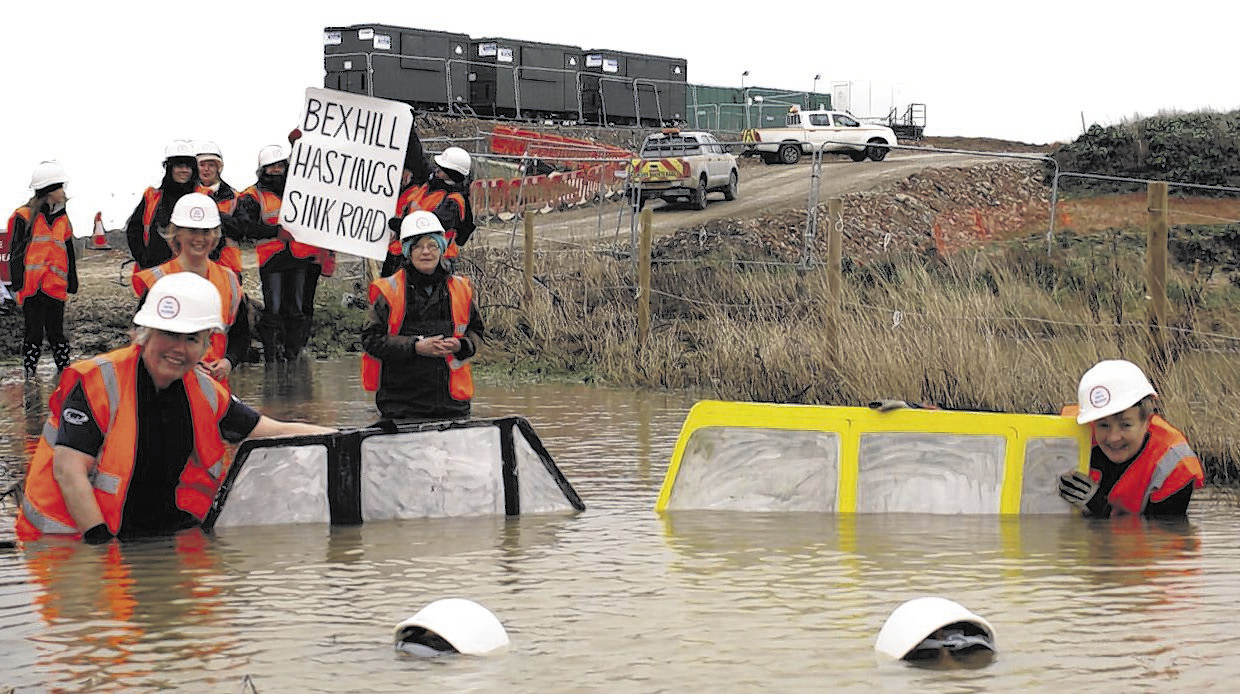 Grannies Are In Action (GAIA) set up a ‘car wash’ in the
floodwaters of Combe Haven, East Sussex, on 12 January.
Photo: Marta Lefler

Over half the charges against Combe Haven Defenders (CHD) anti-roads protesters have been dropped or abandoned, or have resulted in not guilty verdicts, in the four trials so far concluded. At the time of going to press two trials were still underway, continuing into early February.

CHD, an East Sussex anti-roads group, have had over a year of nonviolent direct action against the Bexhill Hastings Link Road, with 19 activists in six different trials. Their activism is a part of a larger picture. ‘It is a local way to tackle national issues of climate change and sustainable transport,’ defendant, and Peace News co-editor, Emily Johns said.

The Bexhill Hastings Link Road is the first of 190 planned roads to be built across England and Wales in the coming years. A total of £113 million has been committed to the Bexhill-Hastings project, according to the Campaign for Better Transport, and construction leads the road through a valley of ‘exceptional tranquillity’ according to East Sussex County Council.

Anti-roads activist Andrea Needham said the road will cut through the countryside between Bexhill and Hastings, to allow the county council access to build housing and industrial buildings.

‘To me what felt quite significant is that, in the ’90s, the government scrapped the national road-building scheme and they seemed to have resuscitated that scheme now,’ Val Archer, one of the defendants said. ‘It looks like there are going to be more roads. I hope that there will be resistance in the communities.’

CHD member, and PN promos worker, Gabriel Carlyle added that ’90s activists used similar tactics to those being employed now: from making demands for transparency to occupying trees to be felled for construction.

Almost all the arrests took place near the construction sites for the road, many in camps set up for direct action. Johns was arrested in London at the department for transport.

The trials were all supposed to have finished by October 2013. However, Carlyle said two will still be ongoing in early February 2014.

Archer has been frustrated by this slowness. ‘I never expected when I took part that a year later I would still be entangled in the legal proceedings,’ she said. Needham commented that the crown prosecution may be wishing they never started in with the trials.

‘In terms of the prosecutor and the judge, my guess is that they can’t be being paid less than £150 an hour, and it is quite likely that it is more like £200 or £250 an hour,’ Carlyle said. ‘So the way this has been dragged out, there have been tens of thousands of pounds that have been deployed on the prosecution side.’

These funds have not wrought many victories for the prosecution.

The first CHD trial was Rosamond Palmer’s. Palmer was arrested at the beginning of the direct action campaign, in December 2012, for sitting at the base of a tree with her arms wrapped around it.

Palmer defended herself. She was denied legal aid because the judge said it was not a serious enough offence. Carlyle said she had an involved legal defence, regardless.

‘She was given a slap on the wrist in the end,’ Carlyle said. Palmer was found guilty of aggravated trespass with a nine-month conditional discharge.

‘This means that no penalty was incurred unless she is found guilty of another offence in that nine-month period. No costs were awarded against her,’ Carlyle said. ‘So basically they spent a fortune prosecuting her and while she was found guilty she basically walks.’

The second CHD trial also involved a single individual. Dominick Longford scaled a telegraph pole next to felled trees. He was charged with obstruction of the highway and resisting arrest.

‘He was up this pole for many, many hours and when he finally jumped down in the dark, he was jumped on by a police officer, who said Dominick had been trying to run away,’ Carlyle said. An officer used incapacitating, or pepper, spray on Dominick but later acknowledged in court that she had breached police guidelines in doing so.

Dominick was found guilty, Carlyle said, but given a two-year conditional discharge.

The third trial grouped four defendants together who had been arrested around the same time and place, in the hopes of saving the court time and costs, Needham said.

The first defendant, Chris Bluemel, ‘climbed up the arm of a mechanical digger involved in the construction works,’ Carlyle said. He was found guilty of aggravated trespass and ordered to pay £500 costs.

The next two defendants had climbed about 50 feet into a tree. They were charged with aggravated trespass but also assault for allegedly touching the equipment of the professional climber who came up to collect them.

‘The allegation was one of them had touched the climbing gear of the professional climber who was going up there to handcuff them and bring them down,’ Carlyle said. ‘It wasn’t that he had hit him or interfered at all. It was that he had touched it and the climbing chap said this put him in fear of his life.’

The charges were dropped for one defendant, for lack of evidence, but the other was found guilty and ordered to pay £250 costs. Both defendants were found not guilty of aggravated trespass, since the tree they occupied was adjacent to the road and thus on public property, Carlyle said.

The fourth defendant was a young woman charged with aggravated trespass and assault.

‘She did not deny that she had bitten one of security bailiffs who had grabbed her, but she maintained that she had done this in self-defence,’ Carlyle said. In court, the bailiff’s evidence was deemed ‘unreliable’ by the judge and so she was found not guilty of both charges.

‘Trial four had a lot more people involved in it and still hasn’t actually finished,’ Carlyle said. The group of six defendants appeared in court on 28 January 2014 (after PN goes to press) for the verdict. Their case began in October 2013.

All six people were occupying structures in trees at the main protest camp, which was evicted over a two-day period. They were charged with aggravated trespass and also obstructing a high court enforcement officer. The second charge was dropped before the trial began.

‘There is a serious question mark about whether or not East Sussex County Council had followed the correct procedures in regards to the compulsory purchase of the land for the road,’ Carlyle said.

The warrant the county council has shown is undated and, if they do not produce correctly filled-in paperwork, the charges could be dropped for the six defendants.

The fifth trial is the same situation and could also collapse if no document is produced.

‘Two of [the six defendants] are now living in Spain, so there is this question mark over whether or they will return for this trial,’ Carlyle said. The group is waiting to see if the judge will simply drop the case, ‘given their case was supposed to be heard months and months and months ago. The whole thing is dragging.’

Emily Johns, unlike the other CHD defendants, was arrested in London during an action outside the department for transport (DfT).

Johns was standing in the entrance to the building and handing out leaflets, asking officials for an uncensored version of the DfT’s study examining the cost-effectiveness of the link road. Police officers issued her two warnings and eventually arrested her for aggravated trespass.

Under section 69 of the Criminal Justice and Public Order Act, the officer did not need to be correct in his assessment that she was engaged in aggravated trespass, but needed merely to ‘reasonably believe’ that he was correct, according to the court.

Johns pointed out that the police officers had testified that her conduct was ‘very joyful,’ as well as ‘calm and peaceful,’ arguing that this proved the officers understood at the time of arrest that her behaviour was not ‘obstructing,’ ‘disrupting’ or ‘intimidating’ any lawful activities, as the legislation specifies.

‘If his belief was not reasonable, then his order for me to leave was itself unlawful and I must be found not guilty of the offence,’ Johns said in her closing trial remarks. The judge found her guilty of disobeying the officer’s orders but gave her a conditional discharge of 18 months, and no court costs. She was ordered to pay £15 to Victims Support. The crown prosecution service (CPS) were ordered to pay £91 to Johns for defence costs incurred on the day the CPS did not show up.

The most significant difference between Johns’ trial and the other CHD trials was that she chose to use a political defence as well as a legal one, calling on higher moral reasoning for her actions.

‘I think that things like transparency and accountability only occur if the public is pushing for it,’ Johns said.

Before she was sentenced, Johns expressed this sentiment to the judge, saying: ‘It was the right thing to do. Calling the government to account is sometimes the higher law.’

Emily Masters is a US student journalist working in London with PN.