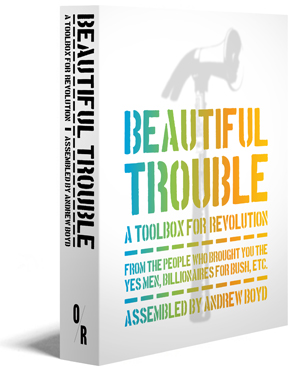 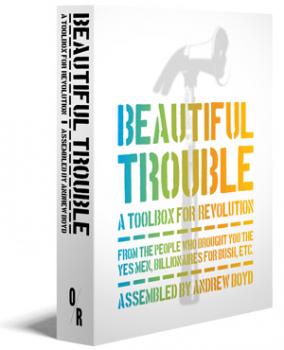 I knew this book was going to be worth reading when the introduction began by quoting this intercept from a police radio report: ‘The clowns are organising. They are organising. Over and out.’

Aimed at activists – particularly those jaded at the prospect of another boring protest, just like the last one, or disheartened at the prospect of handing out leaflets on a Saturday afternoon to busy shoppers – it suggests that we blend art and politics to make activism more ‘compelling and sustainable’, and provides a friendly non-ideological recipe book for nonviolent social activism.

Grouped into five themed sections (Tactics, Principles, Theories, Case Studies and Practitioners), each one divided into stylishly-formatted bite-size entries, it’s great for dipping into. Providing tools for people to adapt to their own circumstances, it also encourages you to create your own tactics etc... by leaving blank templates at the end of each section.

Readers of Christopher Alexander’s classic A Pattern Language may recognise similarities in structure between the two books, with their modular interlocking formats, and expandable structures. Moreover, the physical object is a pleasure to hold and leaf through, printed on 30% recycled paper (by a 100% wind-powered printer), it’s well laid-out, with black and white photographs throughout to illustrate the concepts described.

For me, the Principles section, devoted to the ‘hard-won insights that can guide or inform creative action design’ was the most useful part, containing such gems as ‘No one wants to watch a drum circle’. Principles such as ‘Challenge Patriarchy as you organise’ can often be ignored unless specifically identified, and having them concisely outlined like this may help groups identify the issues and find a way forward

There are some minor quibbles: the odd typo, and, as we all know, it was Obi Wan Kenobi, not Luke Skywalker, who used a Jedi mind trick to distract imperial stormtroopers in Mos Eisley (p194).

A more serious concern is the US focus of most of the material: of the 34 case studies I counted only nine that originated outside North America, and of those, eight are from Europe (the one exception is Gandhi’s salt march from the 1930s!).

Nonetheless, I would definitely advise PN readers to have a look, and would also recommend it as a good introduction to creative activism for young people. I would have loved it as a gift when I was a teenage rebel, and imagine that it would be a great resource in a school: useful for Art, Design, History, and Citizenship!