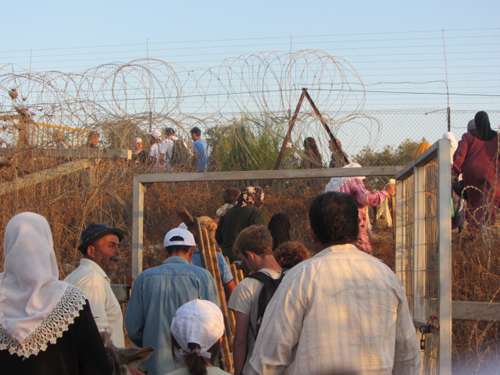 Gill Knight has been doing solidarity work in Palestine for a number of years.  This autumn she helped bring in the olive crop.

The olive harvest, it’s not as romantic as it sounds, emailed my Aussie friend and fellow IWPSer before I set off for my second ‘tour’ volunteering with the International Women’s Peace Service, based in the village of Deir Istiya in the Salfit governate, in the West Bank.

And in a way my friend was right: gruelling sun, long hours in the sun, and a bit monotonous sometimes. Returning, eating and showering were all we were fit for, but there were clothes to hand-wash (olive-picking is incredibly dusty work), then a house meeting to work out the schedule for the next day. Halting phone calls in a mixture of our basic Arabic and the callers’ basic English ensued and transport was arranged. On the upside, we spent great times with Palestinian families, drinking ‘chay’ (tea) and eating delicious lunches cooked on wood fires.

The olive harvest in the West Bank is co-ordinated by UN OCHA (office of the commissioner of humanitarian affairs) so that hot spots are identifed and can be supported by international accompaniers. Hot spots are where farmers are likely to meet with settler aggression or problems of access. We met in the OCHA offices in Ramallah with other internationals and worked out a programme. This and our feedback provides OCHA with statistics for their reports.

There is a second type of co-ordination which actually means that some farmers have to ask for permission from the Israeli DCO (the district co-ordination office) so they can farm their own land. Why? Because their land happens to be near one of the settlements that snake over the West Bank surrounded by security roads and fences. Settlements are illegal under international law but Palestinian-owned land is frequently behind these barriers.

It is totally up to the DCO whether permission is given or not. Some villages understandably refuse to request co-ordination from the Israelis. After all, it is their land.

A day with Salfit farmers was arranged by the NGO PARC (Palestinian Agricultural Development Association) which is funded by the EU.

Salfit farmers, like many in the West Bank, are given limited permission to farm: once in early spring and again for the olive harvest, for six days only. This is not enough to ensure a good crop, which has had an impact on their livelihoods.

We gathered with the farmers at 6am in front of gate 408, which is actually two gates in the barrier fence separated by a security road and heavily laced with barbed wire. The army only allows 10 minutes to go through so lateness is not an option! The atmosphere is cheerful: families with their children milling around with the donkeys, all chatting and laughing. There is a slight apprehension in the air, will the army turn up on time? A full day is needed to harvest as many of the olives as possible.

At 6.15, an army jeep turns up and the gates are opened. The soldiers are not in a festive mood. Pointing their guns, they sternly collect the Palestinians’ IDs before letting them through. There is a slight delay for us five internationals, but after this minor harassment we join our allotted family to troop through dirt tracks and start the day’s picking. The day is hard (for me that is!) ameliorated by the farmers joking, singing and brewing up ‘chay’.

The picking has to finish at 3.30pm so that we are back in time to get through the gates that are, again, only open for 10 minutes. The army calls out the names on the ID cards and I notice that the bags of olives are offloaded from the donkeys and carried across the security road by the farmers – they are no light weight and I wonder if this is a further humiliation.

I asked the PARC co-ordinator, ‘Beka’, what we in the UK could do to help support the Palestinians, his reply was ‘pressurise for a political solution and buy Zaytoun olive oil’. This ‘will help the farmers to stay on their land’.

Would I recommend the experience – definitely yes, but maybe for me once was enough: an English project next? But then making mudbricks in the Jordan Valley sounds quite interesting....

Gill Knight is a member of Hastings Against War.

The march that shook Blair