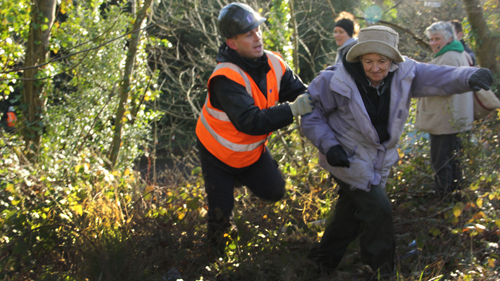 PN’s Gabriel Carlyle reports on the sometimes shambolic, always peaceful and often heroic resistance to the tree-felling in Combe Haven for the Hastings-Bexhill Link Road, and the lessons learned. 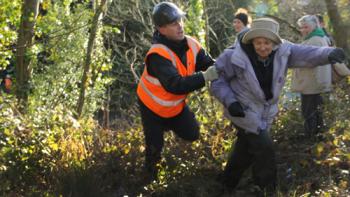 ‘I think we may be about to get steamrollered.’

Fellow activist Emily Johns and I had just returned from a packed public meeting in Crowhurst, the small village northwest of Hastings that would be severely affected by the planned Bexhill-Hastings Link Road (BHLR). In the final evaluation the participants had been near-unanimous in saying how energised they felt by the meeting. One man even said that he’d never felt more optimistic about our prospects for stopping the road.

But now that we were back in St Leonards, picking over the remains of a Chinese takeaway, I confided my fears to my friends.

‘We should have seen it coming. We should have prepared for this. We were taking the right steps, and doing the right things, but too slowly. I wouldn’t be at all surprised if they manage to fell all of the remaining trees on the route by Christmas.’

When a group is attacked it usually passes from a 'shock' phase to a 'individual action' phase.

The BHLR is the “first and the worst” of over 190 new roads that George Osborne’s Treasury, big business and local councils are pushing across England & Wales, in the UK’s largest road-building programme for 25 years (see PN 2551).

The first day of axing

After months of anticipation, the felling of the trees – key defences in any direct action campaign against a road – finally began on Friday 14 December, in what looked like a deliberate attempt to get the jump on the Road’s opponents.

Fortunately, we’d received multiple tip-offs the night before, and been able to muster 30 people to join us super-early on the old disused railway embankment near Adam’s Farm – home to a clump of trees directly on the route of the Road. A combination of the weather and activists in the trees had prevented any significant work from taking place despite the presence of over 100 security guards, chainsaw operatives and other contractors.

But the next day they were back – weekend or no weekend – in nearby Bexhill. So while eight of us were being shown the rudiments of tree-climbing, learning to prusik high into the trees in Crowhurst (in a workshop we’d organised over a month earlier) others scrambled to interfere with the felling. Unable to cross a water-filled ditch to reach the trees, activists resorted to knocking on the doors of the nearby houses.

The ladder was later confiscated by the road-builders, but not before two people had managed to get into the trees, seriously affecting the work (a licensed chainsaw operative is apparently not supposed to fell a tree if there is anyone within twice that tree’s height of it). At the end of the day, two people had been arrested, including one woman unlawfully arrested for refusing to give her name and address to the police.

But on Sunday they were back again, in both Bexhill and Crowhurst (though no trees were felled at the latter site after one plucky activist locked himself onto the underside of one of the contractor’s vehicles).

By this stage we’d realised that it was impossible to have the main campaign phones in the field (the day before, our tree-climbing workshop had been constantly interrupted by calls) and had set up a off-site “office” to try to relay information.

After the contractors knocked off (because of the dark) around 4pm, we headed for the public meeting in Crowhurst – another event planned weeks earlier.

Unlike in the two previous meetings (in Hastings and Bexhill), much of what had previously seemed abstract (support roles, transport, building treehouses etc) were now urgent necessities.

From the outset we’d been clear that we needed to have a strategy, and not just lurch from one action to the next. Moreover, we’d consciously drawn on the experience and knowledge of the ’90s anti-roads movement, while building relationships with local people in the areas most directly affected, raising funds, and priming everyone for the transition to direct action if and when work on the road began. All of this proved essential.

But we hadn’t been able to do enough in the time available: some of us had literally only climbed our first tree the day before; our first nonviolent direct action workshop was set for 12 January 2013, a month in the future; and we didn’t even have a usable map of the areas concerned, despite identifying this as key six weeks earlier.

The next day four locals, all in their 50s and 60s, took to the trees in Bexhill and were arrested, the last one released at 2am the next morning (Hastings police station closes to the public at 8pm, leaving supporters to mount chilly vigils on the pavement).

A local photographer had taken a picture of one of the women being manhandled by a security guard. Circulating the image on Twitter we caught the attention of the BBC’s environment analyst, Roger Harrabin. ‘Is this Swampy’s granny?’ he tweeted.

The next two days were probably our lowest point, with activists unable to do much else but keep vigil at Adam’s Farm. But on Thursday two intrepid climbers got high up into the trees in Bexhill, and were soon happily making tea, and tweeting their own pics out on a smartphone. Friday saw the first treehouses emerge at Adam’s Farm, after which the contractors finally halted work for Christmas and New Year.

The resistance had been sometimes shambolic, always peaceful, and occasionally heroic. And we were still there.

In the end the camp established on 21 December wasn’t finally evicted until 17 January – well over a month after contractors first attempted to fell the trees at the site – and it took them two days and seven arrests to remove everyone.

Intrigued by our persistence, Roger Harrabin paid us a visit and we ended up on Radio 4’s flagship Today programme, kicking off a blizzard of media interest ranging from the Daily Mail to the Guardian – assisted by one campaigner’s brainwave to mobilise local grandmothers to occupy a tree for a photoshoot in support of the protests.

With the benefit of hindsight it seems obvious that we should have role-played the whole thing months earlier. Both at the macro level (‘What would I do first if I were the contractor? Cut down all the trees....’) and the micro (‘I’m sitting off-site with the ability to send and receive texts. What information will I receive? And what systems do we need to get the info out?’).

We should also have primed ourselves for the shock that would be generated by these initial encounters, and the ensuing breakdown in internal communications.

When a group is attacked it usually passes from a ‘shock’ phase to ‘individual action’, as people respond individually, but without necessarily communicating what they’re doing to the rest of the group.

For us, for example, at one stage our communications hub was not aware for days that activists had been pepper-sprayed by the police.

As I write this, the second of the three Camps that were built during the seasonal lull is still standing.

When it falls, it will not be the end of the campaign. Numerous local initiatives, from legal observer workshops, to film screenings, a ‘Combe Haven Bus’ service, and a high court challenge (on archaeological grounds), have mushroomed over the past six weeks, and our experiences have taught us all the value of persistence.

Moreover, with one eye on our overarching strategy, we’ll hopefully be persisting to some purpose. Join us if you can!

For more info about the campaign against the BHLR see www.combehavendefenders.org.uk

The march that shook Blair