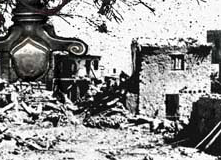 A photomontage by Cat Picton-Philips and Peter Kennard ‘The series of prints in Award arose out of our need to find a way to express our disgust with the war against Iraq and attempt to revoke our impotence in the face of the raging terrorism committed in the name of democracy. We wanted to use digital technology to make visceral images that used everyday stuff as directly as we could in order to respond to the war’s full horror with thousands of Iraqis being killed.

‘As the occupation became filthier, our prints became denser and denser. The scanner became like an etching plate and through using the newest technology our practice became strangely more and more connected to printmakers of the past. We looked at Rembrandt and Goya etchings, at how the etching, aquatint and drypoint layers on their metal plates became our dust and fabric, set layer upon layer on the computer. We looked at how their etchings developed from state to state, becoming darker, denser and more concentrated. Some of our prints went through 20 states, becoming more and more imbued with physical matter. We gritted the scanner; bled on it; threw torn-up rags, flags and ribbons on it; poured oil; then stamped on the stuff, burnt it and spat on the lot.

On some of the images, we used photographs taken with great bravery by documentary photographers in Iraq. Their commitment to keeping us informed often showed us the extreme degradation that this war has brought upon the Iraqi people. ‘It is a continuing process as we search for images that can represent our fury and the fury of the millions who oppose this action. Also we are attempting to make images that can represent the people of Iraq , who have fast become discardable pawns of Western leaders playing a deadly game called profit.’

Award: a photomontage by Cat Picton-Phillips and Peter Kennard. Their work will be showing in ‘Caught in the crossfire’, 24 January - 7 July, Herbert Gallery & Museum, Coventry