Some reflections on the Big Six Energy Bash demo in London on 3 May, which was 'kettled' by police. 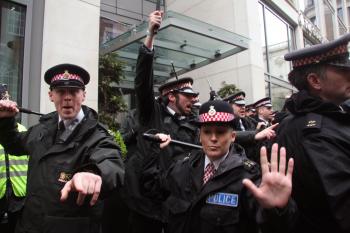 ‘Hold this a moment, while I staple these.’ Ninety minutes and nearly a mile later, I was still holding aloft the mid-section of the giant green dinosaur, and being used as cover by some masked youths making a grab for some plastic barriers. ‘If the police move in to arrest people, I’m off,’ the hind legs told me.

However, after some brief scuffles between baton-wielding police and young men in boiler suits no-one seemed to know what to do.
I was about to leave when the police trapped us in a ‘kettle’. ‘This would never happen in Spain,’ my friend explained. ‘There they hit you with batons and you run away. I prefer that.’

After three hours of being kettled we were released. Despite the obvious effort that had gone into organising the action, I felt thoroughly disempowered.

‘What was your best experience?’ I asked my Spanish friend. ‘The communal singing in the kettle,’ she replied instantly.

There’s a lesson there somewhere, I thought.

The Climate Justice Collective meets in Manchester on 2 June: