Prominent lawyers warned the British government against supporting an illegal attack on Iran as the British government consulted its legal advisors on its military options. Meanwhile, international negotiations over Iran’s nuclear programme stalled at a meeting in Baghdad in late May, as Western diplomats rebuffed concessions from the Islamic Republic. 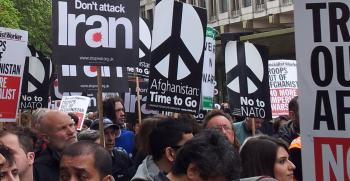 The diplomatic signs before Baghdad had been positive, as Iran indicated its willingness to give way on two major stumbling blocks: allowing inspectors from the International Atomic Energy Agency (IAEA) to check a suspect base, and freezing the enrichment of uranium to 20%, widely regarded as dangerously close to weapons-grade (90%).

In Baghdad, Iran learned that in return for these major concessions, it was being offered very little. ‘Giving spare parts for civilian aircraft is considered too little and too insulting for Iran, while it expected easing of oil sanctions,’ a senior Asian diplomat in Tehran said in the Financial Times.

Former CIA analyst Paul R Pillar commented: ‘as Iran has been brought to one side of the table and shown increasing flexibility in recent weeks, the direction of those represented on the other side of the table — and in particular in the US Congress — has been to pile on still more sanctions. Do some of the people involved really believe that this is the way negotiations work? That rather than being give and take, it is all take and no give? That the way to induce the other side to make more concessions is to punish it when it shows flexibility?’

The Iran crisis has moved up a gear with news that the British government has sought advice on the legality of participating in military action. On 23 May, BBC political editor Nick Robinson reported: ‘I have learnt that UK ministers are discussing not just the possibility of a military confrontation but what role, if any, Britain might play and whether any involvement would be legal.’ According to Robinson, the options being considered range from British diplomatic support for Israel through to the possible involvement of the British navy in the region.

Robinson also noted that in the event of US military action, the British government may need to give permission for the use of Diego Garcia, a British colony in the Indian Ocean, which is the major US base for carrying out strikes in the Middle East. He suggested that this issue could prove to ‘a Coalition breaker’ for the Liberal Democrats in the government.

On 18 May, Public Interest Lawyers wrote to British prime minister David Cameron to warn that attacking Iran, or even supporting such an attack, would be illegal. In the words of the letter, drawn up at the request of the Campaign for Nuclear Disarmament: ‘Just as in Iraq, military action [against Iran] in the absence of a coherent and evidenced threat and without the support of the United Nations Security Council, would constitute an egregious breach of international law.’

Surveying existing international law, the letter warns that: ‘pre-emptive military action against Iran for anything but an imminent attack would constitute a serious breach of international law’.

The next round of Iran negotiations takes place in Moscow on 18 June.

Smash EDO are holding a demo against war on Iran, and against the arms trade, on 4 June (see p16). Emily Johns and Milan Rai are Peace News co-editors. More info:
Race For Iran blogJustice Not Vengeance
Campaign Against Sanctions and Military Intervention in Iran