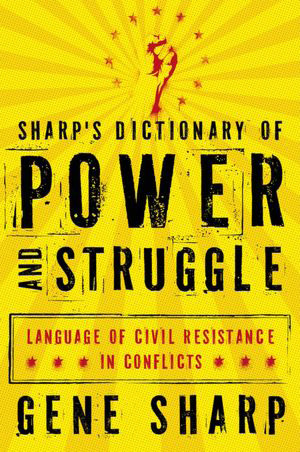 Gene Sharp is today better known than ever. This dictionary will further cement the 84-year-old American’s position as the world’s leading advocate of nonviolent struggle. Arising from decades of labour and action, including a stint at Peace News in the 1950s, Sharp hopes his book will bring clarity to a subject that has long been accompanied by politically-motivated ‘terminological confusion.’

Without clear thought and accurate definitions, he believes, ‘description, analysis, communication, and the transfer of knowledge are impaired, if not impossible.’

Made up of close to 1,000 entries, it’s a comprehensive and fascinating survey of power and resistance. ‘Blue Flu’, ‘Lysistratic nonaction’, ‘Nonviolent blitzkrieg’, ‘Autarky’ – all are explained within.

As with the bulk of his other work, much of the book focuses on nonviolent struggle against dictatorships. For example, ‘Atomization’ is defined as: ‘The condition under totalitarian systems in which the population is reduced to a mass of isolated individuals, separated from and isolated from each other’.

But does this only happen under authoritarian regimes? Noam Chomsky has long argued that, in the west, the population is ‘diverted with emotionally potent oversimplifications, marginalized and isolated.’

A list of Sharp’s famous 198 methods of nonviolent action and an extensive bibliography follow the dictionary. There are also three essays – one on how Slobodan Milosevic was overthrown in 2000, and another on the 2010/11 Tunisian uprising, written by Jamila Raqib, Sharp’s colleague at the Albert Einstein Institution.

Sharp’s short essay ‘On Power and Realism’ is particularly illuminating. ‘The assumption of the omnipotence of extreme dictatorships and of massive violence is false’, he notes. ‘We rarely recognize that powerful dictatorships and great violence have been defeated through non-violent means.’

Jam-packed with information and ideas, the book is an important resource for any activist – that is ‘a person who diligently and repeatedly tries to achieve some social, economic, or political objective, especially by participation in protest, pressure, organising, or resistance.’