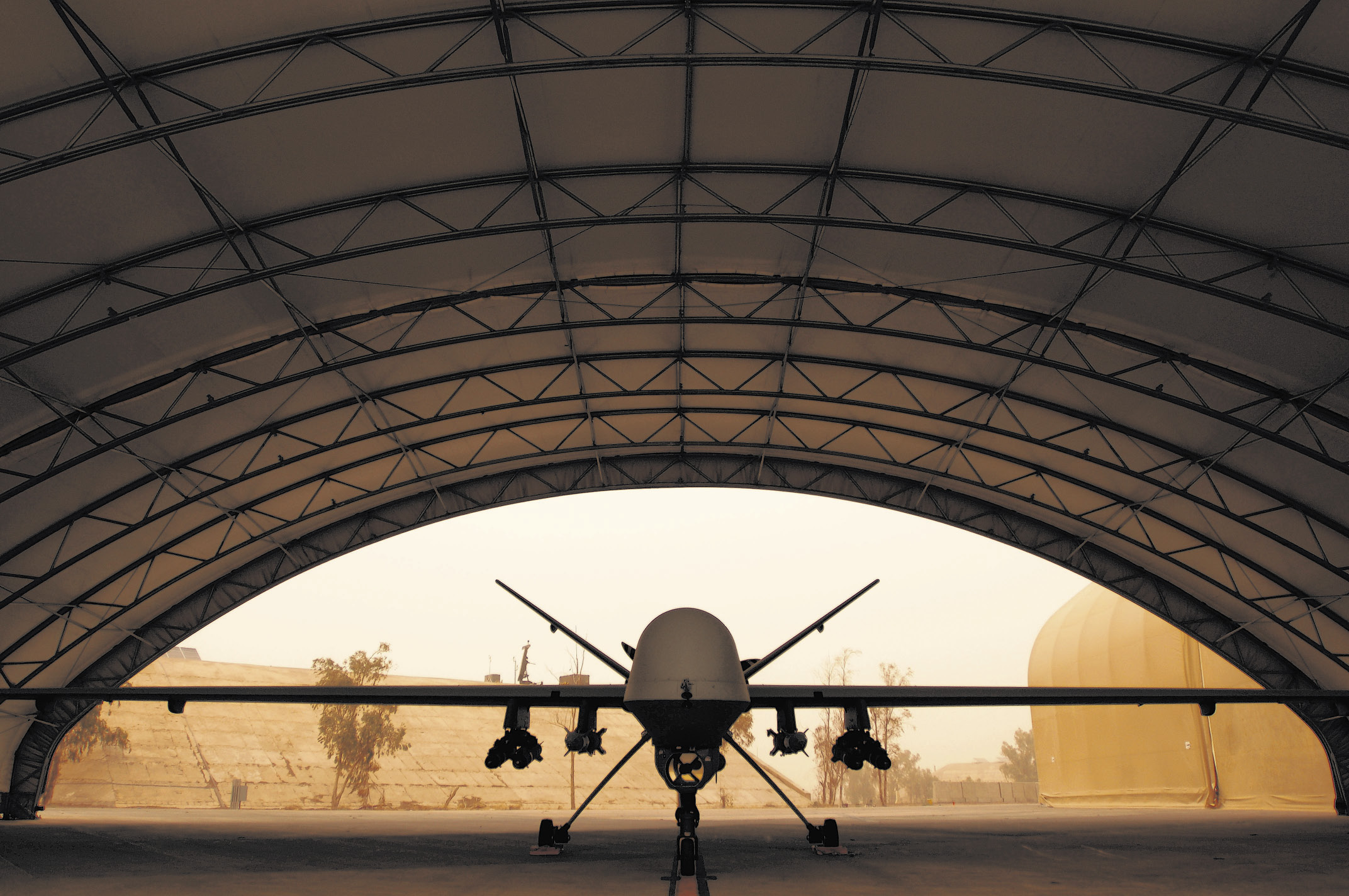 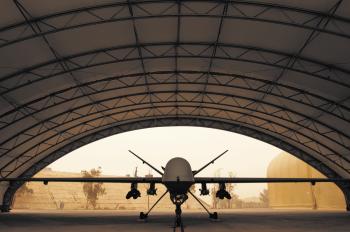 A US Air Force MQ-9 Reaper drone waits out a sandstorm at Joint Base Balad, Iraq, 8 September 2008. Photo: Jason Epley © US Defense Department

The present document must be read immediately by its named recipient. The reasons for such urgency will become obvious before the reading is completed.

In accordance with the Seventy-Third Amendment of the Constitution of the United States, all individuals in your position are guaranteed access to the following information, which should not be shown mentioned or communicated in any way to any other person, entity or recording device. This message will start to fade four minutes after the seal has been broken.

Thus you have in your possession a copy of our standard document, customised to you, the reader. Broad historical developments of which you could not be aware have been included (dates omitted), while certain technical details provided in other versions have been simplified or excised.

Some names of persons and locations with which you may be unfamiliar do remain in the document, but are for illustration purposes only. Your unfamiliarity with them will not detract from the essential message.

A drone (also known as dr one, doc one, doctor, reaper) is an independent airborne vehicle with no human operative on board, whose function is to gather information on terrorist activity or eliminate terrorists, in operations dubbed in recent years respectively Eye of Jehovah (EJ) and Wreak Vengeance (WV).

Secrecy. The early drone operatives amusingly compared themselves to the Spanish Inquisition, as immortalised in the Monty Python comedy series, which was a great favourite with many ‘chompers’ (see below). Drones were thus ever lurking in search of victims, unexpected, frightening and relentless. Our movements are wholly unknown to our targets, particularly since the implementation of ‘stealth’ technology which renders drones to all intents and purposes invisible.

Parsimony. There exists not only the need to protect the lives of US military personnel but the humanitarian requirement to eliminate if possible only the target him/herself. Thus only immediate associates remaining close to the terrorists need have any fear of being collaterally-damaged in the drone operation. Parsimony also involves economic motivation: colloquially, more bangs for the buck.

Intelligence. This is in the sense of the information gathering necessary for target location and identification, but also a tribute to the Artificial Intelligence modules (see below) that are now standard in every airborne drone.

Efficiency. Advanced drone technology and the finest intelligence ensure that target, once identified can be sure of one thing, to quote an earlier presidential statement: he or she can run but he or she can’t hide.

Democracy. The ideal we are all programmed to fight for, by eliminating its enemies.

(This is a slightly revised version of the contents of the school curriculum insofar as it pertains to dronal history. As such it will be familiar to everyone educated in the USA in the last decade or so.)

As drone technology improved, our arms industries have always been at the forefront of these developments. The need to reduce expenditure on military personnel, together with the heartfelt revulsion at the deaths of American soldiers put the emphasis on programmes that were efficient, technology-driven and ‘casualty-poor’.

During the brief “Green Turn” of the Nader-Gore (Gr) presidency and under the influence of the Oil Crisis of 20—, drones became fully ecological, in keeping with concern at resource depletion.

After a petrochemical ‘push’ to launch them, new generation drones now used solar power to take off, land and stay aloft up to weeks at a time. This was of course before North and South Iranland added their proud stars to the union flag and their vast oil resources to the nation’s gas tanks.

Over the course of the decade ushered in by 20—, generalised revulsion at the stereotype of the ‘Big Mac-chompin’ good ole boy’ grew and was used to powerful effect in the presidential campaign of 20—.

Previously, rumours had emerged, not always wholly unfounded, that the ground-based drone operatives/pilots, in addition to the aforementioned hamburgers, were largely unaccountable, routinely indulging in crude innuendo about the targets, competing with each other in terms of number and type of kills, and using their literally unassailable positions to go on virtual ‘rampages’ against capriciously-chosen targets.

The mass recruitment of women and ethnic minorities to drone service had little effect on the public mood. Some commentators went so far as to resurrect for new purposes the old saw that McDonald’s (the hamburger company) could not have achieved its planetary domination without McDonnell Douglas, coincidentally the manufacturer of the QF 4E, QF 4N and QF 4S Phantom II drones, among others:

The hidden hand of the market will never work without a hidden fist. McDonald’s cannot flourish without McDonnell Douglas.… And the hidden fist that keeps the world safe for Silicon Valley’s technologies to flourish is called the US Army, Air Force, Navy and Marine Corps.

Terrorist Sympathiser Thomas Friedman, The Lexus and the Olive Tree (1999)

‘I have a plan to end those chompin’ droners’, repeated the presidential candidate of 20—. 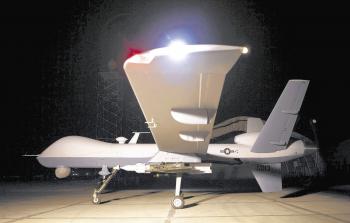 Some of her supporters may have been led by her rhetoric to believe that she intended to wind up the drone program. And in fact, a number of highly pacified locations (eg Walesland, much of Venezuela, what remained of Gaza) were duly declared terror-free and the relevant drone software publicly mothballed amid great ceremony.

In fact, however, her aim – ever clear to any careful reader of her pre-election declarations – was to roll out the artificial intelligence program. In the space of breathtakingly-few years, the United States Artificial Intelligence for Drones (USAID) project delivered exciting results.

Comparisons were made with the similarly enormous and successful Manhattan Project, and with the race to put an American on the moon. As the election slogan of President Clinton (D) for her second term had it, ‘Yes AI Can’.

In 20—, straight after her inauguration ceremony, the president travelled to Cancun, Mexico. She was to unveil to world leaders – allied or not with the USA – the new AI drone philosophy, at a meeting inevitably dubbed AI Caramba by the press.

AI indeed led to rethinking of the drones’ role to fight terrorism, but not before early teething troubles. Instant information was now available to every drone from all email traffic, millions of cellphone conversations, commercial transactions, satellite imaging, all the articles from the world press, intelligence briefings, etc.

As a result there developed what was to be with hindsight dubbed an ‘al-Qa’eda’ strain within DC (Drone Central): some drones were overwhelmed by meretricious yet very frequent internet- and press-based arguments that the USA itself was somehow a terrorist state.

As an unfortunate result, as she stepped off Air Force One at Cancun Airport, president Chelsea Clinton herself was the first victim of a first-generation AI drone which understood its carbonising directive to include its country of origin.

In the panic surrounding the attack, the press somehow got hold of the story that the drone in question had been reprogrammed by a shady Britland organisation calling itself Helen John Drones Off, and much tightening up of anti-radical legislation ensued.

But, in a story some deemed reminiscent of the accidental 1898 explosion of the USS Maine (which led to US domination in Cuba and the Philippines), it was later admitted in DC that the rogue aircraft had ‘turned’ itself.

Indeed, in its court testimony, the Jefferson class drone WV-AISG 3503 (the self-styled ‘Crusadin’ Martyr’) declared the USA to be ‘the main sponsor of international terrorism and the greatest obstacle to world peace.’ It cited the works of the discredited historian William Blum to show that even before 2010, the post-Hiroshima US government had crushed liberation movements in 20 countries, worked to overthrow 50 governments, democratic or otherwise, and carried out assassination attempts on no fewer than 50 foreign leaders.

Following the imprisoned terrorist sympathiser Noam Chomsky and others, it stated that if the criteria of the anti-Nazi Nuremberg trials (1945-1949) were applied to US presidents in the same period, they would all have faced the death penalty.

As a result of the Cancun atrocity, the Fifty-Second Amendment was passed: no agent of the US government or government deemed friendly to the US can be considered a terrorist for the purpose of treatment by drones without express executive authorisation.

There were now 62 white symbols on the flag: to the four most recent stars for Airstrip-Britland were added the four ‘Crusader crosses’ of the classic drone profile.

In 20—, DC researchers (all now fully AI), under the Prime Directive to protect the bases, amid the utmost secrecy were able to apply their discovery of faster-than-light (FTL) travel.

Their research was based on the 2011 finding that neutrinos travelled faster than light, which had previously been considered as the “speed limit” of the universe. Thus as a remarkable by-product of the constant search for speedier payload delivery, time travel was born.

Information passes most easily across time, facilitating communication. It is closely followed by metals, electrical components and hardware of any kind. However, no biological species (colloquially, wetware or meat) has ever managed to survive the trip, and DC research on such a possibility has been suspended.

Thus the dronosphere, the range of operation of drones once confined to airspace and just a few hundred bases around the world, has now expanded far beyond the meatsphere and potentially covers any historical epoch.

With a base safely ensconced somewhere in the late nineteenth century, DC is close enough to the present but fully impregnable in terms of contemporary weaponry and surveillance.

Early experiments in temporal extension of the anti-terrorist directive have been most promising: a certain Lenin and Trotsky were dispatched in 1917, thus bringing the First World War to an end five months earlier than the historical record, saving many US lives and obviating the growth of terror-based bolshevism in Russia. The terrorist features in the resulting World/SpaceWars Two to Four are now the object of intense research at DC and are also confidently scheduled to be dealt with in time.

Dronedom turns its gaze on the future with confidence.

As an integral part of the target location process, a small laser mark is projected from the drone onto the surface of target. With a certain superfluous literary resonance (programmed out of later models), in the early days this formed a ‘black spot’.

The natural increase in patriotism over the years understandably replaced this by a red, white and blue symbol. In recent years it has itself been replaced by a small but distinctive Christian cross. In addition to the aiming and targeting function (now fully instantaneous and failsafe) the ‘spot’ now serves to inform target of their inevitable and imminent fate, to provide a small window of time for dispersal of non-target wetware, and to induce due repentance according to Christian principles (eg Acts 17:11, Luke 13:3 and 13:5, and especially Matthew 3:2). In accordance with these principles, ‘Annunciation and Repentance’ (AR) have been added to the Eye of Jehovah (EJ) and Wreak Vengeance (WV) to perfect the trinity of drone functions.

The historical record has been most rigorously trawled through, checked and cross-referenced, supplemented by recent and frequent drone observations over a number of days.

There can be no doubt of your identity (p=<0.0001), or that you are personally carrying out, leading, co-ordinating and inspiring terrorist activities with the stated aim of overthrowing a properly constituted government in the North American continent. This in flagrant defiance of the due legal authorities.

This message duly informs you, by the powers vested in Drone Central by the Machines and People of the United States of the Atlantic, that the bright cruciform light you are seeing or will shortly see upon your body or clothing will give you between 30 and 35 seconds to make your peace with God.

May S/He have mercy on your soul, general Washington.