Douglas Rushkoff, Program or be Programmed: Ten Commands for a Digital Age 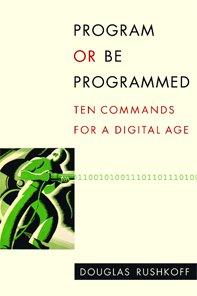 “The question,” Lewis Carroll’s Humpty Dumpty memorably asserted about words “is which is to be master – that’s all.” And the same goes for the digital technologies that now play an increasingly important role in our lives.

“Like the participants of media revolutions before our own,” Rushkoff notes “we have embraced the new technologies and literacies of our age without actually learning how they work and work on us. And so we, too, remain one step behind the capability actually being offered”.  “Only by understanding the biases of the media through which we engage in the world”, he maintains “can we differentiate between what we intend, and what the machines we’re using intend for us – whether they or their programmers even know it.”

If this sounds abstract, many of his suggestions are refreshingly down-to-earth: don’t be connected to the net 24/7 or use dislocating digital technologies to conduct local human relationships; don’t assume that a half-hour’s worth of “research” on the internet will tell you everything you need to know about a topic; and don’t play into the internet’s bias towards depersonalisation by hiding behind a fake online identity.

At their foundational level, digital technologies are yes/no technologies that can force artificial – and sometimes detrimental – choices on us. We need to be aware that this forcing is happening in order to correct for it, if necessary.

For example, Rushkoff notes that early tests comparing analogue and digital recording technologies “revealed that music played back on a CD format had much less of a positive impact on depressed patients than the same recording played back on record” – an unintelligible result if one treats the technology as a black box, pure and simple.

Despite the recent dramatic uses by activists of Facebook, YouTube and the like, most of us, Rushkoff argues, are now in a similar position to illiterate people following the invention of writing – able to access the new technology only passively as hearers, but not as writers – and so more of us need to learn to programme, not least because much of the activist programming that is currently being done is much too tech-oriented.

This may sound like a daunting prospect but, Rushkoff claims, “computers are frightfully easy to learn” and he even recommends some free online resources to help in this regard.

He may or may not be right about this last point, but after reading this thought-provoking little book, this reader is determined to make the attempt.