Michael Kaufman and Michael Kimmel, The Guy’s Guide to Feminism 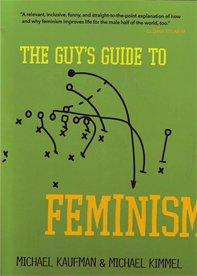 Michael Kaufman and Michael Kimmel, Professor of Sociology at the State University of New York, are two of the biggest names in contemporary Men’s Studies, writing heavyweight books with wordy titles like The Gender of Desire: Essays on Masculinity and Theorizing Patriarchy.

In contrast, The Guy’s Guide to Feminism is a short, consciously popular and non-academic introduction to feminism for men. Noting that feminism is still very much needed today, the authors argue “these ideas are relevant not only to women but very much for men.”

Writing an informal and humorous A-Z, Kaufman and Kimmel go from discussing autonomy and beauty to trafficking, vaginas and the White Ribbon campaign, which encourages men to examine and challenge their own attitudes to sexism and violence. Feminist concepts and arguments are introduced using a variety of cheeky narrative tricks – short essays, jokes, fake film scripts and amusing interviews with the authors.

Both the book and the style of feminism presented are very positive and inclusive in nature. Infectious too. Their central argument is that feminism is good for men as well as women because “it holds out the promise of better relationships, better lives for the women we love and better lives for ourselves.” They are keen to highlight the complexity surrounding the prostitution debate (“It’s got to be part of a much bigger discussion on economic transformation and greater social equality”) and they provide a strident defence of affirmative action. “Men have had an affirmative action program going back at least eight thousand years”, Kaufman and Kimmel quip. “Want to run a religion? A country? An army? A business? By and large, only men need apply.”

Occasionally, the almost flippant tone leads to frustratingly brief entries, leaving a feeling of incompleteness, such as the section on abortion which presents women’s “bodily integrity” as the only issue worth debating. Also, those who wish to research things in more depth are hampered by the book’s nominal footnotes. But this is like criticising a snail for being slow. The book is a deliberate attempt to reach the widest audience possible, with all the flaws that suggests.