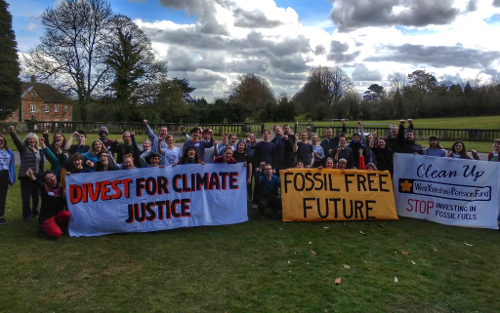 At the end of March, I travelled to Stafford to attend the second Fossil Free UK national gathering as a representative of Divest East Sussex – one of scores of local groups campaigning to get universities and local councils to ditch their investments in the fossil fuel industries (coal, oil and gas).

I’d arrived insanely early. Rapidly exhausting the delights of the town centre, I retreated to a bench in Victoria Park, beside the river Sow, where a young man with a guitar enlisted my help in saving a drowning duck. Later, when I went to the rendezvous point to catch the coach that would take us all to the venue, I found the duck-rescuer among the throng.

The half-hour journey brought us to Ingestre Hall, a 17th-century Jacobean mansion, now owned by the local council. It reminded me of the iconic TV series The Prisoner, though happily we were offered name badges rather than numbers.

In all, we were some 60-strong, with folk attending from as far afield as Edinburgh and Belfast.

Begun in 2012, the fossil fuel divestment movement may well be the fastest-growing divestment campaign that the world has ever seen. To date, over 880 institutions across the globe, with collective assets worth over $6 trillion, have made some form of divestment commitment.

The movement’s aim is to ‘bankrupt [the fossil fuel industries] morally’, weakening their political influence, to stop them holding back action on climate change.

At the gathering, some of the student campaigners reminisced about how utopian and ‘radical’ their demands for divestment had appeared when they first began making them just five years ago. Now they seem practically mainstream, with the governor of the Bank of England warning that investors face ‘potentially huge’ losses from climate change action that could make vast reserves of oil, coal and gas ‘literally unburnable’.

With multiple parallel sessions taking place it was impossible to take in everything that happened but here are my own personal highlights from the gathering.

On the first night, some participants were interviewed in front of the whole group, sharing their insights and experiences. One young woman, drawn into the campaign via her boyfriend, had gone from knowing literally nothing to taking part in a direct action blockade of an opencast coal mine in Germany – in just three months!

Two women from Yorkshire – one middle-class, one working class – talked about their experiences of cross-class organising. When it became apparent to the working-class woman that she was never going to be able to draw her working-class peers into the existing group, she had set up her own organisation to do just this. But the pair had also continued to work together, supporting one another and attending each other’s meetings. The sense of empowerment was palpable and moving.

Another highlight was a Skype interview with Beta Coronel, one of the main organisers of the Divest New York campaign, which in December succeeded in getting a divestment commitment from New York City’s five pension funds, whose assets total $189bn.

Though it took half an hour before the two sides could actually hear one another, it was great to get a glimpse under the hood at the tremendous grassroots organising and strategic savvy that had gone into achieving what veteran climate activist Bill McKibben hailed as ‘one of the biggest days in 30 years of the climate fight’.

A third highlight was the Saturday evening entertainment: a powerful and moving documentary, Thank You for the Rain, made collaboratively by a Kenyan farmer and climate activist, Kisilu Musya, and a Norwegian filmmaker, Julia Dahr. The combination of stunning visuals, a remarkable true story and a Global South perspective makes this an important tool for climate activists here in the UK.

In the gathering’s closing circle, numerous participants said how much the experience had made them feel more connected to others in the movement. With dozens of active local campaigns dotted around the country, and a global day of action (‘Rise for Climate’) scheduled to take place on 8 September, there’s certainly no shortage of work to do.

So join us! There’s never been a better time to get involved.

Gabriel Carlyle is the co-ordinator of Divest East Sussex.