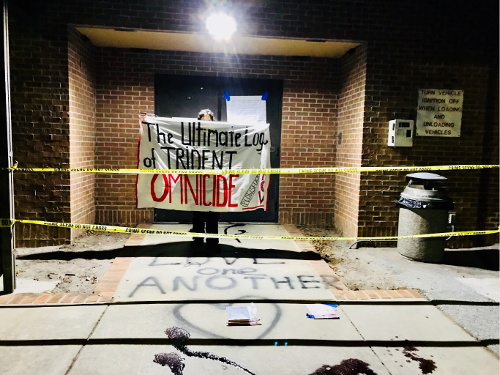 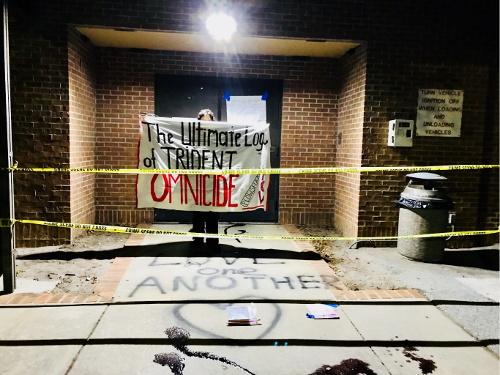 Absurd Convictions, Modest Hopes is the title of one of the more than 50 books by my late brother-in-law Daniel Berrigan (RIP and Presente!). It might be fair to say that we came to Kings Bay submarine base animated by the absurd conviction that we could make some impact on slowing, if not ending, the mad rush to the devastation of our magnificent planet. And this is no extreme overstatement. The six Trident submarines that consider Kings Bay their homeport carry enough destructive power to destroy all life on Earth. What difference can seven aging activists make?

We come with hammers to imprint the pristine coat of the weapon. Knowing a bit about how important image is in the military, the weapons so scarred may be trashed.

We come with blood (our own) to mark the weapons’ purpose as the spilling of blood and yes, we come with bolt cutters to violate the fences that protect the weapons that spell death to all life.

Admirals at Kings Bay, you must know as well or better than we, that the payload of your six Tridents is more than enough to obliterate all life on Earth (cf Daniel Ellsberg’s book Doomsday Machine: Confessions of a Nuclear War Planner, Bloomsbury, 2017, to learn more).

We plead with you to examine your priorities. Is this really what you want to be about?

‘Do you swear/affirm to tell the truth, the whole truth, and nothing but the truth, so help you [God]?’, Dennis Apel was asked as he took the stand in federal court for his witness at Vandenberg air force base.

Dennis looked to the judge and said: ‘If I am allowed to, I will, believe me, tell all the truth....’ The torch of truth-telling is then passed on to the next set of nuclear resisters. They in turn give to the next. So we await, from the bowels of our southeast Georgia keep, the next of the three phases (action, trial, prison) of the Kings Bay Ploughshares witness.

The second phase of our ploughshare’s witness, inspired by the 50th anniversary of Martin Luther King’s assassination, is to figuratively hammer the judiciary... in an attempt to convert the courts (plural) from legitimiser of nuclear holocaust sword to abolition ploughshare.

Our instrument, all self-righteousness aside, is what usually becomes the first casualty in the courtroom – truth. That’s the paradox, the torch passed on: We cannot shirk nor truncate ‘all the truth’ for it is the witness….

When they heard this, they raised their voices together in prayer to God. ‘Sovereign lord,’ they said, ‘you made the heavens and the earth and the sea, and everything in them. You spoke by the holy spirit through the mouth of your servant, our father David:

Why do the nations rage
and the peoples plot in vain?
The kings of the earth rise up
and the rulers band together
against the lord
and against the lord’s anointed one. (Acts 4: 23-26)

We walked in the dark, stars overhead, with Orion at our shoulder and the waning moon rising late.

Praise to you, dear God, for this gift of Eden. There were fireflies and croaking frogs to keep us company. And to think the logic of Trident is the obliteration of creation.

What did God whisper to my ancestors and then to me? Swords into ploughshares! We don’t mean to make everyone furious, but why turn our blood and hammers into spraypaint and boltcutters?*

Why continue to set the desecrated altar to the false idols of war? We walked onto a military base that harbours the ultimate destruction, and we prayed for the power of a message, of a witness that could reach many ears; conversion of free will towards life-giving work and away from death-dealing false constructs.

We strung up crime scene tape over the model missiles and over the door to the Strategic Weapons Facility Atlantic (SWFLANT), a place where war plans promise to take all we love. We wish to indict this war machine for what it is: immoral, illegal, and monstrous.

Our foolish plans desire to see a world in which the suffering is lessened, our leaders begin to know what it means if they pull the nuclear trigger. Our action is an invitation to all for a change of heart that will bring us to true revolution.

If you would like to write to the prisoners, they would very much appreciate contact with the outside world.

Top tips l don’t tell them how amazing they are l write about the work you are doing for peace and justice l describe your day/your life in detail
l don’t write anything that could get them – or you – into trouble.

You can write a postcard (but only a postcard, no letters allowed) to the Kings Bay Ploughshares prisoners. They can only receive plain white postcards – no labels, pictures, crayon, stickers, lipstick or any other kind of attachment on them. Only black or blue pens are allowed! You must include a handwritten return address (no labels).

You should include a prison number along with the person’s name:

(Don’t try to use the SecurTel online postcard system unless you have a US billing address.)

The seven have called for supporters to organise vigils calling for the dismantling of the triplets of militarism, racism, and economic injustice at Kings Bay or in our areas.

Another idea: a support potluck or party, maybe showing the film The Nuns, The Priests, and the Bombs. Or a group postcard-writing session.

They also suggest a group reading of Martin Luther King Jr’s From Chaos to Community.

The Ploughshares prisoners need travel for family and supporters, donations for legal research, snacks, support group costs and so on.

In the first four weeks, the group raised $5,250 of their target of $10,000. If you can make an online donation, here is their fundraising page:
www.tinyurl.com/peacenews3100

If you don’t have a way of making donations online, you can send a cheque (with ‘Kings Bay Ploughshares Solidarity’ written on the back) to PN, 5 Caledonian Road, London N1 9DY, and we will pass it on.

*Note: the charging documents and the magistrate referred to the seven possessing boltcutters and spraypaint when they were arrested, but ignored the blood and hammers they carried.