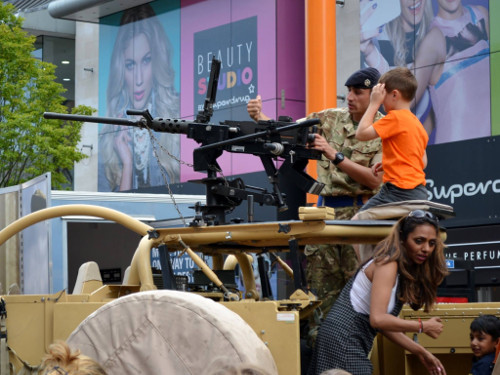 A ForcesWatch interview with poet and campaigner Ambrose Musiyiwa 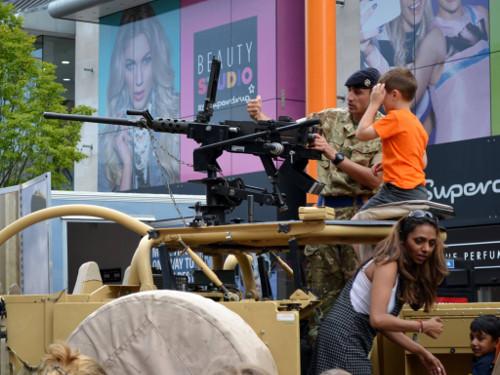 ForcesWatch: Hi Ambrose! Thank you for putting on such a fantastic event in Leicester at the end of last year as part of the Leicester Human Rights Arts and Film Festival, ‘This is Belonging: Challenging militarism at home and abroad’. We had a lively and informed discussion, and it was great to be able to take part. Could you tell us a bit about how Leicester for Peace is responding to the event’s discussions, and any further comments you have?

Ambrose Musiyiwa: Firstly, thank you for taking part in ‘This is Belonging: Challenging militarism at home and abroad’. Your contribution and the work you and ForcesWatch are doing at a national level informs us and ensures we are aware of what is happening nationally. Your work informs the decisions and actions we take at a local level. We appreciate how supportive of local groups you and ForcesWatch are.

‘This is Belonging’ looked at both how the army is targeting children in Leicester and other deprived communities around the country, and how communities in Leicester and beyond are resisting the militarisation of school, public space and childhood. Participants who took part in the event alongside ForcesWatch included Leicester city council; the Leicester National Union of Teachers Section of the National Education Union (Leicester NUT Section of the NEU); and Penny Walker and Sue Taylor (Leicester for Peace).

Leicester NUT Section of the NEU secretary, Joseph Wyglendacz, talked about how the National Union of Teachers opposes the army’s presence in schools and the targeting and recruitment of children by the army.

After the meeting, and before her retirement, Sarah Levitt passed on the concerns that were raised at the event to sir Peter Soulsby, the mayor of Leicester, and Penny, Sue and others met the mayor, reiterated the concerns that are in the city around the armed displays, the recruitment drives and how the army is letting children play with guns in public spaces in the city.

ForcesWatch: At the launch of the ‘Take Action on Militarism’ pack in October last year, you spoke powerfully about the militarisation of the police force in Leicester. What have you noticed happening around you, and how does it affect local communities?

Leicestershire police routinely deploys visibly-armed [white] men to police low-crime and ethnically-diverse environments like the Riverside Festival, Diwali and the Leicester Caribbean Carnival. Because of the city’s demographics and because of the ethnic and gender make-up of the armed officers, the deployments bring into sharp focus inequalities in the city that are based on race and gender… inequalities that people here have previously appeared to tend to ignore.

On the one hand, it is good that these inequalities are now in focus because, hopefully, something can be done about them. An example of this can be seen in the significant, concerted and commendable efforts that Leicestershire police is making to build a police force that reflects the community it serves and which is informed by an equally diverse panel of advisors who are drawn from that community.

On the other hand, given the history of institutionalised racism and violence that Britain has, continuing to deploy visibly-armed [white] police officers to low-crime environments like the Riverside Festival, Diwali and the Leicester Caribbean Carnival, heightens tensions and pushes communities apart.

The festivals that we have in Leicester do not warrant the deployment of visibly-armed police officers. There is nothing that happens at the festivals that cannot be handled by unarmed officers who are part of the communities they serve.

The deployments are part of a campaign by Leicestershire police to normalise the presence of armed police officers on the streets of Leicester; to normalise the deployment of armed police officers to environments that can be handled by unarmed officers; and to change the way communities are policed, and move away from ‘policing by consent’ to ‘policing by force’.

Taking that campaign to its logical conclusion will lead to a militarised police force that dehumanises and sees the people it comes into contact with as a threat. Taken together with the guns that the police want officers to carry makes us worried that in the coming years, we will see the police in Leicester start discharging weapons at the people they come into contact with more.

ForcesWatch: What would be, in your view, a better response to security concerns?

Ambrose: Leicestershire police acknowledges that the festivals that we have in Leicester are low-crime environments. The festivals should, therefore, be policed as such. There is no need for visibly-armed police officers to be seen at the festivals. Their presence is a waste of police time and resources because they are not needed there.

When Leicestershire police deployed visibly-armed police men to the 2017 Leicester Caribbean Carnival, organisers said they welcomed the armed presence because the terrorist threat in Britain then, as now, was at ‘severe’.

However, since records began, the threat level in Britain has, in more cases than not, been ‘severe’. The visible armed police presence at the Leicester Caribbean Carnival did not reduce the threat level. If anything, the armed police presence at low-crime environments like these services the threat level and maintains it at ‘severe’ while also creating the potential for conditions that can turn the threat level from ‘severe’ to ‘critical’. An example of these conditions include pushing heavily-armed [white] men onto an event that is patronised predominantly by unarmed [black] people. This adds to the oppression that the community feels and experiences because, nationally, the police routinely uses more violence against black people than any other ethnicity.

Similarly, the presence of heavily-armed white men at Diwali feeds the hostility that has been engineered by some politicians and some sections of the media against people who are perceived to be Muslim who, for several decades, have been framed as terrorists and as fair game for attacks and vilification.

The deployment of armed officers to low-crime community events harms community relations. The policing of Leicester events should be left to regular, unarmed police officers who are part of the communities they serve.

ForcesWatch: How does it feel to have increasing signs of militarism in Leicester – such as the recruitment stands on the streets, and police officers with guns? And how can people respond?

Ambrose: People in Leicester are aware of the militarisation that is taking place around them and they are responding to it by documenting the militarisation, by questioning it, and by looking to reduce the harms that are caused by the presence of armed men on the streets of the city.

It is highly likely that this campaign will continue for as long as the institutions that are driving the militarisation continue to do so because Leicester has a long history of campaigning for peace. For example, there was a significant anti-war movement in the city in the run-up to the First World War. The city also has significant numbers of people who were conscientious objectors during World War I and II. And, in the 1980s, Leicester declared itself a nuclear-weapon-free zone.

The city is currently part of Mayors for Peace, an international organisation of cities dedicated to the promotion of peace that was established in 1982 as part of the response to the death and destruction that was wrought on Hiroshima and Nagasaki when, in August 1945, the United States used atomic bombs on the cities destroying them and killing over 140,000 people.

The city has also been identified as having had a profound influence on one member of the team from the International Campaign to Abolish Nuclear Weapons (ICAN) which was awarded the 2017 Nobel Peace Prize in recognition of the work it put into preparing and promoting the Treaty on the Prohibition of Nuclear Weapons. The treaty seeks to make nuclear weapons illegal and was adopted by 122 countries in the United Nations in July 2017.

Commenting on how Leicester influenced him, ICAN team member, professor Matthew Bolton, said: ‘Growing up in Highfields exposed me to the great diversity of ways to be human. In school, we celebrated Eid, Christmas and Diwali. This experience endowed me with a faith that people from a variety of backgrounds can figure out how to get along, something I have also found in New York.

‘I continue to be inspired by the example of the people I met as a child who were committed to making the world a better place and willing to fight for it.’

Leicestershire police are now bringing guns to public manifestations of the festivals professor Bolton mentions. Despite the deployments, people in and around the city continue campaigning for peace. They continue campaigning for a culture that encourages dialogue and nonviolent means of solving disputes. Signs of this can be seen in how Leicester has a thoroughfare that is called ‘Peace Walk’ which, among other things, memorialises peace activists and conscientious objectors.

The city has also just hosted ‘The Art of Protest’, an exhibition focusing on 40 years of peace campaigning in Leicester, illustrated by the work of peace campaigner, artist and poet, Anna Cheetham. Given this history, it is highly likely that people in Leicester will soon start campaigning to rescue the streets and the festivals back from the armed men who are taking them over.

Ambrose Musiyiwa is a poet, a journalist, and an events organiser. The author of poetry pamphlets including The Gospel According to Bobba, he co-edited the poetry anthology Welcome to Leicester (Dahlia Publishing, 2016). Ambrose facilitates a community media channel, CivicLeicester, and also organises the Leicester Human Rights Arts and Film Festival. To see the Leicester Charter on the reduction of the militarisation of children and young people:
www.tinyurl.com/peacenews3032