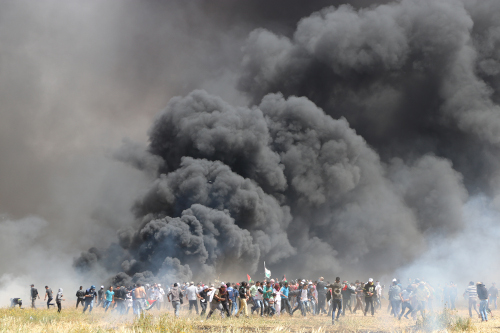 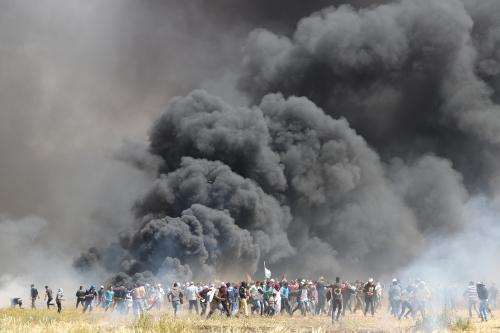 The death toll continued to rise as PN went to press. Israeli snipers killed over 100 unarmed Palestinians in six weeks of demonstrations at the fence separating Gaza from Israel.

During the ‘Great March of Return’, Israeli forces injured more than 5,000 protesters, over 3,000 of them with live fire (bullets). Israeli snipers shot and injured 1,360 unarmed Palestinians on 14 May alone. Of the 58 people killed by Israeli forces that day, six were under the age of 18, according to Gaza’s ministry of health.

The youngest to die of tear gas was an eight-month-old baby, Laila Anwar al-Ghandour. The youngest to be shot dead was a teenage boy, Ezz el-din Musa Mohamed Alsamaak (14).

In the months leading up to the protests, the ruling party in Gaza, Hamas, several times offered Israel a long-term ceasefire, it was revealed on 7 May. Israeli journalist Amos Harel noted that, despite the killing of dozens of Palestinians during the border protests, no rockets were fired at Israel from Gaza. This showed restraint by Hamas – and a Hamas ban on attacks by others.

In return for a long-term ceasefire and an exchange of prisoners and bodies, Hamas asked for an easing of the illegal Israeli siege on Gaza and large-scale infrastructure repair.

A similar proposal was made publicly by a senior Hamas official in the West Bank, Hassan Yousef, last September.

As we’ve previously reported (PN 2506), Hamas has been making similar offers since 1997.

Israel has rejected these offers and instead used extreme brutality – probably to try to provoke violent retaliation.

On 21 March, contemplating the start of the Great March of Return, Israeli journalist Bradley Burston described Palestinian mass nonviolence as ‘the sum of all fears of Israel’s ruling right’.

Jordanian journalist Osama Al Sharif described mass Palestinian nonviolence as ‘Israel’s worst nightmare’, adding: ‘Israeli shameful reaction, which is tantamount to a war crime, underlines its fear that the Palestinian people have finally embraced a weapon of resistance that is more dangerous to Israel than Hamas’ rockets or the Palestinian National Authority’s vow to seek recognition in international forums.’

The campaign began on 30 March with five tent camps set up over 700 metres from the Gaza-Israeli border, outside the Israeli military’s ‘buffer zone’.

The co-ordinating committee said the events should be ‘fully peaceful’, showing ‘a new form of resistance different to confrontations and throwing stones’. Despite the wishes of the organisers, there was also the burning of tyres and Israeli flags, and the throwing of Molotov cocktails and stones.

The protests began on ‘Land Day’, on 30 March, the anniversary of the Israeli massacre of six Palestinian citizens of Israel in 1976 as they protested against the Israeli government’s seizure of hundreds of acres of Palestinian land.

The Great March of Return ended on ‘Nakba Day’, on 15 May, the day after the US opened its new embassy in Jerusalem. The Nakba was the ‘Catastrophe’ of early 1948, when hundreds of thousands of Palestinians were driven from their land, first by Zionist paramilitary groups and then by the new Israeli army.

The Great March of Return was initiated by independent activist Ahmed Abu Ratima. The march had the support of the major Palestinian factions, including Hamas (the elected rulers of Gaza), Palestinian Islamic Jihad, the Popular Front for the Liberation of Palestine (PFLP) and (very reluctantly) Fatah, the ruling body in the West Bank.