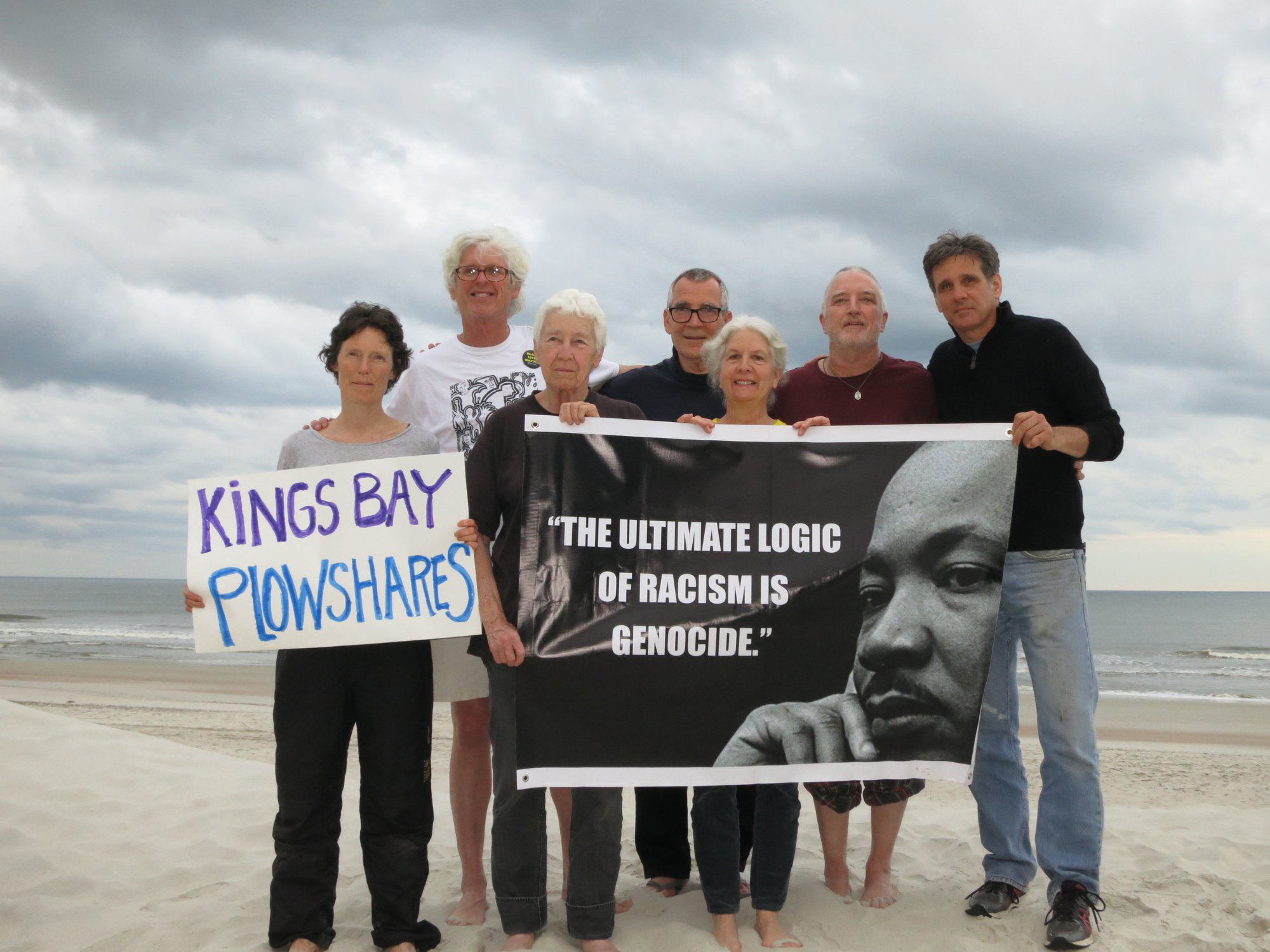 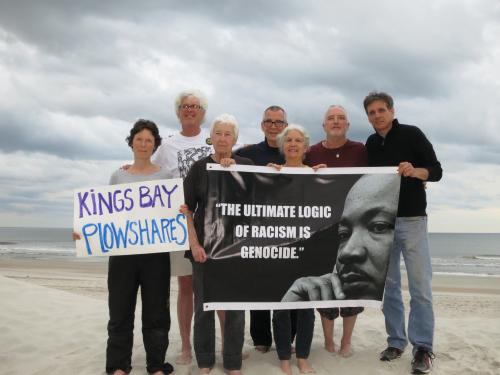 Seven Catholic peace activists are facing up to 10 years in prison each, after breaking into a Trident submarine base at Kings Bay in Georgia, on the east coast of the USA. On 4 April, the 50th anniversary of the assassination of civil rights leader Martin Luther King Jr, the seven entered Kings Bay in order to attempt the latest ‘Ploughshares’ disarmament action.

Each of the six Trident submarines in Kings Bay carries about 100 nuclear warheads (on 20 missiles). The W76 warhead has a yield of 100 kilotons of explosive power; the W88 has a yield of 455kt. The Japanese city of Hiroshima was destroyed in August 1945 with a 14kt warhead.

The Kings Bay Ploughshares activists, five of them from Catholic Worker groups around the country, carried hammers and baby bottles of their own blood to three locations on the base. They attempted to symbolically convert US weapons of mass destruction and to fulfil the biblical prophecy to ‘beat swords into ploughshares’. The seven used crime scene tape and spraypaint (pictured opposite). They hung banners saying: ‘The ultimate logic of racism is genocide, Dr Martin Luther King’, ‘The ultimate logic of Trident is omnicide’, ‘Nuclear weapons: illegal – immoral.’

The activists at the nuclear weapons storage bunkers were: Elizabeth McAlister, 78, of Jonah House, Baltimore; father Steve Kelly SJ, 69, of the Bay Area, California; and Carmen Trotta, 55, of the New York Catholic Worker.

At the beginning of May, the seven were charged by the US government with ‘depredation of government property’, ‘destruction of property on a naval station’, conspiracy, and trespass. These federal charges were added to the local charges of ‘interference with government property’, ‘possession of tools for the commission of a crime’, and criminal trespass. The maximum sentence for the depredation charge is 10 years in prison. The two trespass offences are ‘misdemeanours’ and carry maximums of six months and a year. The other four charges (‘felonies’) each have a maximum penalty of five years in prison.

We come in peace on this sorrowful anniversary of the martyrdom of a great prophet, reverend Dr Martin Luther King, Jr.

Fifty years ago today, 4 April, 1968, Dr King was assassinated in Memphis, Tennessee, as a reaction to his efforts to address ‘the giant triplets of racism, extreme materialism and militarism.’

We come to Kings Bay to answer the call of the prophet Isaiah (2:4) to ‘beat swords into ploughshares’ by disarming the world’s deadliest nuclear weapon, the Trident submarine.

We repent of the sin of white supremacy that oppresses and takes the lives of people of colour here in the United States and throughout the world. We resist militarism that has employed deadly violence to enforce global domination. We believe reparations are required for stolen land, labour and lives.

Dr King said: ‘The greatest purveyor of violence in the world (today) is my own government.’ This remains true in the midst of our endless war on terror. The United States has embraced a permanent war economy.

‘Peace through strength’ is a dangerous lie in a world that includes weapons of mass destruction on hair-trigger alert. The weapons from one Trident have the capacity to end life as we know it on planet Earth.

Nuclear weapons kill every day through our mining, production, testing, storage, and dumping, primarily on Indigenous Native land. This weapons system is a cocked gun being held to the head of the planet.

As white Catholics, we take responsibility to atone for the horrific crimes stemming from our complicity with ‘the triplets.’ Only then can we begin to restore right relationships. We seek to bring about a world free of nuclear weapons, racism and economic exploitation.

We plead to our church to withdraw its complicity in violence and war. We cannot simultaneously pray and hope for peace while we bless weapons and condone war making.

Pope Francis says abolition of weapons of mass destruction is the only way to save God’s creation from destruction.

Clarifying the teachings of our church, pope Francis said: ‘The threat of their use as well as their very possession is to be firmly condemned… weapons of mass destruction, especially nuclear weapons, create nothing but a false sense of security. They cannot constitute the basis for peaceful coexistence between members of the human family, which must rather be inspired by an ethics of solidarity.’

Nuclear weapons eviscerate the rule of law, enforce white supremacy, perpetuate endless war and environmental destruction and ensure impunity for all manner of crimes against humanity. Dr King said: ‘The ultimate logic of racism is genocide.’ We say: ‘The ultimate logic of Trident is omnicide.’ A just and peaceful world is possible when we join prayers with action. Swords into Ploughshares!

For more information on the Kings Bay Ploughshares 7, please see: www.kingsbayplowshares7.org. There have been 100 Ploughshares/Plowshares actions since 1980, mostly involving the hammering of military equipment. The first British Ploughshares was the 1990 Upper Heyford Ploughshares action of Stephen Hancock and Mike Hutchinson. The most famous British action was the women-only Seeds of Hope/East Timor Ploughshares action against a Hawk jet due to be exported to Indonesia to be used against the people of East Timor, described in Andrea Needham’s wonderful 2016 book (published by PN): The Hammer Blow: How 10 Women Disarmed a Warplane. Sam Walton and Dan Woodhouse were acquitted last October for their Ploughshares action trying to prevent war planes being exported to Saudi Arabia for use in Yemen. (PN 2612–2613)