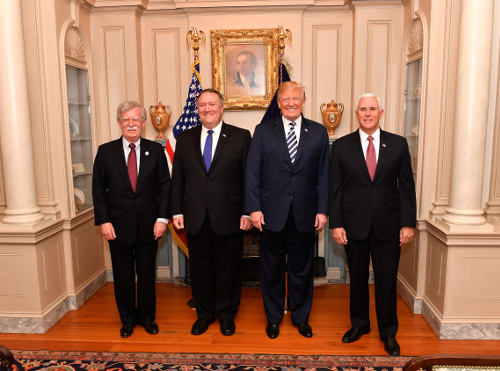 US national security advisor John Bolton, US secretary of state Mike Pompeo, US president Donald Trump and US vice-president Mike Pence (left to right) on 2 May 2018. Photo: US State Department

01 Jun 2018 News by Milan Rai
US national security advisor John Bolton, US secretary of state Mike Pompeo, US president Donald Trump and US vice-president Mike Pence (left to right) on 2 May 2018. Photo: US State Department

We can expect a lot of twists and turns over the next month, before the unexpected 12 June summit in Singapore between US president Donald Trump and North Korean leader Kim Jong Un. There is a reasonable way forward that experts agree gives a solid chance for building towards some kind of peace. It’s possible but unlikely that Trump will head in that direction, which means the likely outcome of the summit is disaster.

The sensible path, laid out by US academics Carla P Freeman and Mel Gurtov in mid-April, is to leave the denuclearisation agenda for later, and to focus for now on trust-building.

Freeman and Gurtov suggest a three-stage peace process with ‘symbolic’ actions (such as the release of three US citizens held by North Korea, which happened in May), followed by ‘substantive’ actions (such as the warehousing of North Korean nuclear weapons, and the lifting of some US sanctions). Finally, ‘deeper engagement’ could lead to a peace treaty guaranteed by China and Russia as well as the US.

That’s not exactly what the Trump administration is going for. We’re seeing different approaches to North Korea from the two recently-promoted US hardliners, Trump’s secretary of state Mike Pompeo and his national security adviser John Bolton. Both came into office in April; they’ve been putting out quite different messages.

Pompeo has been to North Korea twice for ‘warm’, ‘good’ meetings with Kim, and has said emphatically that there is ‘complete agreement’ about the ultimate objectives. Pompeo says: ‘we began to work through the modalities of how we achieve that’, which sounds very concrete.

The former CIA chief added: ‘If North Korea takes bold action to quickly denuclearise, the United States is prepared to work with North Korea to achieve prosperity on the par with our South Korean friends’. (Some financial analysts have estimated that such a development effort might cost $2 trillion over 10 years.)

That all sounds very positive, as though the US and North Korea have laid the basis for a successful summit, they have the same understanding of the issues, and a large measure of agreement, going into this crucial negotiation.

On the other hand, John Bolton has been doing his best to poison the atmosphere. On 30 April, Bolton said on Fox News Sunday that Kim would have to abandon his ‘entire nuclear programme’ before any sanctions against North Korea were lifted. Bolton made a point of referring to the nuclear disarmament of Libya as a precedent: ‘We have very much in mind the Libya model from 2003, 2004’.

Bolton knows very well that the North Koreans see the disarmament of Libya as a strong argument for keeping nuclear weapons. When US-led forces attacked Libya in 2011, toppling colonel Muammar Gaddafi, a North Korean foreign ministry official said the West’s nuclear bargain with Libya had been ‘an invasion tactic to disarm the country’, which was teaching ‘a grave lesson’.

In January 2016, the official North Korean news agency commented on the regime’s fourth nuclear test: ‘The Saddam Hussein regime in Iraq and the Gaddafi regime in Libya could not escape the fate of destruction after being deprived of their foundations for nuclear development and giving up nuclear programmes of their own accord.’

The North Koreans aren’t alone in this assessment. For example, Dan Coats, Trump’s director of national intelligence said last July: ‘The lessons that we learned out of Libya giving up its nukes… is, unfortunately: If you had nukes, never give them up. If you don’t have them, get them.’

The biggest difference between the Pompeo and Bolton approaches to North Korea are in how and when US sanctions might be lifted. Bolton has said clearly that North Korea must satisfy all US demands before receiving any reward.

Pompeo seems to be much more open to the classic North Korean step-by-step approach of ‘action for action’.

“John Bolton is ‘working an angle’”

South Korean academic Yang Moo-jin, professor at Kyungnam University, stated the obvious, telling the FT: ‘There is a zero possibility that Pyongyang would agree to dismantle its nuclear weapons first before it gets any incentives.’ Bolton knows this.

US nonproliferation expert Jeffrey Lewis thinks that Bolton is ‘working an angle’ as he presents a speedy, trouble-free path to a nuclear-free North Korea. Lewis suggests that: ‘Bolton won’t try to kill diplomacy by opposing it. Rather he’ll kill it by making the perfect the enemy of the good. By raising the prospects of a Libya-style surrender, the much more modest settlement offered by Kim looks sad by comparison.’

In this scenario, once it becomes clear that Kim will not abandon his nuclear weapons immediately, and certainly not without the US paying a heavy price, Trump is likely to ‘lash out, blaming his secretary of state, Mike Pompeo, for his role in setting up the fiasco – and turning the keys over to Bolton’.

Thomas Wright, a US analyst at the liberal Brookings Institution, suggested in early May that, despite both being hard-line right-wing hawks, Bolton and Pompeo were destined to clash.

In foreign policy terms, Bolton is a ‘litigator’ (an aggressive lawsuit lawyer), Wright suggests, one of those who ‘see national security policy as a way of settling scores with enemies, foreign and domestic, and closing the file’. The point is to demonstrate unilateral US power ‘before moving on to the next target’. Pompeo, on the other hand, is what Wright calls a ‘planner’, someone who wants to have a plan for the day after the score-settling.

Both litigators and planners are willing to use criminal violence against other countries, defying the UN and international law. Planners are just a bit more long-term in their thinking about how to look after US interests and cope with the consequences of US actions.

Wright also suggests that Bolton sees this posting as his ‘last chance to accomplish his life’s work’ of securing complete US freedom of action, while Pompeo sees his current position as a stepping stone, possibly to the presidency itself. Bolton is fine with burning bridges in all directions, Pompeo wants successes that secure his own future.

What counts as a success in relation to North Korea? Ideally, North Korea giving up all of its nuclear weapons and nuclear weapons-making capabilities. That is very unlikely, despite warm words from Kim Jong Un.

A South Korean newspaper reported that during Pompeo’s second visit, he asked Kim to fly five nuclear bombs to France to be inspected and dismantled, on a monthly basis. Kim’s response was not reported.

Pompeo knows that North Korea needs a security guarantee before it can think about giving up nuclear weapons. Pompeo said in May that he discussed with the North Korean leader ‘the strategic decision’ in front of him, and ‘if he is prepared, in exchange for the assurances we are ready to provide to him, if he is prepared to fully denuclearise’.

A realistic success in relation to North Korea, in mid-2018, would be to start a trust-building process that continues North Korea’s suspension of missile and nuclear tests and, in return, halts US military exercises in the area that practice regime change (including dry runs at assassinating Kim). Freeze-for-freeze.

US national security advisor John Bolton, US secretary of state Mike Pompeo, US president Donald Trump and US vice-president Mike Pence (left to right) on 2 May 2018. Photo: US State Department

More articles about the Korean crisis can be found at:
http://peacenews.info