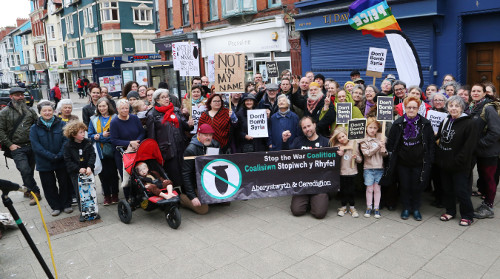 01 Jun 2018 News by Kelvin Mason
‘Not in Our Name!’ Ceredigion says bombing Syria is not the answer. Photo: Marian Delyth

People from across Ceredigion and beyond gathered in Aberystwyth on 16 April to protest against the UK government’s decision to bomb Syria. Organised by Stop the War Ceredigion and Aberystwyth Peace and Justice Network, the protest attracted more than 70 people.

It was part of a UK-wide series of protests organised by the Stop the War Coalition against the UK government, referring to the facts that the bombing took place without UN approval, without a debate or vote in the UK parliament, and without the action being part of a coherent strategy to bring peace to war-torn Syria.

Johnny Gaunt of Stop the War Ceredigion introduced a number of speakers from across the political spectrum and from civil society. Between speakers, Côr Gobaith sang songs of peace and justice.

Ceredigion Labour Party member Dinah Mulholland spoke movingly, bringing tears to the eyes of many people in the crowd: ‘It is about children. Our children here and our children there. It’s about parents in Syria terrified for their children’s future, risking impossible journeys to take their kids to some place just a bit safer, risking drowning and then the horror of camps. It’s about parents here, terrified of what this will mean for our children and for the world. We hugged our children closer on Saturday morning…

From the Westminster debate on the bombing, Ceredigion MP Ben Lake sent a message: ‘The weekend’s use of military force strikes me as no more than a tokenistic gesture that completely fails to grasp the complexity of the conflict, and the seriousness of the suffering. The further use of military force will not bring about lasting peace, and neither will it stop the use of chemical weapons.

‘A concerted effort to bring about a political solution – through the UN – must be pursued. I believe that the consent of parliament should have been sought before the UK’s involvement in this mission, and consider it to be a further shameful stain on the record of this government that they did not do so.’

Town councillor Talat Chaudhri said: ‘Air strikes have repeatedly failed in the past. Only negotiating can end this war and avoid more in the future.’ Concluding the evening, Harry Rogers told those assembled: ‘If you believe in democratic political solutions to conflict and that a rush to war is wrong… join the Stop the War Coalition to help build a peaceful world.’
01.%20armsfair.jpg