Saying no to Syria strikes 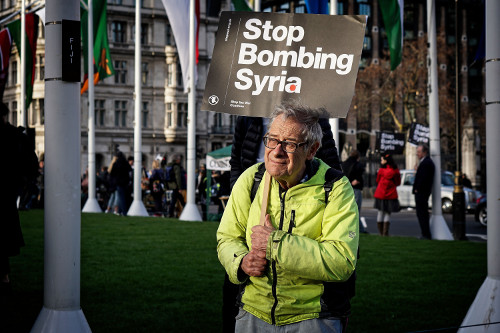 On 16 April, hundreds protested in Parliament Square, London, after 100 missiles were fired at targets inside Syria two days earlier by Britain, France and the US. The three governments claimed to have proof that the Syrian government was responsible for chemical weapons attacks the previous week in Douma, on the outskirts of Damascus. Inspectors from the Organisation for the Prohibition of Chemical Weapons collected samples from Douma on 21 and 25 April and were expected to release a report soon after PN went to press. The ‘Stop Bombing Syria’ demonstration was organised by the Stop The War Coalition.