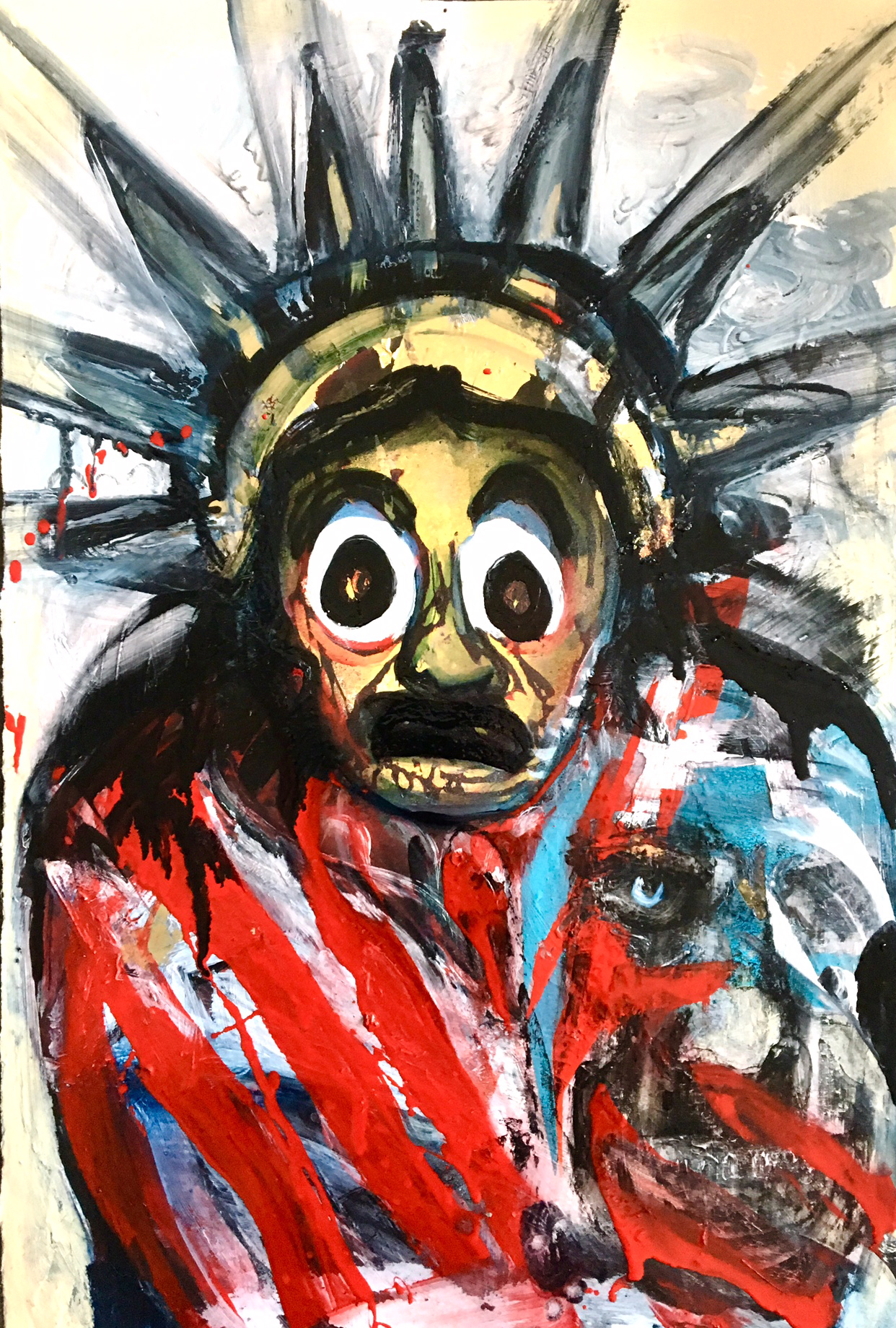 Oska Lappin: The first weekend after the inauguration of the current occupant of the White House, I was with friends and inevitably the discussion turned to politics and our fears of what could occur for the world at large. Someone said: ‘This discussion is probably akin to the talk in Germany around 1935.’ There was a group shudder and an unusual silence.

As a narrative-based self-expressionist, I begin by making a mental storyboard out of the saturation of imagery from films, books, real situations to overheard conversations and gossip ­— whatever stimulus I come into contact with. My mind seethes like a pressure cooker until it’s ready to explode and then I know it’s time to begin working. With the global political maelstrom that ensued in 2017, Scary Amerika, a title from a woodcut I had made several years before, became my immediate starting point.

The Idea by Frans Masereel is a story told in woodcuts about a man’s ‘Idea’ that takes the form of a naked woman free from corruption, delivered from the sky by a hand holding a white envelope.

Her nakedness causes social disorder and chaos. Masereel’s graphic storytelling informed my work from an early stage as I decided to work with a strong female icon at the heart of the narrative. After I made the woodcuts for the series I began to work over them. As I was listening to Lou Reed’s New York, the line ‘statue of bigotry’ came on, and my homage to Masereel was to use ‘Liberty’, a female-cartooned embodiment of La Liberté éclairant le monde, to tell a tale of a fallen ideal of a once-great symbol of freedom and ‘liberty for all’.

I feel well positioned in Britain, somewhere between the US and Europe, ready to transcribe human expression in all its forms into a visual language that says something, whether it’s funny and makes people laugh, or feel slightly unheimlich. Creating a feeling of unease is a key element in my work.

Multicultural UK is a society where humour is an essential undercurrent and has added an element to my work celebrating an island of Hogarth, The Sex Pistols, the ludicrous royal family, the brilliant writers, poets, scientists, music... I’m in my studio ready to tell it all.

Oska Lappin spent half her childhood on a hippy farm on the West Coast of the US and the second half with her artist father on the East Coast. She bought a one-way ticket to London in 1993 and has been in the UK ever since. www.oskalappin.co.uk