Danielle Barnhart and Iris Mahan, Women of Resistance: Poems for a New Feminism 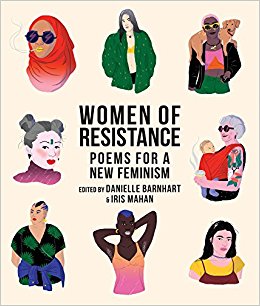 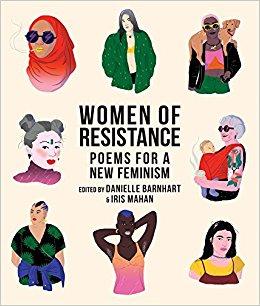 In one of the last poems in this book, entitled ‘To the woman on St. Nicholas Avenue whose thigh was a wilderness blooming’, Ellen Hagan celebrates a woman she saw who had tattoos of flowers and trees all up her leg. She speaks of how uplifting the sight of this ‘garden of a woman’ was, and the poem is infused with a sense of the bravery this random stranger had – to show the world how she wanted to look, and who she wanted to be. I felt like this poem summed up everything joyous and essential in this collection of ‘poems for a new feminism’.

This is not to say that all the poems in it are joyous, though. In the back cover plaudit, Eileen Myles tells the reader to ‘Pick up this glowing book as you’re crawling through the rubble [after the patriarch falls]’, and often the authors of the poems convey a definite sense of how difficult life can be and has been, now and throughout time – not just for women, but for everyone who suffers because of discrimination and prejudice.

Several of the poems are confusing: you occasionally get the sense that some things will never make any sense to anyone but their creator. But even when it feels like a bewildering dive into the depths of someone else’s mind, there’s still a depth to every line that reflects the title: ‘Women of Resistance’. The people who wrote these poems resist oppression with every line they write. ‘I want to believe / I’m a better woman now/ that I’m writing poems,’ Denice Frohman writes.

Many times, I came across lines or entire poems that were radiant with the joy of that resistance. There is a three-page poem by Lauren K Alleyne about the pantsuit as a feminist icon, calling it ‘the cape to every superheroine / wanting to kick in a glass ceiling.’ Kim Addonizio writes a poem called ‘To the Woman Crying Uncontrollably in the Next Stall’, in which she tells a stranger that if she ‘stood miserably on a beach seaweed clinging to your ankles paid good money for a bad haircut… if you swam across a river under rain… listen I love you joy is coming.’

But my favourite poem of all is the first one in the book, ‘a woman’s place’ by Denice Frohman, where she says that a woman becomes herself ‘the first time she speaks / without permission.’ She then entreats the reader to ‘say, beautiful / & point to the map of your body / say, brave / & wear your skin like a gown or a suit / say, hero / & cast yourself in the lead role.’