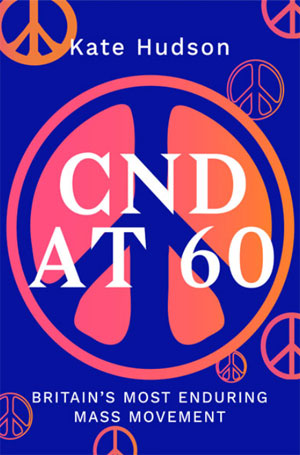 An extract from a new book marking CND’s 60th birthday 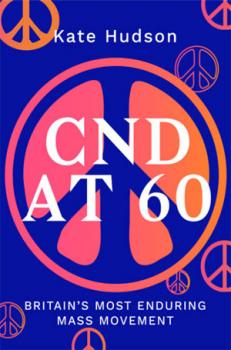 One of the key debates in CND from its inception was the role of ‘direct action’ and whether breaking the law was a permissible way of campaigning against nuclear weapons.

The first Aldermaston march in April 1958, which was organised by the Direct Action Committee (DAC) and supported by CND, really launched the new movement into the public eye and onto the political agenda. CND went on after the march to pursue a range of campaigning and lobbying activities, building local groups and organising meetings and events.

The DAC maintained its orientation towards civil disobedience, with a broader overall goal of changing society through peaceful means. Its principles, summed up by April Carter, who was a leading activist in the DAC, include a ‘belief in the need for non-violent action directed against weapons and bases designed for nuclear warfare, the need for personal commitment, and reliance on popular protest rather than on working through the established political process.’

The position of the CND leadership, on the other hand, can be summed up by a comment from canon John Collins, who was at that time CND’s chair: ‘It seemed to me that for CND as such to identify itself with illegalities would be to alienate its potential supporters, not only in the Labour movement but outside it, to whom the bulk of campaigners wished to address themselves.’

Even so, many in the ranks of CND’s local groups were more sympathetic. For the first couple of years, CND and direct action activities took place side by side, often with considerable overlap. The Thor missile bases were a particular focus for campaigning in those early years and both organisations were involved in activities at these bases. Events did from time to time highlight the differences in approach between the two organisations, however.

Neither condemn nor condone

Towards the end of 1958, DAC carried out an action at the Thor base at North Pickenham in Norfolk, attempting to enter the base. On the first day of the action, it was prevented from entering the base by workmen on the site and, according to Pat Arrowsmith, active in both CND and DAC, the protestors suffered physical attack at their hands while the police looked on. On the second day of the protest, the workers were absent but Pat was thrown into an icy pond by an RAF policeman! The episode was given widespread media attention.

One national daily newspaper, not understanding the different components of the movement, accused CND of sabotage. Canon Collins issued a statement dissociating CND from the action:

‘We aim to change public opinion and the policies of the political parties through the usual democratic channels... The National Campaign for Nuclear Disarmament is not in favour of civil disobedience or sabotage so long as reasonable opportunities exist for bringing democratic pressure on Parliament.’

Canon Collins’ statement provoked some anger in the movement, not least because the DAC had not been engaged in sabotage. At the next meeting of CND’s executive committee, it made the statement that in future it would not, ‘as far as possible, publicly repudiate nor formally associate itself with actions involving civil disobedience.’

“Schoenman’s idea was mass civil disobedience, intending to combine the direct action of DAC and the mass movement of CND”

Not long after this, at CND’s first annual conference in March 1959, Pat Arrowsmith put forward a resolution that CND should undertake civil disobedience. According to CND colleague Peggy Duff, it was likely that a majority of the conference would support the resolution. The executive committee strongly opposed the resolution and threatened to resign en masse if it was passed. Probably as a result of this threat, the resolution was defeated, but not overwhelmingly.

There was a danger though that the issue could be portrayed in an over-polarised way, which was undesirable given that activists shared the same aims, even if they sometimes differed on the appropriate methods. Hugh Brock [then Peace News editor], who was DAC representative on CND’s co-ordinating committee in 1959 ‘sometimes wondered whether the activities of the DAC were rocking the boat too much. He felt that some of their friends too often exaggerated the part they had played, for example, in the first Aldermaston March, which could never have been as successful as it was without the backing of the Campaign.’

In reality, a fairly co-operative approach existed, for example when CND and the DAC decided to co-operate over a demonstration at the Thor missile base at Harrington, Northamptonshire, in January 1960. The DAC planned a march and a sit-down at the base. CND organised a march led by canon Collins ‘in sympathy with civil disobedience but not supportive’ and that would pass the base but not engage in the sit-down. The combined event was a success and seemed a good formula for future co-operation.

Generally speaking, there was not a rigid demarcation over the focus of actions; CND also conducted a range of actions at bases, but without direct action. In 1959, CND had demonstrated at the rocket bases in Yorkshire and at RAF Brize Norton, amongst others. But of course CND’s great strength was that it sought to involve many people in its campaigning and to get the message out far and wide amongst the population.

A major CND campaign in September 1959, was entitled the ‘Let Britain Lead’ week. It sounds a bit odd nowadays, but it was encouraging Britain to take the lead on nuclear disarmament. A sense of the scale of the campaign can be grasped by the fact that in one week of campaigning a million leaflets were given out all over Britain, 50 national speakers toured the country, there were marches and rallies in every region and the CND Architects’ Group produced 18 exhibitions for public display. As a result, 20 new local groups were formed.

Later that year, however, a new initiative was launched, which led to sharp conflict within CND’s leadership – between its chair, canon Collins, and its president, Bertrand Russell. The trouble began as Russell started to articulate and act upon the frustrations of those in the movement who found the CND leadership’s approach too conventional.

In the middle of 1960, Russell was visited by a young American called Ralph Schoenman, who proposed a new campaigning approach: neither the mass marches and legal protests of CND, nor the activities of the DAC, which in Russell’s words, ‘were too often concerned with individual testimony by way of salving individual consciences.’ Schoenman’s idea was mass civil disobedience, intending to combine the direct action of DAC and the mass movement of CND. Russell took up the idea, and the Committee of 100 was formed.

The Committee of 100’s first demonstration took place in February 1961, outside the ministry of defence headquarters, to protest the arrival of the US Polaris depot ship at Holy Loch in Scotland. Around 4,000 people sat down in protest, but there were no arrests. The DAC also took direct action at Holy Loch itself at the same time, and the events gained widespread public attention. [The first Polaris missiles each carried a 600kt nuclear warhead; a Polaris submarine carried 16 Polaris nuclear missiles. Holy Loch remained a US nuclear missile submarine base until 1991.]

In March 1961, CND’s annual conference reaffirmed its commitment to legal methods, but it also congratulated the DAC and Committee of 100 on their demonstrations. The conference stated that the three different forms of protest should be seen as ‘three techniques in a united attack on preparations for nuclear war.’ In other words, it was recognised that these diverse methods were all valid parts of the process of campaigning against nuclear weapons. This remains CND’s position today.