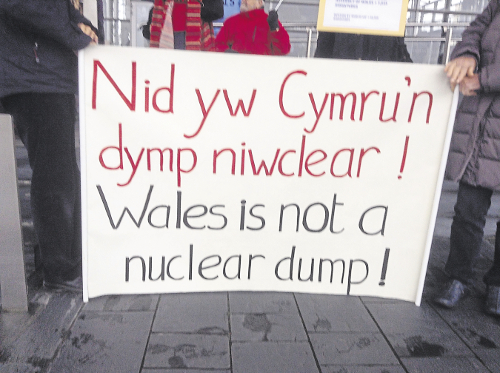 Tim Deere-Jones has created quite a stir by researching a scheme by French power company EDF to dredge up more than 300,000 tonnes of mud from the Bristol Channel and dump it off Cardiff Bay.

Tim’s research has generated questions on the floor of the Welsh assembly; 7,171 signatures on a Welsh assembly e-petition; over 52,000 signatures on a ‘Sum of Us’ online petition; discussion at the review conference of the London Dumping Convention (the international institution that oversees the prohibition on disposing of nuclear waste at sea); presentations to Vale of Glamorgan council and the Wales forum of the Nuclear Free Local Authorities (NFLA); plus substantial media coverage.

John Thomas, leader of Vale of Glamorgan council, has called for an urgent meeting with Natural Resources Wales, who approved the dredging licence despite admitting that they have no staff with any nuclear experience.

There is fear of offshore as well as onshore contamination, according to Tim, who cites studies of North Wales tidal surges having revealed onshore mud and sand deposits heavily contaminated with radioactivity from Sellafield.

Calling for a suspension to the dredging, assembly members Neil McEvoy and Simon Thomas believe the proposal is likely to result in a full-scale debate involving all Welsh assembly members.