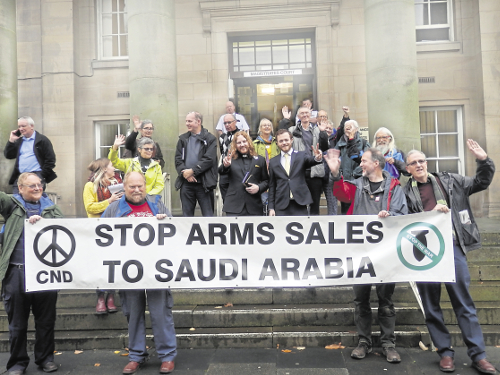 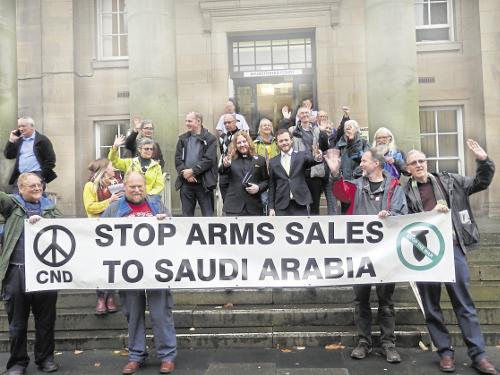 Dan Woodhouse and Sam Walton (centre) with supporters outside Burnley magistrates court after the verdict on 26 October. Photo: Andrea Needham

On 26 October, Burnley magistrates court acquitted Ploughshares activists Sam Walton and Dan Woodhouse of criminal damage after they admitted breaking into a BAE Systems plant to use household hammers on military jets.

Poor old British Aerospace. Not only were the first group of people to break in to their Warton site in Lancashire to disarm a warplane acquitted, now the second lot have also been found not guilty. It’s curious how difficult it appears to be to convict people for acting peacefully to prevent war crimes.

The first disarmament action took place in January 1996, when a group of women (myself included) broke in and disarmed a Hawk warplane being sold to Indonesia for use in their brutal war on the people of East Timor. Six months later, all of us were acquitted by a jury, having made the defence that we were simply using reasonable force to prevent crime, as allowed in British law.

The second action took place exactly 21 years later (the date was a happy coincidence), when Sam Walton and Dan Woodhouse broke in with the intention of disarming Typhoon, Tornado and Hawk warplanes which BAE Systems is selling to Saudi Arabia.

As we all know, Saudi Arabia is pursuing a brutal war in Yemen, which has led to thousands of civilian deaths. The almost total destruction of the infrastructure of the country has caused the biggest outbreak of cholera in recorded history, and millions of people are on the verge of starvation. Yet BAE continues to sell warplanes, other British companies sell bombs, and the British government falls over itself to appease the fragile Saudi ego, touchy as the rulers are about accusations of war crimes.

Sam – who works for Quaker Peace and Social Witness – and Dan, a Methodist minister from Leeds, had both spent years taking action to try to stop the sale of arms to Saudi Arabia. Major human rights organisations including Amnesty International, Oxfam and Human Rights Watch have called for the sales to stop, but nothing has changed. The British government is determined to allow these sales, whatever the cost to the people of Yemen. In those circumstances, as Sam and Dan explained to Burnley magistrates court at the end of October, there was nothing else they could do but try to disarm the weapons themselves.

I was particularly struck by one piece of Sam’s evidence, where he talked about a picture from Human Rights Watch which he’d seen on Twitter. It was of a fragment of a Paveway IV missile, found in the ruins of a Yemeni food store. The serial number on the casing was visible, showing that the bomb was made by the arms manufacturer Raytheon in Glenrothes, Scotland, after the war against Yemen started. In other words, it was sold in the full knowledge that it would almost certainly be used in this war.

Sam said that this picture made him realise that Britain was more complicit than he’d realised, and that he had to take action. He also recounted the words of then-foreign secretary Philip Hammond in March 2015. Hammond told the Daily Telegraph that Britain would support the Saudi attack on Yemeni rebels ‘in every practical way short of engaging in combat’. Clearly the government is taking that promise very seriously and believes that the main way they can support the Saudi regime is to sell it vast quantities of weapons, no tricky questions about human rights asked.

Had they reached the planes, Sam and Dan would probably have been charged with millions of pounds worth of damage. As it was, they were caught just feet from the planes as they tried to break through a door into the hangar, and were charged with only £1,000 of damage, not enough to allow them a jury trial. Unlike us, they were not charged with conspiracy to cause damage, which again would have allowed a jury trial. Clearly the CPS has learnt after our case not to trust a jury to do the right thing when presented with evidence of state-sponsored war crimes.

Listening to all the evidence, it was clear the two men had a strong defence. They were using three separate defences – the Criminal Damage Act (which allows you to act to protect property); the Criminal Law Act (the use of reasonable force to prevent crime) and the common law defence of ‘necessity’. Sam was representing himself while Dan was represented by a barrister, who put all the legal arguments deftly and clearly. Both gave compelling evidence of what else they’d done to try to stop the sales, and how they felt they needed to act immediately to prevent more suffering in Yemen.

The prosecutor, meanwhile, appeared to believe the case was open and shut, and that he could get a conviction without too much effort – after all, hadn’t these two men been caught in the act, and fully admitted their intentions? The prosecutor’s main focus was on the imminence of the need to act (a key requirement of the defences used). He put to both Sam and Dan that they didn’t know exactly when any of the planes at Warton that night would be leaving for Saudi Arabia, therefore they couldn’t show that they needed to act immediately. Clearly, that was nonsense – the fact that they didn’t know exactly when the planes would leave if anything reinforced their contention that they had to act immediately, before it was too late.

To contest the point about immediacy, Dan’s barrister referenced a case where Iraqis fleeing Saddam Hussein’s Iraq had hijacked a plane in order to reach the UK. They were convicted but cleared on appeal, with the court ruling that the judge had wrongly prevented the jury considering their defence of ‘duress of circumstances’. In his summing up, lord justice Rose said: ‘If Anne Frank had stolen a car to escape from Amsterdam and had been charged with theft, the tenets of English law would not have denied her the defence of duress of circumstances on the ground that she should have awaited the Gestapo’s knock at the door.’

As we all know, however, having a strong defence in law is not always enough to ensure an acquittal, particularly when your case is being heard by a district judge rather than a jury. Of course, we were all hoping for an acquittal – how could the judge convict them of simply trying to save lives? – but few of us were confident that would be the outcome.

When he came in to read his verdict, the judge commended the behaviour of those of us who had been in court throughout the trial, and warned us that we should not make any reaction to his verdict while the court was still in session. We looked at each other, eyebrows raised: did that suggest a ‘not guilty’? The judge went on to say that his verdict would not set a precedent, and we looked at each other again, our eyebrows raised even further. Surely that meant....

And, yes, it did. The judge acquitted both men on the first plank of their defence (protecting property) and therefore didn’t go into the other defences. He said Sam and Dan were ‘impressive and eloquent’ and were ‘honest throughout their evidence’.

One of the key disputes between the defence and the prosecution had been the evidence of two security guards as to what the two had said when they were discovered. One of the guards recalled one of them saying they had come to ‘attack’ the planes; the other claimed they’d told him they wanted to ‘cause as much damage as possible’. The prosecutor made much out of this: they had not come to do the minimum damage necessary to put the planes out of action, as they claimed, but were just there on some kind of wanton trashing mission. Both men rejected the evidence of the guards, explaining that they’d rehearsed their words, which were that they had come to disarm the planes. Notably, the judge said that their version was ‘more likely to be accurate’ than that of the guards.

The judge concluded by saying that ‘I remind myself at all times that it is for the prosecution to satisfy me so that I am sure that the defence does not apply. I am not so satisfied.... I find the defendants not guilty’.

The prosecutor may have been feeling a little sheepish at this point. As for the rest of us, we held our breath until the judge had disappeared through the door behind the bench, then a great cheering and clapping broke out. Sam and Dan had been vindicated; justice had been done.

The previous day and some 200 miles away in London, the then-defence secretary Michael Fallon complained to the house of commons defence select committee that criticism of Saudi Arabia was ‘unhelpful’ at a time when the government was trying to persuade the Saudis to sign a £4bn deal for another 48 Typhoon warplanes. ‘We need to do everything possible to encourage Saudi to commit to batch two order [sic]’, he said.

That’s right: we need to do everything possible to persuade an autocratic, human-rights-abusing country, in the middle of a brutal war against the people of a neighbouring country, to buy more of our weapons so they can continue to pursue that war until there’s not a building left standing, not a child left untraumatised, not a family whose life has not been torn apart by death and destruction rained down on them from above by British planes carrying British bombs.

For my part, I’m glad to be on the side of the disarmers.

This was a brave and necessary action which exposed the moral vacuum at the heart of the British government. And as for BAE Warton? Well, now it’s
Disarmers 2 – 0 BAE. Who’s up for a bit of disarming?

Sam and Dan’s lawyers were Blinne Ní Ghrálaigh of Matrix Chambers and Mike Schwarz of Bindmans.