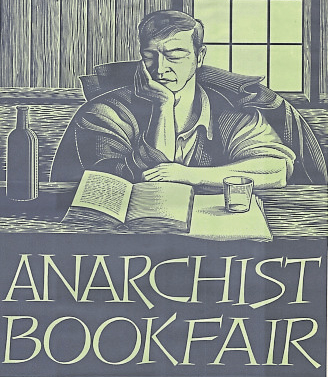 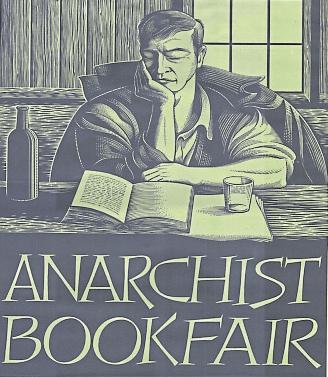 The origins of the Anarchist Bookfair are briefly recounted here, and the issues concerning free speech are the subject of this issue's editorial here.]

There have been a number of demands that the London Anarchist Bookfair Collective put out a statement on the events at this year’s Bookfair. Since we started drafting one there have inevitably been a range of statements, open letters etc. Elsewhere we will set out where we think this leaves the Bookfair collective, the Bookfair and the wider movement. Here we will try and set out some sort of position on the events of the day. It’s probably useful to keep the two separate.

Before we start, we want people to remember there were a huge number of positive things about the day; it felt more diverse, there were a lot of people who had not been before, there were some excellent outward looking meetings, the Swiss comrades raised more than £700 for G20 defendants, the Rebel Riot tour went down a storm and they’ve secured help and funding to set up a social centre in Myanmar, a comrade who came over from Hong Kong is going back to set up a bookfair there, as is another from Bulgaria we hope, and there were some great books too!

What people are expecting us to make a statement about are two incidents and some leaflets. Like many, many other groups we don’t all think the same but have tried to come to some consensus. From the demands being ‘made’ of us we know we won’t satisfy everybody. In fact, we may alienate a range of people, and we may have people who presently are trying not to take sides disagreeing with us as well. All we can say to everyone is: ‘These are our thoughts’.

There were some leaflets being handed out against the proposed changes to the Gender Recognition Act. We are all unhappy about the contents of the leaflets we have seen. One is clearly meant only to provoke, the other fails to even acknowledge the real fears and discrimination that many trans people face in everyday life and, by failing to do so, itself becomes provocative and therefore offensive. We had not seen the leaflets before the problems started and most of us did not get to see the contents until the end of the day.

As anarchists, we feel ‘banning’ and ‘no platforming’ are actions that should only be used as extreme solutions and, while the leaflet did cause offence and hurt, we will only remove literature or people from the Bookfair in extreme circumstances and not just because we disagree with it or them, even if they do cause offence.

"We see worrying tendencies on both sides to ban, oppress and win the argument by force."

As the Bookfair collective we have been working most of our lives to oppose oppression and we see worrying tendencies on both sides of this debate to ban, oppress and win the argument by force. We know people who feel strongly about this; who feel deeply hurt; and who feel angry. We see the contradictions, we see the splitting of our movement, and we see and feel the pain caused. Unfortunately we don’t have the answers but we are prepared to be part of any group that wants to look for a less oppressive way to deal with this debate within our movement.

We are also aware that views and attitudes vary widely. People who disagree strongly with the leaflets’ contents do not all think it’s useful to call the people distributing them fascists, or that anyone failing to condemn them should be attacked. People in our movement have a range of different views about gender, women’s spaces and so on. People who step in to stop a woman being mobbed don’t necessarily share her views or even claim understanding of all the issues. No one voice speaks for everyone on either side.

The jumping to confrontation, the retreat into ‘No debate’ only hardens positions, poisons political and personal relationships and makes the possibility of any sort of resolution less possible. We don’t see any winners emerging out of this toxicity.

Let’s get one thing straight. We did not step in to support people promoting transphobic hate speech. We saw two women (who had been handing out leaflets) being attacked by a group of people and separated them from the group. A member of the collective was hit by the people handing out the leaflets while trying to move them away from the stalls and lifts. The two women left the venue.

The woman who was later mobbed by up to about 30 people did not hand out the leaflets or have anything to do with their production or distribution – she simply said that they had the right to distribute them. For expressing this view, she was mobbed by a crowd of people some of whom, had we not stepped in, appeared bent on physically attacking her.

We and other stall holders stepped in to prevent this from happening. If any individual within our movement is threatened with physical assault at the Bookfair we always try to do what we can to protect that person, and have done so (sadly too often) at previous Bookfairs over a number of different strongly felt issues, regardless of whether we personally share their views.

We have been accused of ‘protecting a fascist’ and of being transphobic ourselves. All of us in the collective have physically confronted fascists on the streets, at meetings and in print, and we are baffled and upset by these accusations. Accusing a person of being a fascist because you don’t like their views is dishonest and dangerous. We are not going to apologise for protecting someone being mobbed by a group of up to about 30 people, and, along with others, preventing an ugly situation from deteriorating further.

Obviously a lot of people are going to disagree with this, but anyone who seriously thinks that up to about 30 people shouting and threatening one woman, and in the process intimidating disabled comrades and children, was a ‘beautiful moment of direct action’ should consider taking a look at themselves and their politics.

Finally, to those who decided to smash and set off the fire alarm, and to anyone who thought it was clever – have you thought about the effect it had on the crêche and older kids’ space, the numerous meetings taking place at the time, or relations with the venue? A number of children having to be led out of the older kids space were crying and talking about Grenfell. They thought it was a real fire and were really scared. This action definitely didn’t make it a safe space for them.

We are unsure how this debate within our movement (and beyond) will work itself out, as there is a wide range of strongly-held views. What we are sure of is that next year there are people who would want us to ban those sharing the views of the leafleteers or those who stickered the loos, others who would want us to ban people who were in the group of up to about 30 or those who set off the fire alarm.

We are not prepared to ban any of these people, and, while people think the way to resolve their differences is to disrupt and shut down meetings, like the Syria meeting last year, or the whole Bookfair this year, by shouting at and fighting each other, we haven’t the appetite or the energy to organise next year’s Bookfair.

More positively, and perhaps unsurprisingly, we have had contacts from a range of people who do see the need for debate and discussion on the issues and the events. We don’t think our collective is the right facilitator, but are prepared to work with anyone who, like us, would like to look at ways we work these (strongly-felt) disagreements within our movement out face-to-face. If we don’t, the only winners will be capitalism and the state.

(Please note: While others may want to continue this discussion online, we won’t be making any further comments.)

Note: the headlines to these two articles have been added by PN. This statement can be downloaded from the bookfair website: www.anarchistbookfair.org.uk