Jill Liddington, Vanishing for the Vote: Suffrage, citizenship and the battle for the census 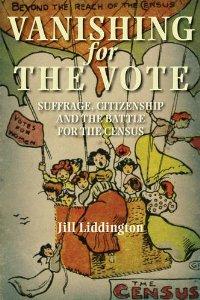 Until recently the 1911 Census Boycott was seen as another colourful Suffragette tactic in the ongoing campaign for women's suffrage. But Vanishing for the Vote reveals it to have been an episode of high drama – personal and political, private and public. In proposing that women boycott the census, Suffragettes intensified the 'battle for democracy', asking, Which side are you on: the paternalistic state, or the grassroots campaign for citizenship?

This was a near-perfect example of civil disobedience 'propaganda by deed', both inspiring and offering much food for thought for activists today.

The context was the national coalition government led by Herbert Asquith (implacably opposed to women's suffrage) in which David Lloyd George was Chancellor – his priority was his National Insurance bill, legislating to tackle poverty and a first step towards a welfare state.

The census was pitched as a crucial scientific exercise to quantify and reveal the demographics of poverty and need. Thus the Suffragettes' boycott of it was an attempt to disrupt the government's project of welfare democracy in the service of campaigning for full citizenship.

But the battle was not just on paper. For many women the questions about childbearing and child mortality, asked of disenfranchised people, made this a battle over women's bodies. Heads of households were usually men, this located the struggle deep in the 'private-domestic' sphere. For working class women there was yet another tension: to stand with their class in the fight for economic freedom, or with their sex in the fight for gender equality?

Academically credible but still highly readable, _Vanishing for the Vote_ opens by introducing key characters, then sets the context of the wider political landscape, and lastly focuses on the events of census night. The first part gives a sense of the colourful diversity of the suffrage movement: a picture immediately recognisable to contemporary climate change activists! The last part relates daring stories of evasion of the census on the night itself: women getting together to hide in other people's houses, or walk around all night, risking fines and imprisonment.

It's in the second part that the political power of the Suffragettes' action becomes clear, but also where the action's deficits come to light. In the end participation was restricted to predominantly 'financially self-confident', ie. wealthier, women. This, and a failure to address the dilemmas and needs of working class women, ultimately undermined the effectiveness of the boycott, providing a lesson in inclusivity for activists today. Would a census resistance campaign that considered poor women's priorities have been run differently.

Inspiring and thought-provoking, this is a must-read for activists and organisers.