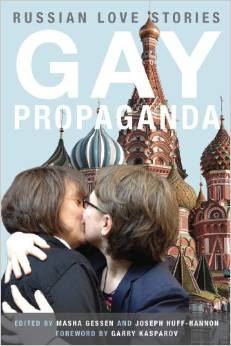 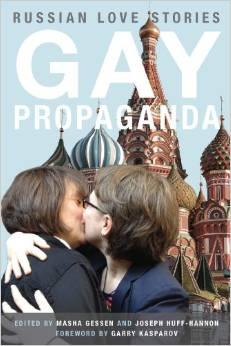 Publication of this book was rushed to coincide with the Sochi winter Olympics, and it shows. It shows, because – and the editors admit this – the spectrum of experiences is limited to mostly well-off Russian gays and lesbians, mostly couples with higher education and the ability to travel abroad. The publication of the book is a response to a wave of state-sponsored homophobia in Russia, culminating in a bill banning 'propaganda of non-traditional sexual relations' - often narrowly interpreted as banning propaganda of homosexuality, but in fact covering a much broader spectrum of non-patriarchal sexual relations.

Gay Propaganda brings together 'Russian love stories' - stories of gays and lesbians (plus one trans*) - and their life in Russia, before and after the passing of the law. It is full of stories of the daily struggle against homophobia, of keeping sane in an insane environment, of hate and love. It is also full of stories of how state-sponsored homophobia, fuelling homophobic violence, creates an atmosphere of fear and paranoia, and the power of people to overcome their fears and live their lives. However, it also shows that homophobia does not reach everywhere – there are also mothers, fathers, and friends who have little problems with their lgbt offspring or friends, creating islands of sanity in a sea of homophobia.

Who is this book for? As Masha Gessen writes in her part of the introduction: '[T]his would be a samizdat project, the telling of stories for a small audience that needed it'. This audience includes lgbt people all the world over – but most likely in the countries of the former Soviet Union – that live in an environment of state-sponsored homophobia. Here, the book can provide hope through the sharing of stories and experiences.

However, I still have some issues with the book, which lead me back to its limitations.

The book focuses on gay (and lesbian) lives and identities, extrapolating from lgbt identity politics as we know it in the West. These get increasing challenged by queer activists, who question the normalisation of lgbt identities, and their universal applicability to a broader range of 'non-traditional sexual relations' or gender identities. Little of this is visible in the book.

Given these limitations, to me the title of the book – gay propaganda – takes on a second, probably unintended, meaning: propaganda for the normalisation of gay (and lesbian) identities along heterosexual models.

[Explanatory note added by editors: According to Sam Killermann: 'Trans* is an umbrella term that refers to all of the identities within the gender identity spectrum. There’s a ton of diversity there, but we often group them all together (eg when we say “trans* issues”). Trans (without the asterisk) is best applied to trans men and trans women, while the asterisk makes special note in an effort to include all non-cisgender gender identities, including transgender, transsexual, transvestite, genderqueer, genderfluid, non-binary, genderfuck, genderless, agender, non-gendered, third gender, two-spirit, bigender, and trans man and trans woman.']_