Richard Seymour: Against Austerity: How We Can Fix The Crisis They Made 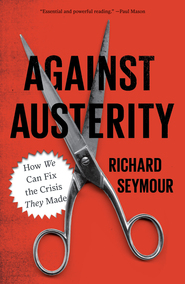 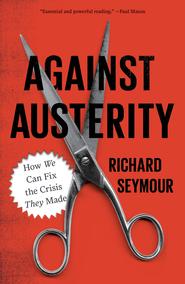 Richard Seymour, founder of the popular Lenin’s Tomb blog and regular contributor to the Guardian, is one of the smartest, sharpest Leftist intellectuals working in the UK today. After writing books critiquing liberal imperialism, David Cameron and Christopher Hitchens, he has now turned his attention to the 2008 financial crisis and the British government’s austerity agenda.

Seymour’s central concern is that the Left has ‘nothing to show’ for itself after four years of a coalition government committed to cuts on a scale not seen since the Great Depression of the 1930s. ‘I think our analysis of what austerity is, how it works, and what strategies can best stop it, has been badly wrong’, he argues. For Seymour ‘austerity is a class strategy’, the significance and scope of which should not be underestimated. It is not simply about spending cuts: ‘It is a shift in the entire civilizational edifice of capitalism.’

The bulk of the book is made up of three chapters titled ‘Class’, ‘State’ and ‘Ideology’, dense with demanding Marxist political theory and analysis (Seymour repeatedly cites the writings of Antonio Gramsci, Nicos Poulantzas and Leo Panitch). I must admit I had a lot of difficulty following many of the arguments set out in these sections, often forgetting the original point by the time I got to the end of the section I was reading. Seymour himself admits the book shouldn’t be seen as one of the many that aim to debunk austerity. Those looking for a more straightforward, accessible take on the subject should turn to Owen Jones, the economist Ha-Joon Chang or Jim Stanford, author of Economics for Everyone: A Short Guide to the Economics of Capitalism (reviewed in PN 2504-05).

The book’s concluding chapter on strategy includes much of interest for progressive activists. ‘The Left has to stop thinking in terms of “the next big thing”’, Seymour argues, and instead start to think long-term, ‘in the same way as the ruling class does.’ This far-sighted strategy must be radical, offensive rather than defensive, militant rather than solely parliamentary, and be prepared to employ civil disobedience in pursuit of its goals.

Explicitly forward-thinking in outlook, Seymour believes the model for resistance should be that of a social movement based on direct democracy, shades of which have been seen in the Spanish indignados, Occupy and the recent feminist insurgency. In particular, he highlights the 2012 Quebec student revolt as an example of a successful campaign which those resisting austerity should try to emulate.

Challenging – both to read and in its argument – Against Austerity is a timely book that will appeal to informed, intellectually-minded activists.