Mike Marqusee, The Price of Experience: Writings on Living with Cancer 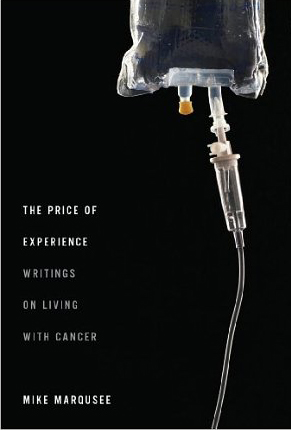 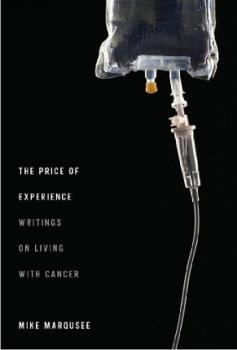 ‘When I was diagnosed with multiple myeloma in 2007, I vowed to friends I would not add to the surfeit of cancer confessionals’, Mike Marqusee writes in his introduction to this collection of essays. It was, however, a promise he ‘should have known’ he wouldn’t keep. And thank goodness he didn’t, because this is no ordinary account of living with cancer, and is probably the finest writing I’ve ever come across on the subject.

For Marqusee isn’t particularly interested in telling us about the progress of his disease as most writers with cancer do. As a political writer, he instead focusses his concerns on what it is to live with cancer in 21st century Britain, against a backdrop of NHS privatisation and the role of Big Pharma.

One of the most important themes is the importance of free healthcare. Marqusee is treated at St Bartholomew’s Hospital in London (commonly known as Bart’s), a hospital I know well as my sister trained there, and my family and friends have been patients there. It’s a brilliant hospital, and I was pleased to learn that the quality of care – though increasingly under threat – is still so high.

In the opening essay, ‘The Hospital’s Story’ (2009), Marqusee reflects how it nearly closed in the 1990s as part of Conservative cuts, and how its survival was ensured by a major campaign by Londoners. Now the financial demands of the private finance initiative (where hospital trusts are loaned money for building, that then ties them into long-term costly repayments that do not even guarantee ownership of the property at the end) is threatening the ability of the hospital’s trust to maintain service quality.

In ‘False Economies’ (2011) and ‘The Complicated Art of Surviving’ (2012), he reflects on how the coalition government’s cuts and healthcare bill have led to an increased pressure on budgets, the spectre of private companies taking over hospital trusts and the danger that the UK might follow down the path of US-style healthcare that is only affordable to those who can pay.

Marqusee’s illness is so complex that he would not have survived this long without his free treatment at Bart’s. Consequently, for him, survival has a ‘political dimension’, and being a cancer patient means being involved in a political struggle against the ‘ideology of market imperatives’.

It’s a struggle the writer commits to, refusing to play the part of the ‘benign’ dying patient instead of channelling his anger at the injustice of healthcare changes, his hatred for exploiters ‘sharper and fiercer than ever’.

He also rips into the notion that cancer patients are brave, beating their disease with their strength and will-power.

My friend Pip, who died of secondary breast cancer in 2010, often said the same thing to me. She would have appreciated his analysis that cancer can’t be simplified, that it is a social and environmental phenomenon requiring a sophisticated response, and that those people who chose to live with, rather than fight it, or those whose disease progresses so quickly they can’t fight it, are not weak for doing so.

He is also excellent on the importance of being honest with friends and relatives who have the disease, not ducking difficult conversations, and remembering that ‘listening is nowhere near as uncomfortable as living with [cancer]’

The final big issue tackled is Big Pharma’s role in controlling the market for treatment.

In ‘Held Hostage by Big Pharma’ (2013), Marqusee discusses the costs of the drug Revlimid, a late therapy for multiple myelomas. Given that he will be dependent on it for a while, he is shocked to discover that a single 20-day cycle of the lowest dose of 5mg costs the NHS £3,570, a cost that rises with the dosage.

This high price is maintained by the company responsible for the drug, Celgene, because, they say they need the money for research and development. In fact, the money goes on marketing, PR and profits; and the reason the drug costs so much is that Celgene has an exclusive license to produce it, thereby maintaining a monopoly that suits its purposes well.

I leave you with my favourite line, taken from ‘Surprisingly I’m Still Alive (An Open Letter to Friends)’ (2013) – ‘One of the reasons I’m glad to be alive is that I can have a go at these bastards.’ Me, too.