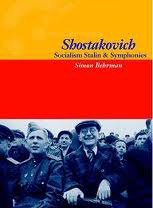 The Russian composer Dmitri Shostakovich – considered by some to have been the greatest symphonist of the 20th century – lived through the October Revolution, the age of Stalin, and a good proportion of the post-Stalin Soviet years; he’s a composer who can’t be ignored by any activist interested in the cultural aspects of 20th century politics.

Music’s ‘meaning’, beyond the abstract and physical pleasure of the sounds, can relate to the political situation a composer is in, as well as to the cultural background in terms of what ideas and emotions certain sorts of sounds had come to mean or be associated with.

The same applies to the listener – with the added layer of complexity that the listener might not know or understand, or agree with, the composer’s own take on their political situation.

And when, at one further stage removed, we are reading a politically-committed writer’s analysis of music composed in a highly political context, then we have to also make allowances for the author’s own interest in using their work as a way of spreading their own political ideology.

Simon Behrman’s book is a good example of all these dilemmas at once, and should prove fascinating for those who see culture as being a key part of social change – as well as a key part of what we want to change the world for – and who want to understand how culture and revolution can interact.

Perhaps the book’s greatest value, for those not sharing the author’s view of the way that much of the debate around Shostakovich’s work has been damaged by other authors’ failure to correctly analyse the political development of post-revolutionary Russia, is that it provides an informed and concise starting point for an exploration of many of these other works.

Anyone following up even a few of the notes and references in this book will surely find themselves engrossed in the story of one of the most fascinatingly enigmatic artists of the last 100 years. And any book that encourages more people to wallow in the glorious soundscapes of Dmitri Shostakovich is surely an aid to the sort of revolution worth struggling for.