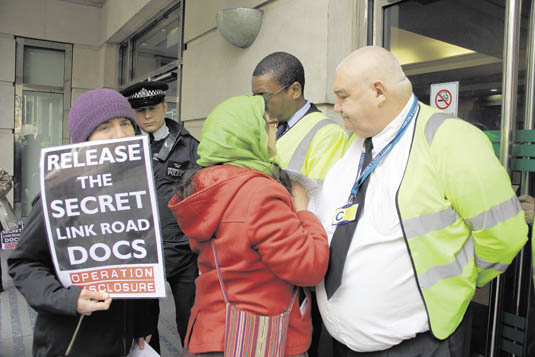 11 May 2013 Feature by Gabriel Carlyle
PN co-editor tummy-to-tummy with the forces of the State Photo: Marta Lefler

In the unlikely event that anyone were to ask where I was when I heard that Margaret Thatcher had died, I’ll be able to say that I was attempting to get into the department for transport (DfT) to search for secret documents.

Specifically, I was at their London HQ for ‘Operation Disclosure’: a two-day attempt by the anti-road group Combe Haven Defenders to find and distribute the DfT’s secret recommendations about the £100m Bexhill-Hastings Link Road, the ‘first and the worst’ of over 190 road projects planned across England and Wales (see PN 2551).

We shamelessly stole the idea of the ‘Document Search’ from US activist Daniel Hunter, who successfully used the tactic campaigning against mega-casinos (see review of Daniel’s Strategy and Soul in PN 2556). 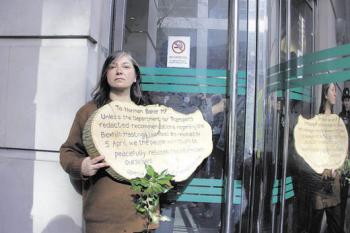 Our thinking was simple

The DfT had been highly critical of the link road plan, assessing it as ‘low or medium value for money’ – and therefore not a project that it would normally fund.

Nonetheless, the public were being denied the right to see what the DfT’s civil servants had recommended about the use of public money to fund the road.

If we could force this information into the public domain – or make the issue sufficiently embarrassing – then we might be able to do some political damage to the scheme.

The redacted versions of the documents – obtained by other campaigners using the Freedom of Information Act (FoIA) – had been available for the best part of a year, but little had been done with them.

So for one month we did everything we could to try to make the DfT’s secrecy an issue: delivering an ultimatum to the department’s head office written on a cross-section of a felled tree; braving sub-zero temperatures to ‘blow the whistle on the road’ outside the DfT’s Information Rights Unit; sending a cake to undersecretary of state for transport Norman Baker, decorated with a ‘traffic jam diorama’ in sugar icing; as well as chasing the mainstream media’s transport correspondents.

At the same time we mobilised over 35 people to take part in the Document Search itself.

Our analysis was confirmed when a senior source at the DfT confirmed to us (off the record) that the DfT had opposed the project, but was being leant on by George Osborne’s treasury department.

Five days before our Document Search, the DfT finally signed-off on the £57m of central government funding that East Sussex county council needed to proceed with the link road. All the more reason, we argued, to expose the political nature of the decision.

As a dozen of us stood stood shivering at the assembly point on Day One, my greatest fear was that it would be grim experience for the participants: that we’d simply be locked out of the building and ignored by the media.

Large numbers of police and security were on hand to prevent us from getting in, but for two days we became the talk of the DfT canteen.

Document Searchers quizzed Norman Baker on his way into the building – the resulting footage leading to the creation of a clever parody of his recent pop single – and PN’s indomitable (but not over-tall) co-editor Emily Johns was arrested by Britain’s tallest (7ft 2in) policeman.

Regional media carried the story, forcing county council leader Peter Jones – locally, the driving force behind the project – to make the damaging claim that he had never seen the redacted documents which rubbish the economic benefits he has alleged the link road would bring.

We learned that the utility of FoIA requests can be greatly enhanced if you’re prepared to step outside the normal procedural channels.

And I knew that we’d got something right when, 15 hours in, one of the security guards – a scowling bald Liverpudlian named Geoff – came over to tell us that he wished he was on our side: ‘You’re having more fun.’

Gabriel Carlyle is a member of Combe Haven Defenders.

This year’s Earth First! Summer Gathering (7-11 August) will be held near the Bexhill-Hastings Link Road:
www.tinyurl.com/peacenews870