Ken Macleod, The Human front plus... 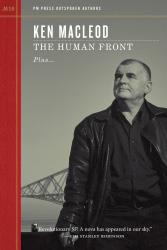 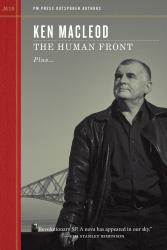 ‘What if something that didn’t happen had happened differently?’ is the tricksy question at the heart of Scottish Trotskyist Ken Macleod’s 2001 sci-fi novella The Human Front, re-printed here alongside two short essays and an interview with the author.

Like the shark in Jaws, the non-event in question is not revealed immediately, but its consequences are on display from page one.

It is 1963, and our narrator John Matheson – then a young boy living on the Isle of Lewis – hears Stalin’s death announced on the radio. The former dictator has just been killed, shot in the back whilst fleeing from US soldiers.

Moscow, we learn, was destroyed by atomic bombing in 1949 (‘Operation Dropshot’) following the arrival of on the scene of a new Advanced High Altitude Bomber – a circular machine powered by a mysterious ‘anti-gravity engine’. When one of the bombers crash-lands at the local NATO base, our protagonist is shocked to discover that the craft was flown by tiny child-like figures....

Stalin survived the destruction of Moscow to become a guerilla leader, and the Chinese revolution still took place, but, without a Chinese or Soviet nuclear deterrent to constrain them, the West has been free to use its nuclear weapons to defend its imperial possessions (during an argument between the narrator and his father we learn that Magnitogorsk, Dien Bien Phu, Belgrade and Kinshasa have all met similar fates to Moscow).

Consequently, de-colonisation — and all its knock-on consequences — never happened.

On the other hand, without the divisions caused by the Sino-Soviet split, the Communist movement has emerged to lead a unified, militant global uprising (‘the human front’) against Western imperialism. Or, as Macleod himself puts it in one of the accompanying essays: ‘There’s no Vietnam War in this world – instead, the world becomes Vietnam.’

Following an encounter with a charismatic Argentinian orator named Ernesto Lynch (google him!) our protagonist is converted to the cause, starting him down a path that leads from graffiti (‘Free Dubchek’) to blowing up a railway bridge with a band of partisans and wreaking havoc with a captured tank. However it’s only when he downs one of the saucer-shaped aircraft that things really start to get weird....

As should already be apparent, much of the fun stems from Macleod’s savvy left-wing stance on 20th century politics and the ways in which his alternate history intersects with our own. For example, at one point Matheson informs us ‘News items that raised questions about the war’s conduct and its domestic repercussions were few: the Pauling trial... the occasional allusion to a speech by Foot in the Commons or Wedgwood Benn in the Lords.’

Likewise, Operation Dropshot was the codename of a real US contingency plan for nuclear war against the Soviet Union (prepared in 1949), and Western powers really did consider using nuclear weapons against the Third World (at Dien Bien Phu and elsewhere).

Given his politics, I suspect that Macleod has little time for nonviolent revolution (guerilla warfare is the natural strategy for his global insurrectionaries). Nonetheless, PN readers should still find this a politically thought-provoking – as well as entertaining – read.