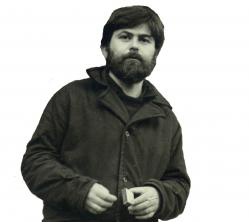 Jeff Cloves on a new book of poems by John Rety, and why poetry matters

There are not so many anarchist pacifist poets in print that we can afford to overlook any one of them. In John Rety’s case he was – what ever else – a hard man to overlook or ignore. He was by nature a (nonviolent) combatant and faced with an empty room he’d have had an argument with himself. A cliché, I know but its truth suited him to the ground. So, this posthumous collection of new and selected poems is a welcome arrival and worthy of attention.

Advertisement
I need an enemy
Everyone else has an enemy
Why haven’t I got one?
Would you like to be my enemy,
If so send CV –
I am an equal opportunities employer
Apply in confidence

I met John rarely, so he was an acquaintance rather than an intimate so, before getting to his poems, a word or two about the publisher’s preface by Martin Parker, the foreword by his friend, Stephen Watts, and the afterword by his dear daughter, Emily Johns. These are splendid pieces of their kind and told me many things I didn’t know about John. In every way they are aids to understanding his work and are doubly valuable for that reason. Some of what Emily has to say was revealed in Milan Rai’s obit of John in March 2010 (PN 2519) but, importantly, she reveals that he was fundamentally insecure about being stateless. He finally became a British cit in 2007:  ‘Again and again through his poems there is the refrain of displacement. his aunt burned his [Hungarian] passport and there was no way back.’ He was in exile for the rest of his life.

Even without this knowledge it’s impossible not to recognise this displacement and it gives cohesive strength and (often angry) loss to his work, which he aids by compression. He can say a lot in very few words and, to my taste, his shortest poems are invariably his best. Emily also tells of: ‘the awful impact on his childhood of the war and the siege of Budapest.’

World War Two
My mother wore a paper shirt
My father wore a hat –
The metal albatrosses
Soon put a stop to that.

I see them faintly smiling still
And a bit surprised at that
For mother sweet was fond of her shirt
While father was at one with his hat.

But fate and destiny jointly declared
An unequal war on my mother’s shirt
And their metal albatrosses
Destroyed my father’s fine hat.

Sometimes there’s an odd un-Englishness about John’s phrasing which reminds you he’s a continental European. I like this and I like the way he often sounds – he has similar wit and brevity – like Jacques Prévert the French pacifist poet and screenwriter.

For a man who wasn’t short of bombast there is an engaging modesty about John’s life and work. He was often loud but not loud-mouthed about the poetry by others he published in his imprint Hearing Eye. About his own poetry he was modest but ironically aware of his worth I feel:

Working on one liner now

The above poem is clever and witty but there’s more to it than that. John had no religion and though he found the world absurd he somehow reached an accommodation:

However absurd
Every moment is different
All we can hope for
Is that as each moment changes
However absurd we should still understand
Each moment’s meaning
Pleasing or unpleasing.

There are lovely poems dedicated to his companion Susan Johns and their daughter Emily in which loss and love and war entangle, but the loss of his parents in particular lurks by inference or sometimes directly in his work:

Address unknown
Mother they are killing each other,
Death is everywhere.
The language you taught me
It’s useless, mother, their bombs
Have made me deaf.
And I live among the living dead.
Otherwise, everything is alright
And I have some wonderful friends
But it looks to me
Something might be done about
The state of the world

Both in his life and his work John tried to do something about the state of the world.

That is what the best poets have always done and do.

From Baker Street to Euston Square
On a rattling hurtling tube train
Early morning very weary
On our way to who knows where
Just as cheerful, just as fair and how
We laughed and smirked and twinkled
(the new jews)
On the last train to Dachau.