Andrew Cornell: Propose and Oppose: Lessons from Movement for a New Society 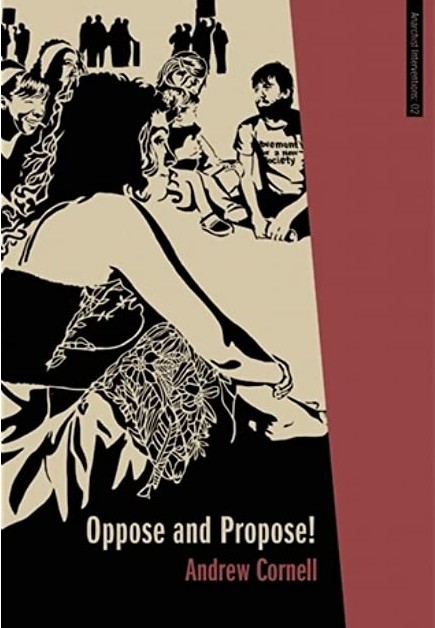 Andrew Cornell’s Oppose and Propose offers an extraordinarily well-researched examination of the 1971-1988 US-based organisation Movement for a New Society (MNS).

Cornell mixes documentary evidence and interviews with key participants in MNS to provide a comprehensive account of the movement, from its roots in Quaker anti-war groups through 17 years of rich and varied history, during which MNS was the only US-wide organisation explicitly advocating and working towards nonviolent revolution.

Cornell’s book has two aims. The first is to register MNS’s place in the peace movement’s heritage. Many aspects of the contemporary movement, including activist training, consensus decision-making, collective living and large-scale direct action campaigns comprised of small affinity groups, were developed and popularised by MNS.

Perhaps most significantly, the emphasis the group placed on personal growth, helping one another deal with classist, racist, sexist and heteronormative privilege and oppression, is now far more common.

Cornell is also keen that we should learn from MNS’s limitations. That MNS was explicitly an experiment in anti-authoritarian, nonviolent revolution demands that we should learn from their mistakes; this is certainly the message that comes from the fascinating interviews in the middle section of the book (with George Lakey’s contributions offering particularly powerful insights).

The key lessons concern the overuse of consensus decision-making (which, while powerful at times, made the organisation conservative in the long run), and the tensions between those members who wanted to focus on the utopian, collective living project, and those whose focus was more squarely on political organising.

These are problems which can be found in today’s movements, and the book offers fertile ground for rethinking these questions.

This is a book by, about and for activists, an experiment in taking our history seriously and learning from past experience. MNS is an important and interesting organisation about which we know too little.

Cornell’s book undertakes the difficult task of capturing their experiment with remarkably-clear style, and a generous but firm analytical perspective. From the spectacular direct actions to the everyday interactions, the movement is presented as a powerful resource, from which we would do well to draw as much inspiration and caution as possible.