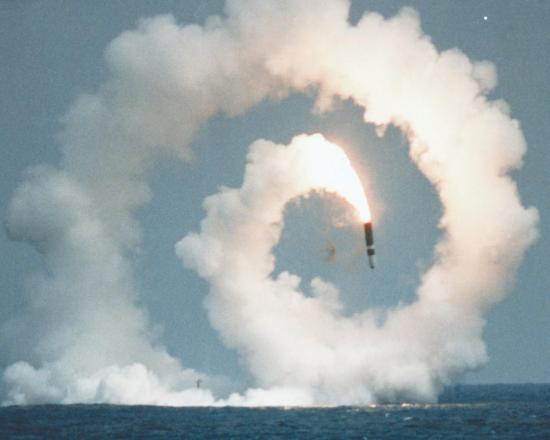 21 March 1989: the first flight test of the new Trident II D-5 nuclear missile (a First Strike weapon) nearly resulted in serious damage to the USS Tennessee, the US submarine which had launched the test missile from just below the surface.photo: US NAVY

Did you know that First Use is government policy?

Nuclear disarmament campaigns have often focused on hardware, on warheads and missiles and submarines.

Nuclear doctrine, or how governments plan to use their nuclear weapons, have had a lot less attention.

This is a pity because there are a lot of easy wins available for the peace movement on doctrine. (Also, the strength of the movement in the 1980s was as much to do with doctrine as it was to do with hardware, I would argue.)

As I noted last issue, an argument can be made that a steady 20 percent of the population has been in favour of unilateral nuclear disarmament all the way through the British nuclear weapons era. I’ve called this solid 20 percent ‘Bruce’s Tribe’ (PN 2661), in honour of the late, much-lamented CND vice-president Bruce Kent.

On the other hand, there is evidence that a massive majority of people in Britain are opposed to the government’s policy of nuclear First Use – being willing to use nuclear weapons on an enemy who hasn’t fired a nuclear weapon themselves. (There are also massive majorities against the policy of making nuclear threats against non-nuclear enemies, but we’ll leave that for another day.)

The latest poll on this was published by polling agency YouGov in September as part of its major ‘Study of War’ project. This poll shows that 81 percent of people in Britain think it ‘could not be acceptable’ to use nuclear weapons first.

(This is in line with the YouGov poll for the Nuclear Education Trust in July, which found that 79 percent of people supported ‘all countries with nuclear weapons committing to a policy of not using nuclear weapons first in a conflict’.)

The Study of War poll asked lots of other questions, allowing us to discover that opposition to First Use is even stronger (88 percent) among people who support the existence of NATO.

We don’t need to persuade people that First Use is wrong. We just need to mobilise them to pressure the government into giving up First Use as an option.

Two issues, here. Firstly, First Use has been not just British, but NATO, nuclear doctrine since at least 1967, when the alliance adopted ‘Flexible Response’.

The name has changed over the years but the basic idea has remained the same. The latest wording came in NATO’s 2022 Strategic Doctrine, in the ‘Core Tasks’ paragraph headed ‘Deterrence and Defence’: ‘We will employ military and non-military tools in a proportionate, coherent and integrated way to respond to all threats to our security in the manner, timing and in the domain of our choosing.’

The second issue is that virtually no one knows that First Use is British government/NATO policy.

Back in the mid-1980s, when the nuclear weapons debate was always on the front page, and Britain was in turmoil over the deployment of US cruise missiles here, an academic survey found that only 7 percent of people knew that First Use was government policy.

The British government is hugely resistant to the idea of adopting a No First Use pledge. With 80 percent of the public on our side, this should be an easy win for the disarmament movement.

First Use vs First Strike

Incidentally, there is a huge difference between First Use and First Strike. The Cambridge Dictionary says: ‘in a nuclear war, [a First Strike is] an attack intended to destroy the enemy’s ability to fire before they have had an opportunity to do so’.

A First Strike capability gives you the ability to launch a disarming pre-emptive attack and prevent nuclear retaliation. It forces your enemy to have a hair-trigger response to any possible nuclear attack (‘use ’em or lose ’em’) which actually makes you both less safe.

The YouGov ‘Study of War’ poll also found that 20 percent of people said, if Britain was attacked with nuclear weapons, they would not support Britain using nuclear weapons in response. Bruce’s Tribe!

Among the 54 percent who supported the idea of nuclear retaliation, there were some interesting differences. Nuclear revenge was favoured by 64 percent of men but only by 45 percent of women.

Only 35 percent of people aged between 16 – 24 supported hitting back with nuclear weapons. Support steadily climbed with age till it nearly doubled at 66 percent among people over 60 years old.

On the other hand, the ‘Study of War’ poll found a lot of resistance to engaging in foreign wars. Only 38 percent of people thought that Britain should get involved in wars ‘to defend its interests around the world’.

The UN has a lot of supporters 46 percent of people also thought the UN should have more influence on member states. Only 9 percent thought it should have less influence. 27 percent didn’t know.

Wars we do and don’t regret

21 March 1989: the first flight test of the new Trident II D-5 nuclear missile (a First Strike weapon) nearly resulted in serious damage to the USS Tennessee, the US submarine which had launched the test missile from just below the surface.photo: US NAVY

Revealing war crimes is not a crime