Revealing war crimes is not a crime 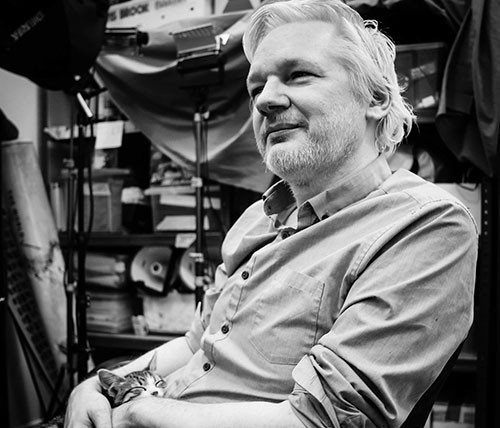 Julian Assange must not be extradited from the UK

WikiLeaks editor and publisher Julian Assange is facing a 175-year sentence for publishing truthful information in the public interest.

Julian Assange is being sought by the current US administration for publishing US government documents which exposed war crimes and human rights abuses. The politically-motivated charges represent an unprecedented attack on press freedom and the public’s right to know – seeking to criminalise basic journalistic activity.

If convicted Julian Assange faces a sentence of 175 years, likely to be spent in isolation which would drive him to commit suicide.

‘The case is a huge scandal and represents the failure of Western rule of law. If Julian Assange is convicted, it will be a death sentence for freedom of the press.’ - Nils Melzer, UN special rapporteur on torture

UK district judge Vanessa Baraitser ruled it would be oppressive to extradite him to the United States of America and refused to extradite him, yet the case eventually moved to the UK supreme court which overruled her decision. The US extradition request then moved forward to the UK home secretary.

Priti Patel, the then home secretary, signed the request to extradite Assange in June.

Assange’s legal team are fighting the extradition and have now filed an appeal to the high court. The high court now must approve the grounds of the appeal.

If the UK extradites Assange it would violate Article 4 of the US-UK extradition treaty which bars extradition for political offences.

Extraditing Julian Assange to the United States would kill him.

Open letter to the US department of justice

February 2021: We, the undersigned press freedom, civil liberties, and international human rights advocacy organisations, write today to share our profound concern about the ongoing criminal and extradition proceedings relating to Julian Assange, the founder of WikiLeaks, under the Espionage Act and the Computer Fraud and Abuse Act.

While our organisations have different perspectives on Mr Assange and his organisation, we share the view that the government’s indictment of him poses a grave threat to press freedom both in the United States and abroad....

The indictment of Mr Assange threatens press freedom because much of the conduct described in the indictment is conduct that journalists engage in routinely – and that they must engage in in order to do the work the public needs them to do.

“Julian Assange shouldn’t be the subject of a grand jury hearing, he should be given a medal. He’s contributing to democracy.” - Noam Chomsky, academic and activist

In our view, such a precedent in this case could effectively criminalise these common journalistic practices.

We appreciate that the government has a legitimate interest in protecting bona fide national security interests, but the proceedings against Mr Assange jeopardise journalism that is crucial to democracy.

The Trump administration positioned itself as an antagonist to the institution of a free and unfettered press in numerous ways. Its abuse of its prosecutorial powers was among the most disturbing.

We are deeply concerned about the way that a precedent created by prosecuting Assange could be leveraged – perhaps by a future administration – against publishers and journalists of all stripes.

Major news organizations share this concern, which is why the announcement of charges against Assange in May 2019 was met with vociferous and nearly universal condemnation from virtually every major American news outlet, even though many of those news outlets have criticized Mr Assange in the past.

“If the US can prosecute a foreign publisher for violating our secrecy laws, there’s nothing preventing China, or Russia, from doing the same [to a US reporter who breaks their secrecy laws]” - Ben Wizner, American Civil Liberties Union

It is our understanding that senior officials in the Obama administration shared this concern as well. Former department of justice spokesperson Matthew Miller told the Washington Post in 2013: ‘The problem the department has always had in investigating Julian Assange is there is no way to prosecute him for publishing information without the same theory being applied to journalists.’

It was reportedly the press freedom implications of any prosecution of Mr Assange that led attorney general Eric Holder’s justice department to decide against indicting him after considering doing so.

It is unfortunately the case that press freedom is under threat globally. Now more than ever, it is crucial that we protect a robust and adversarial press – what judge Murray Gurfein in the Pentagon Papers case memorably called a ‘cantankerous press, an obstinate press, an ubiquitous press’ – in the United States and abroad.

With this end in mind, we respectfully urge you to... dismiss the indictment of Mr Assange.