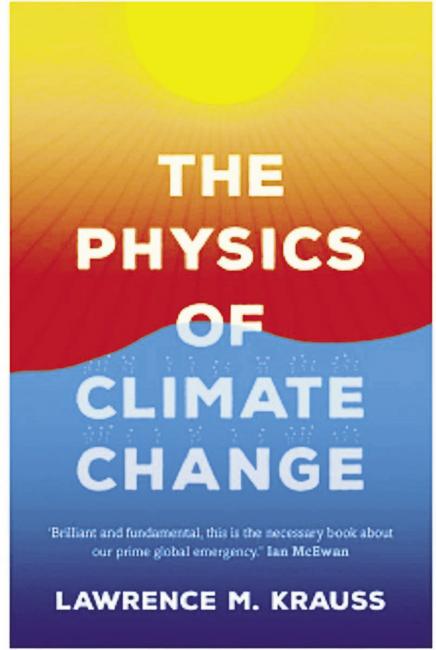 Earlier this year, I received an email from a local Extinction Rebellion (XR) group with the subject line ‘Update your truth’. It stated that ‘[e]ven if we turn off the CO2 [carbon dioxide] tap today, we have already committed future generations to at least 2ºC of additional heating’.

I knew this claim had no basis in current science. Its source was probably XR’s co-founder Roger Hallam. Similar claims from Hallam have been posted to the group’s Facebook page.

It made me think: if you’ve been involved in climate activism over the last 2½ years and are relying on the likes of Hallam for what you (think you) know about climate change, you really need to find yourself some more reliable sources.

Fortunately, if books are your thing, there’s no shortage.

Cosmologist and science writer Lawrence Krauss says that he has written his latest book (which, despite its title, is not a textbook) ‘to demonstrate how an explanation of fundamental physics arguments can give interested laypeople the tools’ to, among other things, ‘make decisions about their own actions and about public policy questions.’

The first half covers fundamental topics (which you may think you already know all about but probably don’t) such as the Keeling curve, the carbon cycle and the physics of the (misnamed) ‘greenhouse effect’.

Though an able populariser, Krauss acknowledges that a large chunk of this material may be ‘something of a slog’ for his readers.

Though I strongly recommend his book, I have to confess that I did find it a slog in places – and I suspect I was more familiar with this material than much of Krauss’s target audience.

Krauss then turns his attention to the impacts that probably are locked-in by past emissions (for example, a minimum sea-level rise of 0.5 metres over the course of the 21st century and a rise in ocean temperatures of almost 0.5 ºC over the next millennium).

One of the many challenges that climate change poses for campaigners is that there isn’t one decisively-persuasive fact.

What makes it worse is that the impact of such changes depend heavily on how we respond to them.

One way around these problems is simply to make stuff up, as Hallam does.

Krauss takes a different path, focussing on the likely impacts on a specific region: the Mekong delta.

Recent research, he notes, suggests that ‘between nineteen and thirty million Vietnamese currently reside on land that will be below the future high tide line as early as 2050’.

‘The richest rice-producing area in the world could be submerged by salty water by the end of this century.’

After a chapter on the basics, Henson proceeds through an exhausting 150-page look at the ‘symptoms’ of climate change. These range from melting glaciers and heat waves, to forest fires and more-intense tropical cyclones.

Henson then goes on to useful backgrounders on ‘how we know what we know about climate change’ and the history of the recent political struggles over the issue. (I would have welcomed a greater focus on potential impacts on the Global South.)

When the book moves on to possible solutions, it begins to show its age.

The public discussion has clearly shifted since the text was revised (post-Paris but pre-Greta Thunberg).

For example, Henson devotes five pages to a 2004 proposal for stabilising emissions, while ‘Net Zero’ (now the buzzword on everyone’s lips) isn’t even in the index.

Perhaps owing to its stated desire to cater to the ‘sceptical’ as well as the ‘alarmed… or simply curious’, The Thinking Person’s Guide to Climate Change has a very ‘measured’ tone.

Moreover, in ballooning from 320 to over 500 pages, the book has lost something of the compact readability of the original, as well as the latter’s valuable resource list of books and websites.

On the other hand, especially if you like long, information-dense non-fiction, it remains a useful resource.

Climate scientist Michael Mann has spent over two decades on the frontlines of the political struggles surveyed by Henson.

In his latest book, The New Climate War, Mann is clear that this is a war.

He notes that ‘if we took the disinformation campaign funded by the fossil fuel industry out of the equation, the climate problem would have been solved decades ago’.

Mann also says that ‘the surest way to lose a war is to refuse to recognise that you’re in one in the first place’.

According to Mann, the nature of the battle has now changed.

While the old climate war was a ‘war on the science’, the new climate war is a ‘war on action’. And the weapons the climate inactivists bring to this battlefield are ‘an array of powerful Ds: disinformation, deceit, divisiveness, deflection, delay, despair-mongering, and doomism’.

After a couple of chapters surveying the old climate war and its origins, Mann recaps the history of past corporate ‘deflection’ campaigns.

Each of these campaigns tried to derail changes to government regulations by placing the burden of responsibility on (the behaviour of) the individual.

Mann then examines how fossil fuel interests and their allies are using these same tools today.

Along the way, Mann debunks Michael Moore’s film Planet of the Humans (which apes fossil fuel industry propaganda seeking to discredit renewable energy as a viable alternative to fossil fuels) and the documentary Cowspiracy (which falsely claimed that livestock was responsible for 51 percent of carbon emissions).

Perhaps surprisingly, Mann devotes the longest chapter of his book to climate doomism (which exaggerates the already dire threats posed by climate change).

Mann claims the flames of doomism ‘are being fanned by polluting interests’ and that it ‘arguably poses a greater threat to climate action than outright denial’.

In a 2019 poll in the US, out of the people who didn’t think anything should be done about climate change, more people (26 percent) ‘cite[d] the belief that there is “nothing we can do about it”’ than said “it’s not happening”’.

But doomism isn’t just an obstacle to action, it’s also not born out by the science.

In one key paragraph, Mann notes that state-of-the-art climate simulations ‘provide no support at all for a runaway warming scenario at even 4º or 5ºC, let alone 3ºC, which is where current policies are now likely taking us as we slowly decarbonize the economy. As for “mass extinction”, the most comprehensive study to date, published in April 2020 in the premier science journal Nature found that less than 2 percent of species assemblages will undergo collapse… from climate change if we keep planetary warming below 2ºC. The number rises to 15 percent if warming reaches 4ºC. That is certainly very troubling, but it doesn’t constitute a “mass extinction” event of the sort that is evident in the geological record.’

Moreover, far from being inevitably doomed, ‘a clean energy revolution and climate stabilisation are achievable with current technology. All we require are policies to incentivise the needed shift.’

So there is urgency, but we also have agency.

In assessing Mann’s book, it helps to draw a distinction between questions of climate science, where I am happy to take Mann as an authority, and questions of political judgement and strategy, where he’s an important voice but cannot have the same authority.

Ultimately, the only thing that is absolutely nonnegotiable in any plan to limit global warming is that it actually works. Everything else can and should be discussed.

Mann has strong views on the strategic merits of the Green New Deal (which he fears may alienate ‘independents and moderate conservatives’) and the various proposals for putting a price on carbon emissions (which he strongly favours, though many on the left are opposed to such approaches).

Politically, Mann appears fairly centrist (he was an adviser to Hillary Clinton’s 2016 election campaign, for example). It’s not clear to me that the forms of bipartisan compromise that he favours are even possible with today’s Republican party.

All three of these books are well worth reading, but if I had to pick one of them to recommend, it would probably be Mann’s.

On the last page of The New Climate War, Mann speculates that in a decade or so we may look back on 2019, or thereabouts, as ‘the turning point on the climate crisis’.

He may turn out to be correct, but until then – as Mann himself would certainly agree – it’s a question of all hands to the plough.